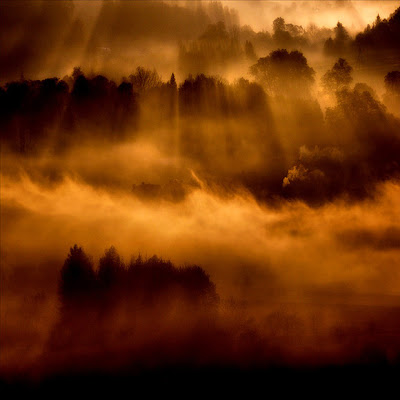 The other day I finally got out of the house and none to early as I had a bad case of cabin fever. I went to my favorite place (Barnes and Nobel) along with my wife and two of my grand kids. Linda took Elizabeth and I had young Michael. Its wasn't long before we found ourselves in the Sci-fi section (Mike loves Star Wars) and I was a bit surprised to learn that he had read almost everything they had. I suggested a Sherlock Holmes book and he said "No, mysteries are boring because I know the answer long before the book tells me about it. I didn't argue with him, because I have no doubt that he does; he is just that smart. I like mysteries and this picture holds one. There probably is a lush blanket of forest behind all that fog, but who knows, I could be in for a surprise. Which is exactly what I like about mysteries in the first place. Its the Ah-ha moment that I enjoy. This passage from the book of Ephesians has one of these moments; I hope you enjoy it.
Eph 3:1-19 For this cause I, Paul, am the prisoner of Christ Jesus on behalf of you Gentiles,2 if it is so that you have heard of the administration of that grace of God which was given me toward you;3 how that by revelation the mystery was made known to me, as I wrote before in few words,4 by which, when you read, you can perceive my understanding in the mystery of Christ;5 which in other generations was not made known to the children of men, as it has now been revealed to his holy apostles and prophets in the Spirit;6 that the Gentiles are fellow heirs, and fellow members of the body, and fellow partakers of his promise in Christ Jesus through the Good News,7 of which I was made a servant, according to the gift of that grace of God which was given me according to the working of his power.8 To me, the very least of all saints, was this grace given, to preach to the Gentiles the unsearchable riches of Christ,9 and to make all men see what is the administration of the mystery which for ages has been hidden in God, who created all things through Jesus Christ;10 to the intent that now through the assembly the manifold wisdom of God might be made known to the principalities and the powers in the heavenly places,11 according to the eternal purpose which he purposed in Christ Jesus our Lord;12 in whom we have boldness and access in confidence through our faith in him.13 Therefore I ask that you may not lose heart at my troubles for you, which are your glory.14 For this cause, I bow my knees to the Father of our Lord Jesus Christ,15 from whom every family in heaven and on earth is named,16 that he would grant you, according to the riches of his glory, that you may be strengthened with power through his Spirit in the inward man;17 that Christ may dwell in your hearts through faith; to the end that you, being rooted and grounded in love,18 may be strengthened to comprehend with all the saints what is the breadth and length and height and depth,19 and to know Christ's love which surpasses knowledge, that you may be filled with all the fullness of God. WEB
God had worked with the Jews for a long, long time. No human could have ever been as patient as God was with them. They were stubborn, rebellious and just plain difficult to work with. But God had a plan; include all humanity. It must have been quite a surprise for the Gentiles to know that God cared for them as well, but there you go.... surprise. The fog has lifted and the beauty of God's will is revealed. Hope for everyone, heaven for everyone and all we have to do is what Jesus wants us to do. Simple, direct, and to the point. No more fog, mystery solved.
Email ThisBlogThis!Share to TwitterShare to FacebookShare to Pinterest
Newer Posts Older Posts Home
Subscribe to: Posts (Atom)