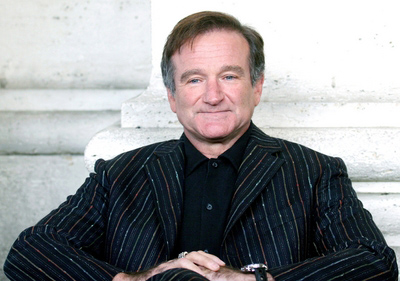 
Robin Williams is a master of comedy.  I especially like his improvisations and this one about the very young AND very smart is one of his best!!!  What we laugh at says a lot about us, for it reveals our prejudices.  When it comes to being a Christian, we are to live beyond prejudice though the love that dwells in our hearts.  This passage from the book of Romans gives us a laundry list that proves helpful...

Romans, Chapter 12
9  Let love be without hypocrisy. Abhor that which is evil. Cling to that which is good.  10 In love of the brothers be tenderly affectionate one to another; in honor preferring one another;  11 not lagging in diligence; fervent in spirit; serving the Lord; 12 rejoicing in hope; enduring in troubles; continuing steadfastly in prayer;  13 contributing to the needs of the saints; given to hospitality.  14 Bless those who persecute you; bless, and don’t curse.  15 Rejoice with those who rejoice. Weep with those who weep.  16 Be of the same mind one toward another. Don’t set your mind on high things, but associate with the humble. Don’t be wise in your own conceits.  17 Repay no one evil for evil. Respect what is honorable in the sight of all men.  18 If it is possible, as much as it is up to you, be at peace with all men.  19 Don’t seek revenge yourselves, beloved, but give place to God’s wrath. For it is written, “Vengeance belongs to me; I will repay, says the Lord.”  20 Therefore
“If your enemy is hungry, feed him.
If he is thirsty, give him a drink;
for in doing so, you will heap coals of fire on his head.”
21  Don’t be overcome by evil, but overcome evil with good.

While we may laugh at a two year old that is savvy about computers, this world is quickly changing into one where the techno-generation will laugh at us for being uncool! The simple truth is that we need to accept others as they are; not for what we want them to be. God's ways are the best ways, no matter if you work with an abaccus or a calculator or a main frame computer (even a pencil and paper works too) God can mold your heart if you are willing!!!
Email ThisBlogThis!Share to TwitterShare to FacebookShare to Pinterest

Zec 2:1 I lifted up my eyes, and saw, and behold, a man with a measuring line in his hand.
Zec 2:2 Then I asked, "Where are you going?" He said to me, "To measure Jerusalem, to see what is its breadth and what is its length."
Zec 2:3 Behold, the angel who talked with me went forth, and another angel went out to meet him,
Zec 2:4 and said to him, "Run, speak to this young man, saying, 'Jerusalem will be inhabited as villages without walls, because of the multitude of men and livestock in it.
Zec 2:5 For I,' says Yahweh, 'will be to her a wall of fire around it, and I will be the glory in the midst of her.
Zec 2:6 Come! Come! Flee from the land of the north,' says Yahweh; 'for I have spread you abroad as the four winds of the sky,' says Yahweh.
Zec 2:7 'Come, Zion! Escape, you who dwell with the daughter of Babylon.'
Zec 2:8 For thus says Yahweh of Armies: 'For honor he has sent me to the nations which plundered you; for he who touches you touches the apple of his eye.
Zec 2:9 For, behold, I will shake my hand over them, and they will be a spoil to those who served them; and you will know that Yahweh of Armies has sent me.
Zec 2:10 Sing and rejoice, daughter of Zion; for, behold, I come, and I will dwell in the midst of you,' says Yahweh.
Zec 2:11 Many nations shall join themselves to Yahweh in that day, and shall be my people; and I will dwell in the midst of you, and you shall know that Yahweh of Armies has sent me to you.
Zec 2:12 Yahweh will inherit Judah as his portion in the holy land, and will again choose Jerusalem.
Zec 2:13 Be silent, all flesh, before Yahweh; for he has roused himself from his holy habitation!"

Zec 3:1 He showed me Joshua the high priest standing before the angel of Yahweh, and Satan standing at his right hand to be his adversary.
Zec 3:2 Yahweh said to Satan, "Yahweh rebuke you, Satan! Yes, Yahweh who has chosen Jerusalem rebuke you! Isn't this a burning stick plucked out of the fire?"
Zec 3:3 Now Joshua was clothed with filthy garments, and was standing before the angel.
Zec 3:4 He answered and spoke to those who stood before him, saying, "Take the filthy garments off of him." To him he said, "Behold, I have caused your iniquity to pass from you, and I will clothe you with rich clothing."
Zec 3:5 I said, "Let them set a clean turban on his head." So they set a clean turban on his head, and clothed him; and the angel of Yahweh was standing by.
Zec 3:6 The angel of Yahweh protested to Joshua, saying,
Zec 3:7 "Thus says Yahweh of Armies: 'If you will walk in my ways, and if you will follow my instructions, then you also shall judge my house, and shall also keep my courts, and I will give you a place of access among these who stand by.
Zec 3:8 Hear now, Joshua the high priest, you and your fellows who sit before you; for they are men who are a sign: for, behold, I will bring forth my servant, the Branch.
Zec 3:9 For, behold, the stone that I have set before Joshua; on one stone are seven eyes: behold, I will engrave its engraving,' says Yahweh of Armies, 'and I will remove the iniquity of that land in one day.
Zec 3:10 In that day,' says Yahweh of Armies, 'you will invite every man his neighbor under the vine and under the fig tree.' "

Rev 15:1 I saw another great and marvelous sign in the sky: seven angels having the seven last plagues, for in them God's wrath is finished.
Rev 15:2 I saw something like a sea of glass mixed with fire, and those who overcame the beast, his image, and the number of his name, standing on the sea of glass, having harps of God.
Rev 15:3 They sang the song of Moses, the servant of God, and the song of the Lamb, saying, "Great and marvelous are your works, Lord God, the Almighty! Righteous and true are your ways, you King of the nations.
Rev 15:4 Who wouldn't fear you, Lord, and glorify your name? For you only are holy. For all the nations will come and worship before you. For your righteous acts have been revealed."
Rev 15:5 After these things I looked, and the temple of the tabernacle of the testimony in heaven was opened.
Rev 15:6 The seven angels who had the seven plagues came out, clothed with pure, bright linen, and wearing golden sashes around their breasts.
Rev 15:7 One of the four living creatures gave to the seven angels seven golden bowls full of the wrath of God, who lives forever and ever.
Rev 15:8 The temple was filled with smoke from the glory of God, and from his power. No one was able to enter into the temple, until the seven plagues of the seven angels would be finished.


Rev 16:1 I heard a loud voice out of the temple, saying to the seven angels, "Go and pour out the seven bowls of the wrath of God on the earth!"
Rev 16:2 The first went, and poured out his bowl into the earth, and it became a harmful and evil sore on the people who had the mark of the beast, and who worshiped his image.
Rev 16:3 The second angel poured out his bowl into the sea, and it became blood as of a dead man. Every living thing in the sea died.
Rev 16:4 The third poured out his bowl into the rivers and springs of water, and they became blood.
Rev 16:5 I heard the angel of the waters saying, "You are righteous, who are and who were, you Holy One, because you have judged these things.
Rev 16:6 For they poured out the blood of the saints and the prophets, and you have given them blood to drink. They deserve this."
Rev 16:7 I heard the altar saying, "Yes, Lord God, the Almighty, true and righteous are your judgments."
Rev 16:8 The fourth poured out his bowl on the sun, and it was given to him to scorch men with fire.
Rev 16:9 People were scorched with great heat, and people blasphemed the name of God who has the power over these plagues. They didn't repent and give him glory.
Rev 16:10 The fifth poured out his bowl on the throne of the beast, and his kingdom was darkened. They gnawed their tongues because of the pain,
Rev 16:11 and they blasphemed the God of heaven because of their pains and their sores. They didn't repent of their works.
Rev 16:12 The sixth poured out his bowl on the great river, the Euphrates. Its water was dried up, that the way might be made ready for the kings that come from the sunrise.
Rev 16:13 I saw coming out of the mouth of the dragon, and out of the mouth of the beast, and out of the mouth of the false prophet, three unclean spirits, something like frogs;
Rev 16:14 for they are spirits of demons, performing signs; which go forth to the kings of the whole inhabited earth, to gather them together for the war of that great day of God, the Almighty.
Rev 16:15 "Behold, I come like a thief. Blessed is he who watches, and keeps his clothes, so that he doesn't walk naked, and they see his shame."
Rev 16:16 He gathered them together into the place which is called in Hebrew, Megiddo.
Rev 16:17 The seventh poured out his bowl into the air. A loud voice came forth out of the temple of heaven, from the throne, saying, "It is done!"
Rev 16:18 There were lightnings, sounds, and thunders; and there was a great earthquake, such as was not since there were men on the earth, so great an earthquake, so mighty.
Rev 16:19 The great city was divided into three parts, and the cities of the nations fell. Babylon the great was remembered in the sight of God, to give to her the cup of the wine of the fierceness of his wrath.
Rev 16:20 Every island fled away, and the mountains were not found.
Rev 16:21 Great hailstones, about the weight of a talent, came down out of the sky on people. People blasphemed God because of the plague of the hail, for this plague is exceedingly severe.