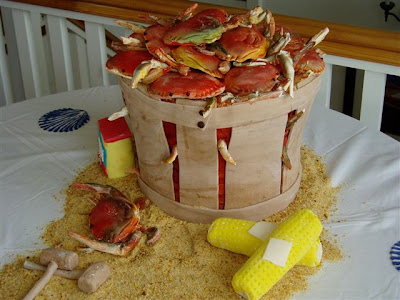 Recently there was a royal wedding in England and their cake reflected their choices.  Here this cake also shows the preferences of the couple and as we can see they must love New England fare.  Cakes are one of my favorite things about weddings, as they symbolize one of the basics in marriage:eating.  Another basic is drinking and there is a passage in the New Testament that discusses drinking in the context of a marriage celebration.
John 2:1-11 (WEB)

1) The third day, there was a marriage in Cana of Galilee. Jesus’ mother was there.
2) Jesus also was invited, with his disciples, to the marriage.
3) When the wine ran out, Jesus’ mother said to him, “They have no wine.”
4) Jesus said to her, “Woman, what does that have to do with you and me? My hour has not yet come.”
5) His mother said to the servants, “Whatever he says to you, do it.”
6) Now there were six water pots of stone set there after the Jews’ way of purifying, containing two or three metretes apiece.
7) Jesus said to them, “Fill the water pots with water.” They filled them up to the brim.
8) He said to them, “Now draw some out, and take it to the ruler of the feast.” So they took it.
9) When the ruler of the feast tasted the water now become wine, and didn’t know where it came from (but the servants who had drawn the water knew), the ruler of the feast called the bridegroom,
10) and said to him, “Everyone serves the good wine first, and when the guests have drunk freely, then that which is worse. You have kept the good wine until now!”
11) This beginning of his signs Jesus did in Cana of Galilee, and revealed his glory; and his disciples believed in him.


I couldn't even guess the number of times I have read this passage over the past 30 or so years, but its a lot. One obvious lesson is that Jesus has the power to change things.  Changing water into wine is a power that could make one a lot of friends to be sure.  The wine, however was not just wine but it was "good wine".  Perhaps the character of the wine was a reflection of the character of Jesus or maybe it was a reflection of Jesus' opinion of the guests... who knows.  Like the cake in the picture above, it will be remembered and perhaps THAT IS THE POINT.
Email ThisBlogThis!Share to TwitterShare to FacebookShare to Pinterest


1Sa 31:1 Now the Philistines fought against Israel: and the men of Israel fled from before the Philistines, and fell down slain on Mount Gilboa.
1Sa 31:2 The Philistines followed hard on Saul and on his sons; and the Philistines killed Jonathan, and Abinadab, and Malchishua, the sons of Saul.
1Sa 31:3 The battle went sore against Saul, and the archers overtook him; and he was greatly distressed by reason of the archers.
1Sa 31:4 Then said Saul to his armor bearer, Draw your sword, and thrust me through therewith, lest these uncircumcised come and thrust me through, and abuse me. But his armor bearer would not; for he was sore afraid. Therefore Saul took his sword, and fell on it.
1Sa 31:5 When his armor bearer saw that Saul was dead, he likewise fell on his sword, and died with him.
1Sa 31:6 So Saul died, and his three sons, and his armor bearer, and all his men, that same day together.
1Sa 31:7 When the men of Israel who were on the other side of the valley, and those who were beyond the Jordan, saw that the men of Israel fled, and that Saul and his sons were dead, they forsook the cities, and fled; and the Philistines came and lived in them.
1Sa 31:8 It happened on the next day, when the Philistines came to strip the slain, that they found Saul and his three sons fallen on Mount Gilboa.
1Sa 31:9 They cut off his head, and stripped off his armor, and sent into the land of the Philistines all around, to carry the news to the house of their idols, and to the people.
1Sa 31:10 They put his armor in the house of the Ashtaroth; and they fastened his body to the wall of Beth Shan.
1Sa 31:11 When the inhabitants of Jabesh Gilead heard concerning him that which the Philistines had done to Saul,
1Sa 31:12 all the valiant men arose, and went all night, and took the body of Saul and the bodies of his sons from the wall of Beth Shan; and they came to Jabesh, and burnt them there.
1Sa 31:13 They took their bones, and buried them under the tamarisk tree in Jabesh, and fasted seven days.

Jun. 19, 20
John 18
Joh 18:1 When Jesus had spoken these words, he went out with his disciples over the brook Kidron, where there was a garden, into which he and his disciples entered.
Joh 18:2 Now Judas, who betrayed him, also knew the place, for Jesus often met there with his disciples.
Joh 18:3 Judas then, having taken a detachment of soldiers and officers from the chief priests and the Pharisees, came there with lanterns, torches, and weapons.
Joh 18:4 Jesus therefore, knowing all the things that were happening to him, went forth, and said to them, "Who are you looking for?"
Joh 18:5 They answered him, "Jesus of Nazareth." Jesus said to them, "I am he." Judas also, who betrayed him, was standing with them.
Joh 18:6 When therefore he said to them, "I am he," they went backward, and fell to the ground.
Joh 18:7 Again therefore he asked them, "Who are you looking for?" They said, "Jesus of Nazareth."
Joh 18:8 Jesus answered, "I told you that I am he. If therefore you seek me, let these go their way,"
Joh 18:9 that the word might be fulfilled which he spoke, "Of those whom you have given me, I have lost none."
Joh 18:10 Simon Peter therefore, having a sword, drew it, and struck the high priest's servant, and cut off his right ear. The servant's name was Malchus.
Joh 18:11 Jesus therefore said to Peter, "Put the sword into its sheath. The cup which the Father has given me, shall I not surely drink it?"
Joh 18:12 So the detachment, the commanding officer, and the officers of the Jews, seized Jesus and bound him,
Joh 18:13 and led him to Annas first, for he was father-in-law to Caiaphas, who was high priest that year.
Joh 18:14 Now it was Caiaphas who advised the Jews that it was expedient that one man should perish for the people.
Joh 18:15 Simon Peter followed Jesus, as did another disciple. Now that disciple was known to the high priest, and entered in with Jesus into the court of the high priest;
Joh 18:16 but Peter was standing at the door outside. So the other disciple, who was known to the high priest, went out and spoke to her who kept the door, and brought in Peter.
Joh 18:17 Then the maid who kept the door said to Peter, "Are you also one of this man's disciples?" He said, "I am not."
Joh 18:18 Now the servants and the officers were standing there, having made a fire of coals, for it was cold. They were warming themselves. Peter was with them, standing and warming himself.
Joh 18:19 The high priest therefore asked Jesus about his disciples, and about his teaching.
Joh 18:20 Jesus answered him, "I spoke openly to the world. I always taught in synagogues, and in the temple, where the Jews always meet. I said nothing in secret.
Joh 18:21 Why do you ask me? Ask those who have heard me what I said to them. Behold, these know the things which I said."
Joh 18:22 When he had said this, one of the officers standing by slapped Jesus with his hand, saying, "Do you answer the high priest like that?"
Joh 18:23 Jesus answered him, "If I have spoken evil, testify of the evil; but if well, why do you beat me?"
Joh 18:24 Annas sent him bound to Caiaphas, the high priest.
Joh 18:25 Now Simon Peter was standing and warming himself. They said therefore to him, "You aren't also one of his disciples, are you?" He denied it, and said, "I am not."
Joh 18:26 One of the servants of the high priest, being a relative of him whose ear Peter had cut off, said, "Didn't I see you in the garden with him?"
Joh 18:27 Peter therefore denied it again, and immediately the rooster crowed.
Joh 18:28 They led Jesus therefore from Caiaphas into the Praetorium. It was early, and they themselves didn't enter into the Praetorium, that they might not be defiled, but might eat the Passover.
Joh 18:29 Pilate therefore went out to them, and said, "What accusation do you bring against this man?"
Joh 18:30 They answered him, "If this man weren't an evildoer, we wouldn't have delivered him up to you."
Joh 18:31 Pilate therefore said to them, "Take him yourselves, and judge him according to your law." Therefore the Jews said to him, "It is not lawful for us to put anyone to death,"
Joh 18:32 that the word of Jesus might be fulfilled, which he spoke, signifying by what kind of death he should die.
Joh 18:33 Pilate therefore entered again into the Praetorium, called Jesus, and said to him, "Are you the King of the Jews?"
Joh 18:34 Jesus answered him, "Do you say this by yourself, or did others tell you about me?"
Joh 18:35 Pilate answered, "I'm not a Jew, am I? Your own nation and the chief priests delivered you to me. What have you done?"
Joh 18:36 Jesus answered, "My Kingdom is not of this world. If my Kingdom were of this world, then my servants would fight, that I wouldn't be delivered to the Jews. But now my Kingdom is not from here."
Joh 18:37 Pilate therefore said to him, "Are you a king then?" Jesus answered, "You say that I am a king. For this reason I have been born, and for this reason I have come into the world, that I should testify to the truth. Everyone who is of the truth listens to my voice."
Joh 18:38 Pilate said to him, "What is truth?" When he had said this, he went out again to the Jews, and said to them, "I find no basis for a charge against him.
Joh 18:39 But you have a custom, that I should release someone to you at the Passover. Therefore do you want me to release to you the King of the Jews?"
Joh 18:40 Then they all shouted again, saying, "Not this man, but Barabbas!" Now Barabbas was a robber.
Email ThisBlogThis!Share to TwitterShare to FacebookShare to Pinterest
Newer Posts Older Posts Home
Subscribe to: Posts (Atom)