Cut it out, or... it hurts to think differently 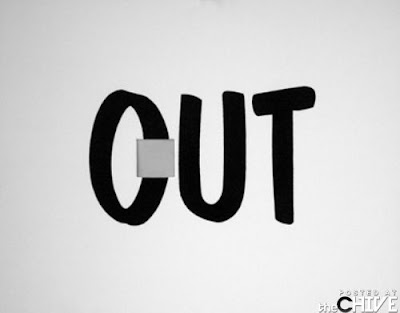 Question: when does one word become two?  Answer: when it is cut out!!!  Neat trick; you just have to visualize it, that all.  Some things are like that; you just have to adjust your thinking and reason.  Even intelligent people have a hard time using their cognitive abilities sometimes, especially when their "attitudes" get in the way.  Here is one example...

[23] On that day Sadducees (those who say that there is no resurrection) came to him. They asked him, [24] saying, “Teacher, Moses said, ‘If a man dies, having no children, his brother shall marry his wife, and raise up seed for his brother.’ [25] Now there were with us seven brothers. The first married and died, and having no seed left his wife to his brother. [26] In the same way, the second also, and the third, to the seventh. [27] After them all, the woman died. [28] In the resurrection therefore, whose wife will she be of the seven? For they all had her.”

[33] When the multitudes heard it, they were astonished at his teaching. [34] But the Pharisees, when they heard that he had silenced the Sadducees, gathered themselves together. [35] One of them, a lawyer, asked him a question, testing him. [36] “Teacher, which is the greatest commandment in the law?”

[41] Now while the Pharisees were gathered together, Jesus asked them a question, [42] saying, "“What do you think of the Christ? Whose son is he?”"

[43] He said to them, "“How then does David in the Spirit call him Lord, saying,

[44] ‘The Lord said to my Lord,
sit on my right hand,
until I make your enemies a footstool for your feet?’

[46] No one was able to answer him a word, neither did any man dare ask him any more questions from that day forth.

The Sadducees thought to trick Jesus by giving him a problem he could not possibly understand.  They were the religious "Ellette" in Israel and knew it, so therefore no one could ever be more correct than they were.  Or so they thought...
BUT, they were wrong and were humiliated.  Next came the Pharisees (separated ones) with another trick question.  They based their reasoning on their belief that all the Law was equal, but they too were proven wrong.  Finally, Jesus asks them a question which shows how much they didn't know about the Scriptures themselves.  They couldn't answer because to do so would have acknowledged the eternality of the Messiah and his greatness.  This would have put them in a position of submission and they knew it, therefore they stopped asking questions out of fear of total humiliation.  Since David was the father of "The Christ" and "The Christ" was greater than him... Jesus must be God.  Something they wanted desperately NOT TO BELIEVE AT ALL COSTS!!!  They could not accept the concept of Jesus being "The Messiah" and God because then they would have to listen to HIM.  Its like looking at the picture and seeing only Cut or only Out.  Its only if you put the two together, you get the message, period.
Email ThisBlogThis!Share to TwitterShare to FacebookShare to Pinterest


Mat 14:1 At that time, Herod the tetrarch heard the report concerning Jesus,
Mat 14:2 and said to his servants, "This is John the Baptizer. He is risen from the dead. That is why these powers work in him."
Mat 14:3 For Herod had laid hold of John, and bound him, and put him in prison for the sake of Herodias, his brother Philip's wife.
Mat 14:4 For John said to him, "It is not lawful for you to have her."
Mat 14:5 When he would have put him to death, he feared the multitude, because they counted him as a prophet.
Mat 14:6 But when Herod's birthday came, the daughter of Herodias danced among them and pleased Herod.
Mat 14:7 Whereupon he promised with an oath to give her whatever she should ask.
Mat 14:8 She, being prompted by her mother, said, "Give me here on a platter the head of John the Baptizer."
Mat 14:9 The king was grieved, but for the sake of his oaths, and of those who sat at the table with him, he commanded it to be given,
Mat 14:10 and he sent and beheaded John in the prison.
Mat 14:11 His head was brought on a platter, and given to the young lady: and she brought it to her mother.
Mat 14:12 His disciples came, and took the body, and buried it; and they went and told Jesus.
Mat 14:13 Now when Jesus heard this, he withdrew from there in a boat, to a deserted place apart. When the multitudes heard it, they followed him on foot from the cities.
Mat 14:14 Jesus went out, and he saw a great multitude. He had compassion on them, and healed their sick.
Mat 14:15 When evening had come, his disciples came to him, saying, "This place is deserted, and the hour is already late. Send the multitudes away, that they may go into the villages, and buy themselves food."
Mat 14:16 But Jesus said to them, "They don't need to go away. You give them something to eat."
Mat 14:17 They told him, "We only have here five loaves and two fish."
Mat 14:18 He said, "Bring them here to me."
Mat 14:19 He commanded the multitudes to sit down on the grass; and he took the five loaves and the two fish, and looking up to heaven, he blessed, broke and gave the loaves to the disciples, and the disciples gave to the multitudes.
Mat 14:20 They all ate, and were filled. They took up twelve baskets full of that which remained left over from the broken pieces.
Mat 14:21 Those who ate were about five thousand men, besides women and children.
Mat 14:22 Immediately Jesus made the disciples get into the boat, and to go ahead of him to the other side, while he sent the multitudes away.
Mat 14:23 After he had sent the multitudes away, he went up into the mountain by himself to pray. When evening had come, he was there alone.
Mat 14:24 But the boat was now in the middle of the sea, distressed by the waves, for the wind was contrary.
Mat 14:25 In the fourth watch of the night, Jesus came to them, walking on the sea.
Mat 14:26 When the disciples saw him walking on the sea, they were troubled, saying, "It's a ghost!" and they cried out for fear.
Mat 14:27 But immediately Jesus spoke to them, saying "Cheer up! It is I! Don't be afraid."
Mat 14:28 Peter answered him and said, "Lord, if it is you, command me to come to you on the waters."
Mat 14:29 He said, "Come!" Peter stepped down from the boat, and walked on the waters to come to Jesus.
Mat 14:30 But when he saw that the wind was strong, he was afraid, and beginning to sink, he cried out, saying, "Lord, save me!"
Mat 14:31 Immediately Jesus stretched out his hand, took hold of him, and said to him, "You of little faith, why did you doubt?"
Mat 14:32 When they got up into the boat, the wind ceased.
Mat 14:33 Those who were in the boat came and worshiped him, saying, "You are truly the Son of God!"
Mat 14:34 When they had crossed over, they came to the land of Gennesaret.
Mat 14:35 When the people of that place recognized him, they sent into all that surrounding region, and brought to him all who were sick,
Mat 14:36 and they begged him that they might just touch the fringe of his garment. As many as touched it were made whole.