This picture reminds me of the Menlo Park Mall area in central New Jersey! If you follow the signs carefully, it does make sense; just don't try to take it in all at once. In a way, life is like this street; there are signs all over the place, all pointing you in different directions. They just have different names; Mother, Father, teachers, coaches, spouses, bosses.... etc.. If you try to follow them all you will just go nowhere and feel very lost. One of the reasons I like Jesus is that he just doesn't beat around the bush... he is straightforward. John chapter 14 says:
Joh 14:1 Let not your heart be troubled: ye believe in God, believe also in me.
Joh 14:2 In my Father's house are many mansions: if it were not so, I would have told you. I go to prepare a place for you.
Joh 14:3 And if I go and prepare a place for you, I will come again and receive you to myself; that where I am, there ye may be also.
Joh 14:4 And whither I go ye know, and the way ye know.
Joh 14:5 Thomas saith to him, Lord, we know not whither thou goest; and how can we know the way?
Joh 14:6 Jesus saith to him, I am the way, and the truth, and the life: no man cometh to the Father, but by me.
The Webster Bible
When Jesus says "I am" in verse six above, he is saying "I, myself am". He points to himself as the way, the truth and the life; notice the repetition of the word "the". This is a definite article, in other words it points to one thing and one thing ONLY. People are either alive or dead, you either have truth or you don't or you have a way to God or you don't. Humm, all of a sudden the "One Way" signs in the picture have just a little more meaning to me. There is only one way to God, not many; make sure you follow the correct "One Way" sign!
Email ThisBlogThis!Share to TwitterShare to FacebookShare to Pinterest 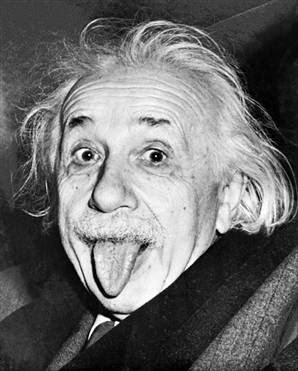 I really like this picture of Albert Einstein because it shows a side of him that is not intellectual. I have known some extremely intelligent people; some whose IQ's were well above Einstein's 160. The thing is, just because people are smart, doesn't mean that they are people you would necessarily want to be around. Often, well educated people are very narrow minded and only want to talk about their field of interest. If you find someone (no matter how smart) who is open to new ideas, that person is truly intelligent. Consider the following passage from the book of Acts:


Act 13:1 And there were certain in Antioch, in the assembly there, prophets and teachers; both Barnabas, and Simeon who is called Niger, and Lucius the Cyrenian, Manaen also--Herod the tetrarch's foster-brother--and Saul;
Act 13:2 and in their ministering to the Lord and fasting, the Holy Spirit said, `Separate ye to me both Barnabas and Saul to the work to which I have called them,'
Act 13:3 then having fasted, and having prayed, and having laid the hands on them, they sent them away.
Act 13:4 These, indeed, then, having been sent forth by the Holy Spirit, went down to Seleucia, thence also they sailed to Cyprus,
Act 13:5 and having come unto Salamis, they declared the word of God in the synagogues of the Jews, and they had also John as a ministrant;
Act 13:6 and having gone through the island unto Paphos, they found a certain magian, a false prophet, a Jew, whose name is Bar-Jesus;
Act 13:7 who was with the proconsul Sergius Paulus, an intelligent man; this one having called for Barnabas and Saul, did desire to hear the word of God,
Act 13:8 and there withstood them Elymas the magian--for so is his name interpreted--seeking to pervert the proconsul from the faith.
Act 13:9 And Saul--who also is Paul--having been filled with the Holy Spirit, and having looked stedfastly on him,
Act 13:10 said, `O full of all guile, and all profligacy, son of a devil, enemy of all righteousness, wilt thou not cease perverting the right ways of the Lord?
Act 13:11 and now, lo, a hand of the Lord is upon thee, and thou shalt be blind, not seeing the sun for a season;' and presently there fell upon him a mist and darkness, and he, going about, was seeking some to lead him by the hand;
Act 13:12 then the proconsul having seen what hath come to pass, did believe, being astonished at the teaching of the Lord.

This magician, this trickster got a lot more than he bargained for. So did the proconsul Sergius Paulus, because he had the opportunity to learn what truth was and that by way of a demonstration of power. It wasn't intelligent discourse, but profound reality that was needed; and the proconsul believed. What is needed in many a life is reality, not relativity or intense cerebral effort. God is a God for all people, not just those blessed with EXCESS BRAIN POWER. So, the next time I feel really smart, I will just stick my tongue out and go to the mirror for a taste of reality (but I won't take any pictures)!!!
Email ThisBlogThis!Share to TwitterShare to FacebookShare to Pinterest
Newer Posts Older Posts Home
Subscribe to: Posts (Atom)