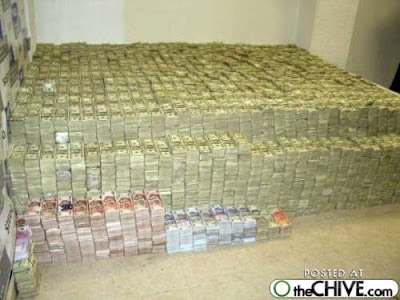 Money, deniero, gitas; whatever you call it, we need it. Although there are some people out there who actually barter instead of using it, most of us use it. What is its real value? Depends on who you talk to. A third world person, a Chinese citizen and Norwegian probably think differently about it. One thing is for certain, the love of it can cause a lot of trouble. Listen to what Paul has to say about it in 1st Timothy.
1Ti 6:1 Let as many as are bondservants under the yoke count their own masters worthy of all honor, that the name of God and the doctrine not be blasphemed.
1Ti 6:2 Those who have believing masters, let them not despise them, because they are brothers, but rather let them serve them, because those who partake of the benefit are believing and beloved. Teach and exhort these things.
1Ti 6:3 If anyone teaches a different doctrine, and doesn't consent to sound words, the words of our Lord Jesus Christ, and to the doctrine which is according to godliness,
1Ti 6:4 he is conceited, knowing nothing, but obsessed with arguments, disputes, and word battles, from which come envy, strife, reviling, evil suspicions,
1Ti 6:5 constant friction of people of corrupt minds and destitute of the truth, who suppose that godliness is a means of gain. Withdraw yourself from such.
1Ti 6:6 But godliness with contentment is great gain.
1Ti 6:7 For we brought nothing into the world, and we certainly can't carry anything out.
1Ti 6:8 But having food and clothing, we will be content with that.
1Ti 6:9 But those who are determined to be rich fall into a temptation and a snare and many foolish and harmful lusts, such as drown men in ruin and destruction.
1Ti 6:10 For the love of money is a root of all kinds of evil. Some have been led astray from the faith in their greed, and have pierced themselves through with many sorrows.
1Ti 6:11 But you, man of God, flee these things, and follow after righteousness, godliness, faith, love, patience, and gentleness.
Some things are more important than money; family, love, your next breath. Oh, yes, and how about your life eternal. Pretty important stuff, all. While looking at the picture of money might make you think about how nice it would be to have it, remember what happened in Germany prior to World War II; huge amounts of it were needed to buy even a loaf of bread. The value of the greenback can change just like the value of your 401K . Verse 11 is the safest path; it isn't a green one, but it will help enter the pearly gates.
Email ThisBlogThis!Share to TwitterShare to FacebookShare to Pinterest
Newer Posts Older Posts Home
Subscribe to: Posts (Atom)