From Gary... I am ashamed 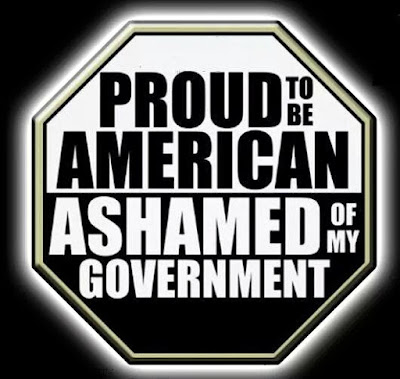 Our government is broken. We have elected people to leadership who are bent on destroying everything that Americans of previous generations hold dear.  The government has become the enemy of those who hold to the teachings of the Bible. During my lifetime, the freedoms which I love so much are being hindered, restricted and removed. Even ancient Rome with all its power did not have the ability to control individual lives the way modern society can. I fear that my children and grandchildren will become virtual slaves in a unabashedly godless totalitarian state.

Soon, very soon, every person who calls themselves a Christian, will be given a choice: either obey ungodly laws (and deny Jesus, The Christ of God) or be  financially ruined, imprisoned, or possibly worse.

Consider...
Matthew, Chapter 10 (WEB)
24  “A disciple is not above his teacher, nor a servant above his lord.  25  It is enough for the disciple that he be like his teacher, and the servant like his lord. If they have called the master of the house Beelzebul, how much more those of his household!   26  Therefore don’t be afraid of them, for there is nothing covered that will not be revealed; and hidden that will not be known.   27  What I tell you in the darkness, speak in the light; and what you hear whispered in the ear, proclaim on the housetops.   28  Don’t be afraid of those who kill the body, but are not able to kill the soul. Rather, fear him who is able to destroy both soul and body in Gehenna.
29  “Aren’t two sparrows sold for an assarion coin?  Not one of them falls on the ground apart from your Father’s will,   30  but the very hairs of your head are all numbered.   31  Therefore don’t be afraid. You are of more value than many sparrows.   32  Everyone therefore who confesses me before men, him I will also confess before my Father who is in heaven.   33  But whoever denies me before men, him I will also deny before my Father who is in heaven.
34  “Don’t think that I came to send peace on the earth. I didn’t come to send peace, but a sword.   35  For I came to set a man at odds against his father, and a daughter against her mother, and a daughter-in-law against her mother-in-law.   36  A man’s foes will be those of his own household.   37  He who loves father or mother more than me is not worthy of me; and he who loves son or daughter more than me isn’t worthy of me.   38  He who doesn’t take his cross and follow after me, isn’t worthy of me.   39  He who seeks his life will lose it; and he who loses his life for my sake will find it.

Christians: Do whatever it takes to be faithful. Follow Jesus regardless of the cost!  I will do my best to heed my own advice- I pray that you will do the same!!!

I encourage you to vote for only those people who hold to the same beliefs as you do. I pray that the day will never come when I have to leave this country in search of freedom.

The United States of America