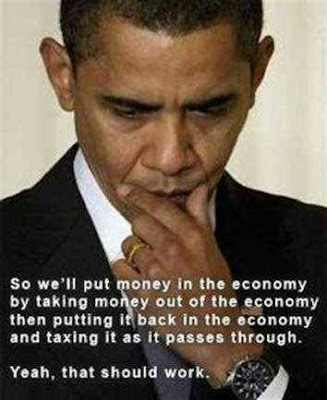 I am confused and that doesn't happen often. How is just printing money going to help? If there is more money out there, doesn't that cause each individual dollar to be worth less? So, what next? Are we to really sit idly by and do nothing? Not at all; we have a great power at our disposal called prayer and we know that God works all things out in his own time. But its MONEY; YOU KNOW, THE STUFF WE NEED TO LIVE? Money can be a spiritual trap and its trust a disciples downfall. Jesus had to deal with those who would try to trick him and here is how HE DEALT WITH IT!

Matthew
Mat 22:15 Then the Pharisees went and took counsel how they might entrap him in his talk.
Mat 22:16 They sent their disciples to him, along with the Herodians, saying, "Teacher, we know that you are honest, and teach the way of God in truth, no matter who you teach, for you aren't partial to anyone.
Mat 22:17 Tell us therefore, what do you think? Is it lawful to pay taxes to Caesar, or not?"
Mat 22:18 But Jesus perceived their wickedness, and said, "Why do you test me, you hypocrites?
Mat 22:19 Show me the tax money." They brought to him a denarius.
Mat 22:20 He asked them, "Whose is this image and inscription?"
Mat 22:21 They said to him, "Caesar's." Then he said to them, "Give therefore to Caesar the things that are Caesar's, and to God the things that are God's."
Mat 22:22 When they heard it, they marveled, and left him, and went away.

Jesus' attitude should be ours; let the government govern, that is their job. Our president is trying to do his job; LET HIM! Let the government print its dollars; it doesn't have to make sense (or cents, if you think about its true worth), God is ultimately in control. Our worries will subside in direct proportion to our faith. Have faith, pray and don't stop praying, I think our country needs it!
Email ThisBlogThis!Share to TwitterShare to FacebookShare to Pinterest 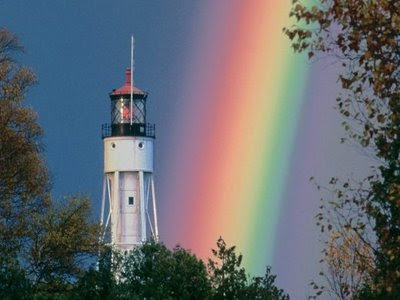 There is an Irish tale that says there is a pot of gold at the end of the rainbow and there's the end, but where is the gold? Its right in front of you but you can't see it. No, I am not trying to confuse you, just to make a point; the lighthouse is gold to the seamen when the light is on. This little item could save their lives and that's worth more than any bar of gold anyone could dream up. Apart from the physical lighthouse, there is the light it shines forth; light to guide, to illuminate, to provide a safe haven of rest. I like what the apostle John has to say at the beginning of his book about light.
Joh 1:1 In the beginning was the Word, and the Word was with God, and the Word was God.
Joh 1:2 The same was in the beginning with God.
Joh 1:3 All things were made through him. Without him was not anything made that has been made.
Joh 1:4 In him was life, and the life was the light of men.
Joh 1:5 The light shines in the darkness, and the darkness hasn't overcome it.
Joh 1:6 There came a man, sent from God, whose name was John.
Joh 1:7 The same came as a witness, that he might testify about the light, that all might believe through him.
Joh 1:8 He was not the light, but was sent that he might testify about the light.
Joh 1:9 The true light that enlightens everyone was coming into the world.
Joh 1:10 He was in the world, and the world was made through him, and the world didn't recognize him.
Joh 1:11 He came to his own, and those who were his own didn't receive him.
Joh 1:12 But as many as received him, to them he gave the right to become God's children, to those who believe in his name:
Joh 1:13 who were born not of blood, nor of the will of the flesh, nor of the will of man, but of God.
Joh 1:14 The Word became flesh, and lived among us. We saw his glory, such glory as of the one and only Son of the Father, full of grace and truth.
Joh 1:15 John testified about him. He cried out, saying, "This was he of whom I said, 'He who comes after me has surpassed me, for he was before me.' "
Joh 1:16 From his fullness we all received grace upon grace.
Joh 1:17 For the law was given through Moses. Grace and truth came through Jesus Christ.
Joh 1:18 No one has seen God at any time. The one and only Son, who is in the bosom of the Father, he has declared him.
World English Bible
Jesus made light and life, became light and life and gives light and life to those who will see it. Not everyone can, but when illuminated with spiritual power, understanding and change is possible. This change is like being born all over again and with this new spiritual insight life becomes new. So, don't look for gold, rather, look for insight from Jesus, because HE is the message from the father and that message is really good news to those who see what HE IS SAYING.
Email ThisBlogThis!Share to TwitterShare to FacebookShare to Pinterest
Newer Posts Older Posts Home
Subscribe to: Posts (Atom)