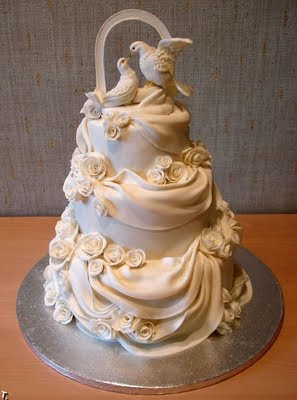 This is one beautiful wedding cake! A Russian creation, it speaks of love in a way much better than mere words. Love can mean many things, but when it comes to a wedding; happiness filled with expectation is all I seem to be able to think of. Here is a passage from the book of John to think about.
John 2:1-11 (WEB)
1) The third day, there was a marriage in Cana of Galilee. Jesus’ mother was there.
2) Jesus also was invited, with his disciples, to the marriage.
3) When the wine ran out, Jesus’ mother said to him, “They have no wine.”
4) Jesus said to her, “Woman, what does that have to do with you and me? My hour has not yet come.”
5) His mother said to the servants, “Whatever he says to you, do it.”
6) Now there were six water pots of stone set there after the Jews’ way of purifying, containing two or three metretes apiece.
7) Jesus said to them, “Fill the water pots with water.” They filled them up to the brim.
8) He said to them, “Now draw some out, and take it to the ruler of the feast.” So they took it.
9) When the ruler of the feast tasted the water now become wine, and didn’t know where it came from (but the servants who had drawn the water knew), the ruler of the feast called the bridegroom,
10) and said to him, “Everyone serves the good wine first, and when the guests have drunk freely, then that which is worse. You have kept the good wine until now!”
11) This beginning of his signs Jesus did in Cana of Galilee, and revealed his glory; and his disciples believed in him.
(John 2:1-11, WEB)

What kind of gifts does the newly wedded couple receive? One thing is for sure, you can count on at least one toaster oven (except, of course, if the couple registered at some fancy shop beforehand), Jesus gave the gift of wine (we can argue all day about whether it was alcoholic or not) and that was an unusual gift, but quite appropriate. Like the cake, it produced joy and touched the human heart. For those who saw BEYOND THE WINE, it must have been one of those "AAAHH" moments. I wonder, did they have the cake before or after the wine? Doesn't really matter, does it; just as long as love filled the room! God has a talent for producing that in abundance.
Email ThisBlogThis!Share to TwitterShare to FacebookShare to Pinterest
Newer Posts Older Posts Home
Subscribe to: Posts (Atom)