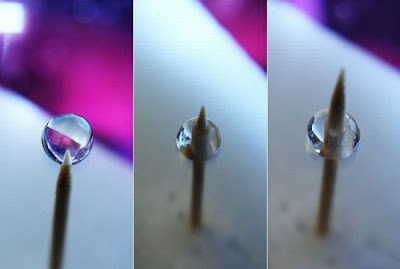 Some things are just hard to accept! I had to look twice at this one because I didn't think it was possible. How? I just asking myself, HOW? However, seeing is believing, but I wonder: was it photo-shopped? When I saw this, I thought of this passage from the New Testament.
Acts 7:51-60 (WEB)
51) “You stiff-necked and uncircumcised in heart and ears, you always resist the Holy Spirit! As your fathers did, so you do.
52) Which of the prophets didn’t your fathers persecute? They killed those who foretold the coming of the Righteous One, of whom you have now become betrayers and murderers.
53) You received the law as it was ordained by angels, and didn’t keep it!”
54) Now when they heard these things, they were cut to the heart, and they gnashed at him with their teeth.
55) But he, being full of the Holy Spirit, looked up steadfastly into heaven, and saw the glory of God, and Jesus standing on the right hand of God,
56) and said, “Behold, I see the heavens opened, and the Son of Man standing at the right hand of God!”
57) But they cried out with a loud voice, and stopped their ears, and rushed at him with one accord.
58) They threw him out of the city, and stoned him. The witnesses placed their garments at the feet of a young man named Saul.
59) They stoned Stephen as he called out, saying, “Lord Jesus, receive my spirit!”
60) He kneeled down, and cried with a loud voice, “Lord, don’t hold this sin against them!” When he had said this, he fell asleep.

Stephen delivered a very long sermon and in the first few verses of this passage we see the conclusion. The hearers were upset (to say the least) and then Stephen went over the top with the reference to Jesus in heaven (55 & 56). The result of all this was Stephen's execution and cry for mercy for those who killed him. The last part is very emotional, but I can't help but focus on 55 & 56 because Stephen does something that I can't do: He looks into heaven and sees Jesus! Yet, it happened and that is that. Maybe someday God will explain it (and a lot of other things) to me, but for now, I just have to accept it by faith. As far as the water and the toothpick business, maybe someone out there could try it and let me know if it actually works. Maybe then I will get the point (pun intended).
Email ThisBlogThis!Share to TwitterShare to FacebookShare to Pinterest
Newer Posts Older Posts Home
Subscribe to: Posts (Atom)