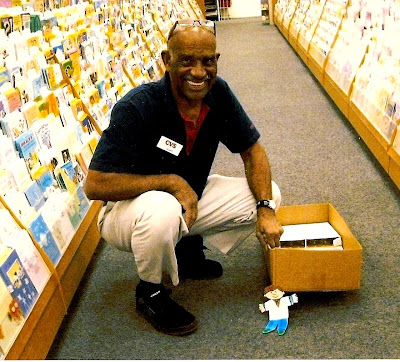 This picture is of Peter Smith, who among other things, manages Hallmark cards for CVS in Seffner, Florida. If you ever have an opportunity to meet him you are in for a treat; he is one very optimistic, hard working man! Although he is a senior citizen, he acts and works like someone much, much younger. While I thinking about him today, I thought of someone a great deal like him; none other than Caleb himself.

Joshua 14:5-14 WEB (R)
(5) The children of Israel did as Yahweh commanded Moses, and they divided the land.
(6) Then the children of Judah drew near to Joshua in Gilgal. Caleb the son of Jephunneh the Kenizzite said to him, "You know the thing that Yahweh spoke to Moses the man of God concerning me and concerning you in Kadesh Barnea.
(7) I was forty years old when Moses the servant of Yahweh sent me from Kadesh Barnea to spy out the land. I brought him word again as it was in my heart.
(8) Nevertheless, my brothers who went up with me made the heart of the people melt; but I wholly followed Yahweh my God.
(9) Moses swore on that day, saying, 'Surely the land where you walked shall be an inheritance to you and to your children forever, because you have wholly followed Yahweh my God.'
(10) Now, behold, Yahweh has kept me alive, as he spoke, these forty-five years, from the time that Yahweh spoke this word to Moses, while Israel walked in the wilderness. Now, behold, I am eighty-five years old, today.
(11) As yet I am as strong today as I was in the day that Moses sent me: as my strength was then, even so is my strength now for war, to go out and to come in.
(12) Now therefore give me this hill country, of which Yahweh spoke in that day; for you heard in that day how the Anakim were there, and great and fortified cities. It may be that Yahweh will be with me, and I shall drive them out, as Yahweh spoke."
(13) Joshua blessed him; and he gave Hebron to Caleb the son of Jephunneh for an inheritance.
(14) Therefore Hebron became the inheritance of Caleb the son of Jephunneh the Kenizzite to this day; because he wholly followed Yahweh, the God of Israel.

As you may recall, Joshua and Caleb were the two optimistic spies who evaluated the promised land for the tribes of Israel. Of the people who originally came out of Egypt, only these two made it into the promised land. And Caleb, at eight-five picks the most difficult to conquer (because of the Anakim giants) and does it!! All this goes to show you that it is attitude that is the predominant factor in success; age is secondary. Just as Caleb was a success at what he chose to do, so is Peter; in both cases a positive attitude is something you can't help but notice!!!
Email ThisBlogThis!Share to TwitterShare to FacebookShare to Pinterest
Newer Posts Older Posts Home
Subscribe to: Posts (Atom)