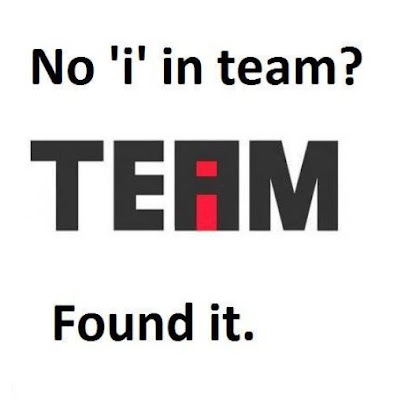 Leave it to someone to come up with this little bit of absurdity.  A team is a collection of people knit together somehow to accomplish something.  If there is a team, then there is no "I".  Why someone who manipulate "team" is beyond me; I can only guess why.  Like it or not, we are all part of a "team"; its called the human race.  We all the same condition: We are human beings with the same condition; we are born, we grow old and die.  But, a select few of us have another "team", that is, we are gathered together with Christ unto heaven, where we will "win" forever.  The apostle Paul puts it this way...
World English Bible: Ephesians Chapter 2
[11] Therefore remember that once you, the Gentiles in the flesh, who are called “uncircumcision” by that which is called “circumcision,” (in the flesh, made by hands); [12] that you were at that time separate from Christ, alienated from the commonwealth of Israel, and strangers from the covenants of the promise, having no hope and without God in the world. [13] But now in Christ Jesus you who once were far off are made near in the blood of Christ. [14] For he is our peace, who made both one, and broke down the middle wall of partition, [15] having abolished in the flesh the hostility, the law of commandments contained in ordinances, that he might create in himself one new man of the two, making peace; [16] and might reconcile them both in one body to God through the cross, having killed the hostility thereby. [17] He came and preached peace to you who were far off and to those who were near. [18] For through him we both have our access in one Spirit to the Father. [19] So then you are no longer strangers and foreigners, but you are fellow citizens with the saints, and of the household of God, [20] being built on the foundation of the apostles and prophets, Christ Jesus himself being the chief cornerstone; [21] in whom the whole building, fitted together, grows into a holy temple in the Lord; [22] in whom you also are built together for a habitation of God in the Spirit.
Each of us are individuals, with our own peculiar characteristics and talents.  But Christ has brought us together in HIM to be a body, a group, "a team" that has restored fellowship with God.  If there is an "I" in this team, its Christ and that's really what is important, isn't it?
Email ThisBlogThis!Share to TwitterShare to FacebookShare to Pinterest


Gen 7:1 Yahweh said to Noah, "Come with all of your household into the ship, for I have seen your righteousness before me in this generation.
Gen 7:2 You shall take seven pairs of every clean animal with you, the male and his female. Of the animals that are not clean, take two, the male and his female.
Gen 7:3 Also of the birds of the sky, seven and seven, male and female, to keep seed alive on the surface of all the earth.
Gen 7:4 In seven days, I will cause it to rain on the earth for forty days and forty nights. Every living thing that I have made, I will destroy from the surface of the ground."
Gen 7:5 Noah did everything that Yahweh commanded him.
Gen 7:6 Noah was six hundred years old when the flood of waters came on the earth.
Gen 7:7 Noah went into the ship with his sons, his wife, and his sons' wives, because of the waters of the flood.
Gen 7:8 Clean animals, animals that are not clean, birds, and everything that creeps on the ground
Gen 7:9 went by pairs to Noah into the ship, male and female, as God commanded Noah.
Gen 7:10 It happened after the seven days, that the waters of the flood came on the earth.
Gen 7:11 In the six hundredth year of Noah's life, in the second month, on the seventeenth day of the month, on the same day all the fountains of the great deep were burst open, and the sky's windows were opened.
Gen 7:12 The rain was on the earth forty days and forty nights.
Gen 7:13 In the same day Noah, and Shem, Ham, and Japheth, the sons of Noah, and Noah's wife, and the three wives of his sons with them, entered into the ship;
Gen 7:14 they, and every animal after its kind, all the livestock after their kind, every creeping thing that creeps on the earth after its kind, and every bird after its kind, every bird of every sort.
Gen 7:15 They went to Noah into the ship, by pairs of all flesh with the breath of life in them.
Gen 7:16 Those who went in, went in male and female of all flesh, as God commanded him; and Yahweh shut him in.
Gen 7:17 The flood was forty days on the earth. The waters increased, and lifted up the ship, and it was lifted up above the earth.
Gen 7:18 The waters prevailed, and increased greatly on the earth; and the ship floated on the surface of the waters.
Gen 7:19 The waters prevailed exceedingly on the earth. All the high mountains that were under the whole sky were covered.
Gen 7:20 The waters prevailed fifteen cubits upward, and the mountains were covered.
Gen 7:21 All flesh died that moved on the earth, including birds, livestock, animals, every creeping thing that creeps on the earth, and every man.
Gen 7:22 All in whose nostrils was the breath of the spirit of life, of all that was on the dry land, died.
Gen 7:23 Every living thing was destroyed that was on the surface of the ground, including man, livestock, creeping things, and birds of the sky. They were destroyed from the earth. Only Noah was left, and those who were with him in the ship.
Gen 7:24 The waters prevailed on the earth one hundred fifty days.

Jan. 7,8
Matthew 4
Mat 4:1 Then Jesus was led up by the Spirit into the wilderness to be tempted by the devil.
Mat 4:2 When he had fasted forty days and forty nights, he was hungry afterward.
Mat 4:3 The tempter came and said to him, "If you are the Son of God, command that these stones become bread."
Mat 4:4 But he answered, "It is written, 'Man shall not live by bread alone, but by every word that proceeds out of the mouth of God.' "
Mat 4:5 Then the devil took him into the holy city. He set him on the pinnacle of the temple,
Mat 4:6 and said to him, "If you are the Son of God, throw yourself down, for it is written, 'He will put his angels in charge of you.' and, 'On their hands they will bear you up, so that you don't dash your foot against a stone.' "
Mat 4:7 Jesus said to him, "Again, it is written, 'You shall not test the Lord, your God.' "
Mat 4:8 Again, the devil took him to an exceedingly high mountain, and showed him all the kingdoms of the world, and their glory.
Mat 4:9 He said to him, "I will give you all of these things, if you will fall down and worship me."
Mat 4:10 Then Jesus said to him, "Get behind me, Satan! For it is written, 'You shall worship the Lord your God, and you shall serve him only.' "
Mat 4:11 Then the devil left him, and behold, angels came and served him.
Mat 4:12 Now when Jesus heard that John was delivered up, he withdrew into Galilee.
Mat 4:13 Leaving Nazareth, he came and lived in Capernaum, which is by the sea, in the region of Zebulun and Naphtali,
Mat 4:14 that it might be fulfilled which was spoken through Isaiah the prophet, saying,
Mat 4:15 "The land of Zebulun and the land of Naphtali, toward the sea, beyond the Jordan, Galilee of the Gentiles,
Mat 4:16 the people who sat in darkness saw a great light, to those who sat in the region and shadow of death, to them light has dawned."
Mat 4:17 From that time, Jesus began to preach, and to say, "Repent! For the Kingdom of Heaven is at hand."
Mat 4:18 Walking by the sea of Galilee, he saw two brothers: Simon, who is called Peter, and Andrew, his brother, casting a net into the sea; for they were fishermen.
Mat 4:19 He said to them, "Come after me, and I will make you fishers for men."
Mat 4:20 They immediately left their nets and followed him.
Mat 4:21 Going on from there, he saw two other brothers, James the son of Zebedee, and John his brother, in the boat with Zebedee their father, mending their nets. He called them.
Mat 4:22 They immediately left the boat and their father, and followed him.
Mat 4:23 Jesus went about in all Galilee, teaching in their synagogues, preaching the Good News of the Kingdom, and healing every disease and every sickness among the people.
Mat 4:24 The report about him went out into all Syria. They brought to him all who were sick, afflicted with various diseases and torments, possessed with demons, epileptics, and paralytics; and he healed them.
Mat 4:25 Great multitudes from Galilee, Decapolis, Jerusalem, Judea and from beyond the Jordan followed him.
Email ThisBlogThis!Share to TwitterShare to FacebookShare to Pinterest