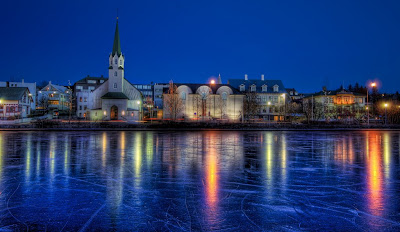 This is one beautiful picture!! I really enjoy the lights reflecting off the ice, but when I took a second look it made me think a little. The reflections in this scene are a little different from those on the lake scene I have on my desktop; they do not give as distinct image and there is some blurring. Why? Well, probably something about the way a crystal water molecule reflects light compared to liquid water. As I thought some more about it, it reminded me of this passage from the book of Exodus.

Exo 7:9 "When Pharaoh speaks to you, saying, 'Perform a miracle!' then you shall tell Aaron, 'Take your rod, and cast it down before Pharaoh, that it become a serpent.' "
Exo 7:10 Moses and Aaron went in to Pharaoh, and they did so, as Yahweh had commanded: and Aaron cast down his rod before Pharaoh and before his servants, and it became a serpent.
Exo 7:11 Then Pharaoh also called for the wise men and the sorcerers. They also, the magicians of Egypt, did in like manner with their enchantments.
Exo 7:12 For they cast down every man his rod, and they became serpents: but Aaron's rod swallowed up their rods.
Exo 7:13 Pharaoh's heart was hardened, and he didn't listen to them; as Yahweh had spoken.
World English Bible

Pharaoh's hard heart saw things a little differently after his people imitated God's miracle. I wonder how Pharaoh felt When Aaron's rod swallowed the sorcerers' serpents? I would guess that by this time, he had reduced this episode to just a battle of tricksters, so perhaps in his mind God was just a better magician. How could this be? Look again at the picture; the hard, hard ice changes an accurate reflection to a distorted one.......... just like the hardness of Pharaoh's heart. Stubbornness and pride freeze a normal heart into one that changes the perception of everything. So, where do you go from here? A good place to start would be to pray for an early spring thaw. In the meantime, anyone have an extra pair of skates?
Email ThisBlogThis!Share to TwitterShare to FacebookShare to Pinterest
Newer Posts Older Posts Home
Subscribe to: Posts (Atom)