From Jim McGuiggan... Church Unity And Who We Are

Church Unity And Who We Are

Connected to that there's another engine that feeds our eager attempts to maintain our unity; there's the vision of who we are. Paul makes the astonishing claim that that for which God exercised his power in Jesus Christ he pursues through us the church or body of Christ (1:19). And in 3:10 he says that the church is a witness to all the powers in the universe that God has summed up and reconciled all things in heaven and on earth in Jesus Christ (Ephesians 1:10, 21-23 with Colossians 1:20). To say we have some inner superiority over the rest of creation would be silly since our place in all this is sheer gift and privilege (1:3-14). Still, here we are, God's community of witness to the universe and all in it! And we're told that that role as witness will never end (3:20-21).

Witness to the whole creation? Do we hold out hope only for ourselves? Hardly! Surely we hold out hope for the entire human race. And is that all (as if it were not enough)? Isn't there a groaning creation in Romans 8:18-22 that keeps a longing eye on us, waiting for the day of our complete glorification? Looking to us because we have the Holy Spirit as pledge that such groaning is not in vain? Aren't the groans coming to us from every quarter? There are the three-legged cats with piteous meows, collapsed old bridges with their ribs jammed into dried up riverbeds, creaking and protesting in the wind. There are the derelict buildings with windows that are really eyes without souls where ghostly winds enter and moan up and down in the deserted halls and then there are the tired old dogs like "Jordan" with stomach tumours and deep eyes full of questions. Do we confront all that and speak hope to the emptiness, weariness and longing? Is that who we are? If so, no wonder he says we should be eager to maintain church unity because the reconciled Community is a promise of a larger restoration and reconciliation.
And are there beings in those "heavenly places" who have sinned against God to whom forgiveness is possible through an atonement wrought by God here on this little out-of-the-way planet? If there are and if it's possible then perhaps our witness that the holy love of God met sin even beyond the stars and made atonement for it is even grander than we know it is. Does it matter to other worlds that we protect and nurture the unity of the Spirit that has been created by the Father through his Son? Is that possible? Do the scriptures allow for that? If so, no wonder our gallant God so passionately put his shoulder to the foundation of sin's wall. If so, shouldn't we be ashamed not to join him in it? Worse, should we be ten thousand times ten thousand times ashamed if we got in his way? 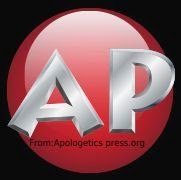 Christendom is conspicuous for the myriad of names worn by individuals and churches—from “Catholic” and “Protestant” to Baptist, Methodist, Presbyterian, Pentecostal, Jehovah’s Witnesses, Episcopalian, and an innumerable host of others. Those who employ these terms to identify their religious orientation also would claim to be “Christian”—as if the secondary terms are simply further refinements or clarifications of the broader, more basic designation of Christian.
Whence did these names arise? History answers this question for each name. For example, “Catholic” simply means “comprehensive” or “universal.” The Catholic Church therefore wishes to emphasize that it constitutes the universal church. “Baptist” is connected to the Greek word for immersion, and thus represents the wearer’s conviction that baptism is by immersion. A “Baptist” is an “immersionist.” “Presbyterian” comes from the Greek word presbuteros, which refers to the form of government by which the church is to be organized. A “presbyter” in the New Testament was one of a plurality of elders who functioned as the leaders or overseers of the local congregation. “Pentecostal” refers to the day of Pentecost in Acts 2 when the Holy Spirit empowered the apostles to speak in tongues. Thus a “Pentecostal” is one who believes in the miraculous gifts of the Spirit. All other names, terms, and designations by which people who claim to be Christian refer to themselves may also be explained on the basis of some doctrine or feature of Christianity that historically came to receive special emphasis among a specific group of people.
What does the New Testament have to say about this state of affairs? Does Christ sanction the use of differing names and terms to identify individuals and churches? Perhaps the place to begin is in the Old Testament when the messianic prophet Isaiah predicted that the day would come when God would implement a “new name:” 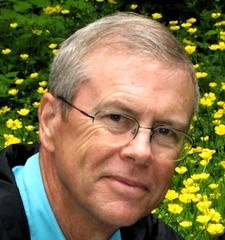 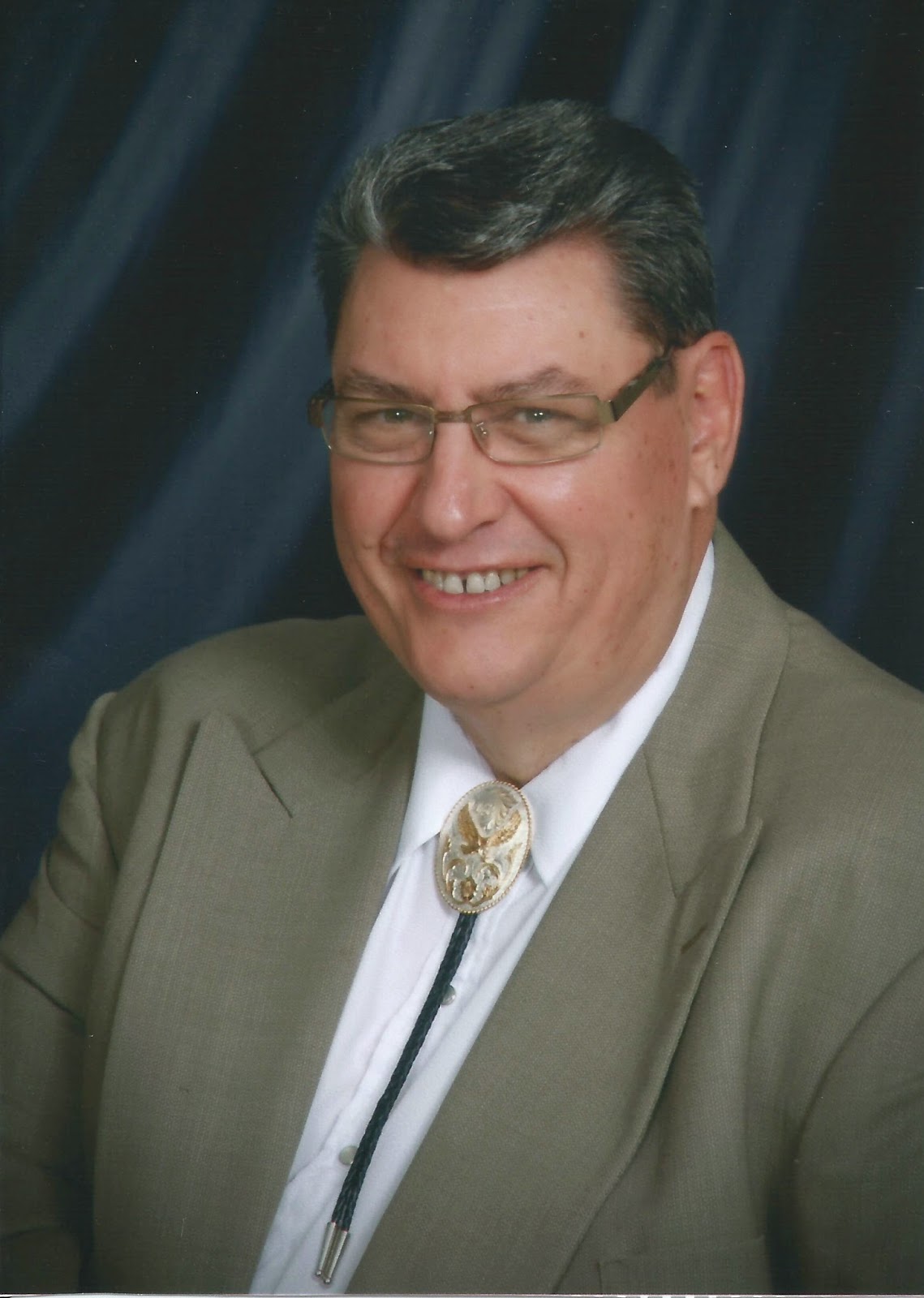 Sept. 9
Psalms 52-54
Psa 52:1 Why do you boast of mischief, mighty man? God's loving kindness endures continually.
Psa 52:2 Your tongue plots destruction, like a sharp razor, working deceitfully.
Psa 52:3 You love evil more than good, lying rather than speaking the truth. Selah.
Psa 52:4 You love all devouring words, you deceitful tongue.
Psa 52:5 God will likewise destroy you forever. He will take you up, and pluck you out of your tent, and root you out of the land of the living. Selah.
Psa 52:6 The righteous also will see it, and fear, and laugh at him, saying,
Psa 52:7 "Behold, this is the man who didn't make God his strength, but trusted in the abundance of his riches, and strengthened himself in his wickedness."
Psa 52:8 But as for me, I am like a green olive tree in God's house. I trust in God's loving kindness forever and ever.
Psa 52:9 I will give you thanks forever, because you have done it. I will hope in your name, for it is good, in the presence of your saints.

Psa 53:1 The fool has said in his heart, "There is no God." They are corrupt, and have done abominable iniquity. There is no one who does good.
Psa 53:2 God looks down from heaven on the children of men, to see if there are any who understood, who seek after God.
Psa 53:3 Every one of them has gone back. They have become filthy together. There is no one who does good, no, not one.
Psa 53:4 Have the workers of iniquity no knowledge, who eat up my people as they eat bread, and don't call on God?
Psa 53:5 There they were in great fear, where no fear was, for God has scattered the bones of him who encamps against you. You have put them to shame, because God has rejected them.
Psa 53:6 Oh that the salvation of Israel would come out of Zion! When God brings back his people from captivity, then Jacob shall rejoice, and Israel shall be glad.
Psa 54:1 Save me, God, by your name. Vindicate me in your might.
Psa 54:2 Hear my prayer, God. Listen to the words of my mouth.
Psa 54:3 For strangers have risen up against me. Violent men have sought after my soul. They haven't set God before them. Selah.
Psa 54:4 Behold, God is my helper. The Lord is the one who sustains my soul.
Psa 54:5 He will repay the evil to my enemies. Destroy them in your truth.
Psa 54:6 With a free will offering, I will sacrifice to you. I will give thanks to your name, Yahweh, for it is good.
Psa 54:7 For he has delivered me out of all trouble. My eye has seen triumph over my enemies.

1Co 5:1 It is actually reported that there is sexual immorality among you, and such sexual immorality as is not even named among the Gentiles, that one has his father's wife.
1Co 5:2 You are puffed up, and didn't rather mourn, that he who had done this deed might be removed from among you.
1Co 5:3 For I most certainly, as being absent in body but present in spirit, have already, as though I were present, judged him who has done this thing.
1Co 5:4 In the name of our Lord Jesus Christ, you being gathered together, and my spirit, with the power of our Lord Jesus Christ,
1Co 5:5 are to deliver such a one to Satan for the destruction of the flesh, that the spirit may be saved in the day of the Lord Jesus.
1Co 5:6 Your boasting is not good. Don't you know that a little yeast leavens the whole lump?
1Co 5:7 Purge out the old yeast, that you may be a new lump, even as you are unleavened. For indeed Christ, our Passover, has been sacrificed in our place.
1Co 5:8 Therefore let us keep the feast, not with old yeast, neither with the yeast of malice and wickedness, but with the unleavened bread of sincerity and truth.
1Co 5:9 I wrote to you in my letter to have no company with sexual sinners;
1Co 5:10 yet not at all meaning with the sexual sinners of this world, or with the covetous and extortioners, or with idolaters; for then you would have to leave the world.
1Co 5:11 But as it is, I wrote to you not to associate with anyone who is called a brother who is a sexual sinner, or covetous, or an idolater, or a slanderer, or a drunkard, or an extortioner. Don't even eat with such a person.
1Co 5:12 For what have I to do with also judging those who are outside? Don't you judge those who are within?
1Co 5:13 But those who are outside, God judges. "Put away the wicked man from among yourselves."
Email ThisBlogThis!Share to TwitterShare to FacebookShare to Pinterest 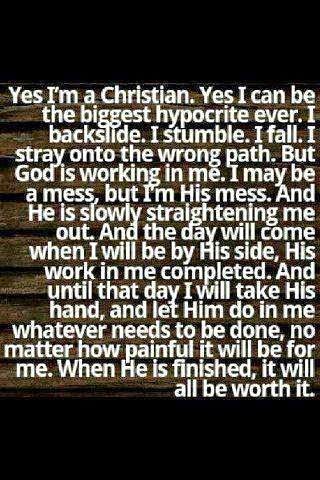 Astrid Olsen put this graphic on facebook today (way to go, Astrid) and it is a good one!!!  And those of us who call ourselves Christians can relate to it.  Face it, we all do things we wish we didn't do and hate ourselves for doing them.  But, God works on us, improving our lives.  Sometimes it is easy to spot the wrong that we do, and at other times it takes a long time to realize how we err. But, Jesus is always there and with his help, we always strive to be the best we can be!!!  The verses above are especially important because if someone has ever called you a hypocrite to your face, they come back to haunt you!!!  Usually, this happens when someone feels threatened about their own sin and as a defensive measure they attack YOU!!!  However, look to the "log" in your own eye (heavy emphasis on LOG [seems to me that this refers to big things, doesn't it?] !!!!) and judge fairly!!!  I think the key to dealing with all this is to know in your heart that you are earnestly, constantly, and perhaps even fervently seeking to know God's will and do it. If the apostle Paul could refer to himself as the foremost of sinners (1 Timothy 1:15) and from reading his letters I think it is safe to say that he was utterly committed to Christ and undoubtedly sincere.  Then, what about the average Christian? Like Ezra of old, dedicate yourself to the following...

Ezra 7:10 NASB
(10)  For Ezra had set his heart to study the law of the LORD and to practice it, and to teach His statutes and ordinances in Israel.

and think about that picture...