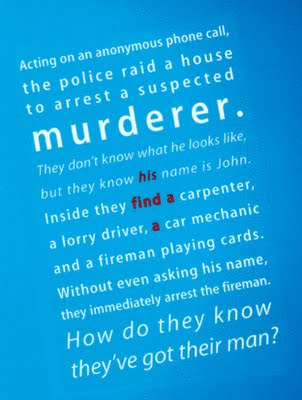 I downloaded this yesterday from a website that listed it and several others under the general title of "thinking outside the box". Give it a few minutes thought and you will probably guess the answer, but if not, don't worry.... I didn't get it. When I did learn the answer, it was a surprise to me, but life is full of surprises. Here is one such tale that involves a surprise.
Matthew 20:1-16 (WEB)
1) “For the Kingdom of Heaven is like a man who was the master of a household, who went out early in the morning to hire laborers for his vineyard.
2) When he had agreed with the laborers for a denarius a day, he sent them into his vineyard.
3) He went out about the third hour, and saw others standing idle in the marketplace.
4) To them he said, ‘You also go into the vineyard, and whatever is right I will give you.’ So they went their way.
5) Again he went out about the sixth and the ninth hour, and did likewise.
6) About the eleventh hour he went out, and found others standing idle. He said to them, ‘Why do you stand here all day idle?’
7) “They said to him, ‘Because no one has hired us.’ “He said to them, ‘You also go into the vineyard, and you will receive whatever is right.’
8) When evening had come, the lord of the vineyard said to his manager, ‘Call the laborers and pay them their wages, beginning from the last to the first.’
9) “When those who were hired at about the eleventh hour came, they each received a denarius.
10) When the first came, they supposed that they would receive more; and they likewise each received a denarius.
11) When they received it, they murmured against the master of the household,
12) saying, ‘These last have spent one hour, and you have made them equal to us, who have borne the burden of the day and the scorching heat!’
13) “But he answered one of them, ‘Friend, I am doing you no wrong. Didn’t you agree with me for a denarius?
14) Take that which is yours, and go your way. It is my desire to give to this last just as much as to you.
15) Isn’t it lawful for me to do what I want to with what I own? Or is your eye evil, because I am good?’
16) So the last will be first, and the first last. For many are called, but few are chosen.”
(Matthew 20:1-16, WEB)

For a Jew, works were everything. It meant fulfilling the Law through obedience, by doing. So when those who worked only a short time received pay, it was the natural thing to assume that those who worked more should obtain more. Wrong!!! This incident was meant to be a lesson in the Grace of God, which had nothing to do with meritorious performance. Surprise, God wants to be merciful, not just to be obeyed. They didn't think outside their little "box" of the LAW, but WE CAN! As far as the puzzling pictures goes.... well, they arrested the fireman, BECAUSE HE WAS THE ONLY "HE" THERE; the rest of the group were women. God works this way as well, so go ahead, try your very best to understand HIM, but remember: Expect the unexpected!!!!
Email ThisBlogThis!Share to TwitterShare to FacebookShare to Pinterest
Newer Posts Older Posts Home
Subscribe to: Posts (Atom)