The rest of the story 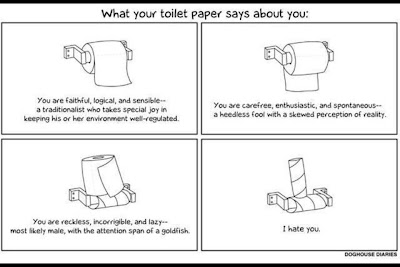 Paralysis in analysis seems to apply.  However, on a second look there seems to be some truth here.  Thoughtfulness, attention to detail and consideration for others as well as their direct opposites could be gleaned from how someone treats such an ordinary act.  The more I think about it, the more I like the analysis.  Its not just what you say in life; its what you do as well.  Which brings me to the book of Acts (the practices of the apostles of Jesus)...
WEB: Acts Chapter 1

[1] The first book I wrote, Theophilus, concerned all that Jesus began both to do and to teach, [2] until the day in which he was received up, after he had given commandment through the Holy Spirit to the apostles whom he had chosen. [3] To these he also showed himself alive after he suffered, by many proofs, appearing to them over a period of forty days, and speaking about God’s Kingdom. [4] Being assembled together with them, he commanded them, "“Don’t depart from Jerusalem, but wait for the promise of the Father, which you heard from me. [5] For John indeed baptized in water, but you will be baptized in the Holy Spirit not many days from now.”"

[6] Therefore, when they had come together, they asked him, “Lord, are you now restoring the kingdom to Israel?”

[7] He said to them, "“It isn’t for you to know times or seasons which the Father has set within his own authority. [8] But you will receive power when the Holy Spirit has come upon you. You will be witnesses to me in Jerusalem, in all Judea and Samaria, and to the uttermost parts of the earth.”"

[9] When he had said these things, as they were looking, he was taken up, and a cloud received him out of their sight.
The "fishermen" of Jesus had been with Jesus for about two plus years.  They had watched him act in all sorts of situations and supposedly learned something.  Now, they were at a crossroads and it was their turn to act.  What they would do would say a great deal about them, just as what WE DO says a lot about US. What we have done in the past says a great deal about who we were, but what we are doing now and what we will do in the future is far more important.  So, take a lesson from the picture above, if you are less than considerate, change.  You may make your spouse happy.  Consider this... if you can change a simple thing like bathroom etiquette, then anything is possible.  Think it really doesn't matter?  These simple fishermen changed the world... and that is the rest of the story (in the book of Acts).
Email ThisBlogThis!Share to TwitterShare to FacebookShare to Pinterest


Rev 15:1 I saw another great and marvelous sign in the sky: seven angels having the seven last plagues, for in them God's wrath is finished.
Rev 15:2 I saw something like a sea of glass mixed with fire, and those who overcame the beast, his image, and the number of his name, standing on the sea of glass, having harps of God.
Rev 15:3 They sang the song of Moses, the servant of God, and the song of the Lamb, saying, "Great and marvelous are your works, Lord God, the Almighty! Righteous and true are your ways, you King of the nations.
Rev 15:4 Who wouldn't fear you, Lord, and glorify your name? For you only are holy. For all the nations will come and worship before you. For your righteous acts have been revealed."
Rev 15:5 After these things I looked, and the temple of the tabernacle of the testimony in heaven was opened.
Rev 15:6 The seven angels who had the seven plagues came out, clothed with pure, bright linen, and wearing golden sashes around their breasts.
Rev 15:7 One of the four living creatures gave to the seven angels seven golden bowls full of the wrath of God, who lives forever and ever.
Rev 15:8 The temple was filled with smoke from the glory of God, and from his power. No one was able to enter into the temple, until the seven plagues of the seven angels would be finished.


Rev 16:1 I heard a loud voice out of the temple, saying to the seven angels, "Go and pour out the seven bowls of the wrath of God on the earth!"
Rev 16:2 The first went, and poured out his bowl into the earth, and it became a harmful and evil sore on the people who had the mark of the beast, and who worshiped his image.
Rev 16:3 The second angel poured out his bowl into the sea, and it became blood as of a dead man. Every living thing in the sea died.
Rev 16:4 The third poured out his bowl into the rivers and springs of water, and they became blood.
Rev 16:5 I heard the angel of the waters saying, "You are righteous, who are and who were, you Holy One, because you have judged these things.
Rev 16:6 For they poured out the blood of the saints and the prophets, and you have given them blood to drink. They deserve this."
Rev 16:7 I heard the altar saying, "Yes, Lord God, the Almighty, true and righteous are your judgments."
Rev 16:8 The fourth poured out his bowl on the sun, and it was given to him to scorch men with fire.
Rev 16:9 People were scorched with great heat, and people blasphemed the name of God who has the power over these plagues. They didn't repent and give him glory.
Rev 16:10 The fifth poured out his bowl on the throne of the beast, and his kingdom was darkened. They gnawed their tongues because of the pain,
Rev 16:11 and they blasphemed the God of heaven because of their pains and their sores. They didn't repent of their works.
Rev 16:12 The sixth poured out his bowl on the great river, the Euphrates. Its water was dried up, that the way might be made ready for the kings that come from the sunrise.
Rev 16:13 I saw coming out of the mouth of the dragon, and out of the mouth of the beast, and out of the mouth of the false prophet, three unclean spirits, something like frogs;
Rev 16:14 for they are spirits of demons, performing signs; which go forth to the kings of the whole inhabited earth, to gather them together for the war of that great day of God, the Almighty.
Rev 16:15 "Behold, I come like a thief. Blessed is he who watches, and keeps his clothes, so that he doesn't walk naked, and they see his shame."
Rev 16:16 He gathered them together into the place which is called in Hebrew, Megiddo.
Rev 16:17 The seventh poured out his bowl into the air. A loud voice came forth out of the temple of heaven, from the throne, saying, "It is done!"
Rev 16:18 There were lightnings, sounds, and thunders; and there was a great earthquake, such as was not since there were men on the earth, so great an earthquake, so mighty.
Rev 16:19 The great city was divided into three parts, and the cities of the nations fell. Babylon the great was remembered in the sight of God, to give to her the cup of the wine of the fierceness of his wrath.
Rev 16:20 Every island fled away, and the mountains were not found.
Rev 16:21 Great hailstones, about the weight of a talent, came down out of the sky on people. People blasphemed God because of the plague of the hail, for this plague is exceedingly severe.
Email ThisBlogThis!Share to TwitterShare to FacebookShare to Pinterest

The "me first" mentality by Mark Copeland