David, Ninja squirrels and us 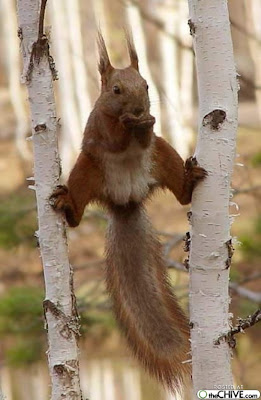 Ninja squirrel; now there's a thought! Able to fly between buildings, to bend trees with his bare feet; he is the master of all he surveys! Who says the lion is the king of the jungle? Move over, Yoshi the master ninja of the North has arrived. Really? Not on your life! But it does make me think about how God views violence. Read on to see more....
Ps 11:1-7 (WEB)
11:1 For the Chief Musician. By David. In Yahweh, I take refuge. How can you say to my soul, “Flee as a bird to your mountain!”
11:2 For, behold, the wicked bend their bows. They set their arrows on the strings, that they may shoot in darkness at the upright in heart.
11:3 If the foundations are destroyed, what can the righteous do?
11:4 Yahweh is in his holy temple. Yahweh is on his throne in heaven. His eyes observe. His eyes examine the children of men.
11:5 Yahweh examines the righteous, but the wicked and him who loves violence his soul hates.
11:6 On the wicked he will rain blazing coals; fire, sulfur, and scorching wind shall be the portion of their cup.
11:7 For Yahweh is righteous. He loves righteousness. The upright shall see his face.

David was chosen by God, but that doesn't mean he had an easy life. From reading the Bible, it seems that he spent much of his time in warfare. During his lifetime he was involved in so much warfare and death that God would not let him build the temple, but left that task to his son Solomon. However, I don't think he really wanted violence because it says in Scripture that David was a man after God's own heart. Also, verse 5 shows us that those who love violence are hated by God. Strong words, simple concept. If you want to be with God, don't do violence. But I can't help but wonder, if David was a man of war and skilled in fighting... did he know Kung fu? And, I know that David had "mighty men" who fought for him, but were there any squirrels?
Email ThisBlogThis!Share to TwitterShare to FacebookShare to Pinterest
Newer Posts Older Posts Home
Subscribe to: Posts (Atom)