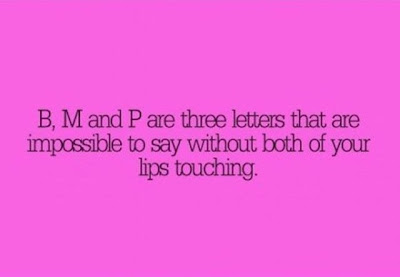 OK, you read the sign and then you undoubtedly tries to say the letters WITHOUT TOUCHING YOUR LIPS TOUCHING, RIGHT???  Don't feel like you are alone, I did it too!!! I guess its just human nature, not to trust things... at least until something is proven to you.  Today, people will lie right to your face and then grimace in disgust at the first sign of your disbelief.  With so many boldfaced lies (and liars) out there, its easy to become a skeptic!!!  But, what do you do when a multitude of genuine witnesses overwhelmingly testify to the same thing and are willing to attest to the fact by sacrificing their very lives?  Here is an example...

Acts, Chapter 1
1 The first book I wrote, Theophilus, concerned all that Jesus began both to do and to teach,  2 until the day in which he was received up, after he had given commandment through the Holy Spirit to the apostles whom he had chosen.  3 To these he also showed himself alive after he suffered, by many proofs, appearing to them over a period of forty days, and speaking about God’s Kingdom.  4 Being assembled together with them, he commanded them, "“Don’t depart from Jerusalem, but wait for the promise of the Father, which you heard from me.  5 For John indeed baptized in water, but you will be baptized in the Holy Spirit not many days from now.”"

6 Therefore, when they had come together, they asked him, “Lord, are you now restoring the kingdom to Israel?”

7 He said to them, "“It isn’t for you to know times or seasons which the Father has set within his own authority.  8 But you will receive power when the Holy Spirit has come upon you. You will be witnesses to me in Jerusalem, in all Judea and Samaria, and to the uttermost parts of the earth.”"

12 Then they returned to Jerusalem from the mountain called Olivet, which is near Jerusalem, a Sabbath day’s journey away.  13 When they had come in, they went up into the upper room, where they were staying; that is Peter, John, James, Andrew, Philip, Thomas, Bartholomew, Matthew, James the son of Alphaeus, Simon the Zealot, and Judas the son of James.  14 All these with one accord continued steadfastly in prayer and supplication, along with the women, and Mary the mother of Jesus, and with his brothers.

The disciples of Jesus were a group of nobodies; they were not rich or well educated and by their actions, not even exceptionally intelligent;one of them even proved to be a traitor.  Yet, they and hundreds of others knew Jesus and could testify to his resurrection from the dead.  For many of them, that testimony would be rewarded by the Roman government with a horrible death.  These things are a matter of well-attested to historical fact!!!  However, some today have the gall to say that Christianity is a lie.  And the sorry state of affairs The United States of America finds itself in is to be ruled by disbelievers.  People who have banned the Bible from schools and are attempting to eradicate any and every trace of religion from our society.  I pray that they fail!!!  Most Americans feel powerless in the face of such opposition, but I do not.  In and of myself, I have no ability to combat such a wicked, corrupt government, BUT God answers prayer and I believe he will replace the ungodly with God-fearing men who will restore America to what it once was... a God-fearing nation.  Most of you only know me through this forum, so, you have no reason to have faith in what I might say.  BUT, the scriptures are TRUTH and in fact ARE TRUE.  GOD will change disbelief into faith by the sheer FACT by that what HE says is trustworthy and can be proven.  While we may always continue to sound out the letters of a sign we do not trust, sooner or later, every human being will come to the realization that God can be trusted and should be obeyed.  Its just a matter of time until these thoughts are echoed from your lips too...

Act 25:1 Festus therefore, having come into the province, after three days went up to Jerusalem from Caesarea.
Act 25:2 Then the high priest and the principal men of the Jews informed him against Paul, and they begged him,
Act 25:3 asking a favor against him, that he would summon him to Jerusalem; plotting to kill him on the way.
Act 25:4 However Festus answered that Paul should be kept in custody at Caesarea, and that he himself was about to depart shortly.
Act 25:5 "Let them therefore," said he, "that are in power among you go down with me, and if there is anything wrong in the man, let them accuse him."
Act 25:6 When he had stayed among them more than ten days, he went down to Caesarea, and on the next day he sat on the judgment seat, and commanded Paul to be brought.
Act 25:7 When he had come, the Jews who had come down from Jerusalem stood around him, bringing against him many and grievous charges which they could not prove,
Act 25:8 while he said in his defense, "Neither against the law of the Jews, nor against the temple, nor against Caesar, have I sinned at all."
Act 25:9 But Festus, desiring to gain favor with the Jews, answered Paul and said, "Are you willing to go up to Jerusalem, and be judged by me there concerning these things?"
Act 25:10 But Paul said, "I am standing before Caesar's judgment seat, where I ought to be tried. I have done no wrong to the Jews, as you also know very well.
Act 25:11 For if I have done wrong, and have committed anything worthy of death, I don't refuse to die; but if none of those things is true that they accuse me of, no one can give me up to them. I appeal to Caesar!"
Act 25:12 Then Festus, when he had conferred with the council, answered, "You have appealed to Caesar. To Caesar you shall go."
Act 25:13 Now when some days had passed, Agrippa the King and Bernice arrived at Caesarea, and greeted Festus.
Act 25:14 As he stayed there many days, Festus laid Paul's case before the king, saying, "There is a certain man left a prisoner by Felix;
Act 25:15 about whom, when I was at Jerusalem, the chief priests and the elders of the Jews informed me, asking for a sentence against him.
Act 25:16 To whom I answered that it is not the custom of the Romans to give up any man to destruction, before the accused has met the accusers face to face, and has had opportunity to make his defense concerning the matter laid against him.
Act 25:17 When therefore they had come together here, I didn't delay, but on the next day sat on the judgment seat, and commanded the man to be brought.
Act 25:18 Concerning whom, when the accusers stood up, they brought no charge of such things as I supposed;
Act 25:19 but had certain questions against him about their own religion, and about one Jesus, who was dead, whom Paul affirmed to be alive.
Act 25:20 Being perplexed how to inquire concerning these things, I asked whether he was willing to go to Jerusalem and there be judged concerning these matters.
Act 25:21 But when Paul had appealed to be kept for the decision of the emperor, I commanded him to be kept until I could send him to Caesar."
Act 25:22 Agrippa said to Festus, "I also would like to hear the man myself." "Tomorrow," he said, "you shall hear him."
Act 25:23 So on the next day, when Agrippa and Bernice had come with great pomp, and they had entered into the place of hearing with the commanding officers and principal men of the city, at the command of Festus, Paul was brought in.
Act 25:24 Festus said, "King Agrippa, and all men who are here present with us, you see this man, about whom all the multitude of the Jews petitioned me, both at Jerusalem and here, crying that he ought not to live any longer.
Act 25:25 But when I found that he had committed nothing worthy of death, and as he himself appealed to the emperor I determined to send him.
Act 25:26 Of whom I have no certain thing to write to my lord. Therefore I have brought him forth before you, and especially before you, King Agrippa, that, after examination, I may have something to write.
Act 25:27 For it seems to me unreasonable, in sending a prisoner, not to also specify the charges against him."

"THE EPISTLE TO THE EPHESIANS" Chapter Four by Mark Copeland