Beyond painting with Light... 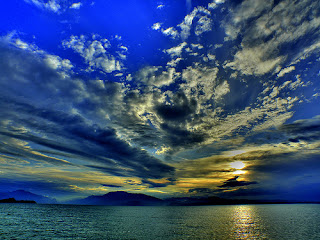 Recently, Thomas Kinkade died.  When I looked at the water in this beautiful picture I thought of him.  This looks like something he would do; something peaceful and pleasant to view.  This self-proclaimed "painter of light" has been someone both Linda and I have admired for many years.  His paintings have brought much pleasure to both ourselves and to millions of others.  The art critics of this world have held him in disdain; as someone who has done nothing to advance the arts, but what do they know???  There is an artist I admire much more than him and this verse speaks of his works....

WEB: Genesis 1:31. God saw everything that he had made, and, behold, it was very good. There was evening and there was morning, a sixth day.

Look again at the picture, everything you see was made by God and it is good!!!!
The Earth and everything in it; all that encompasses what we can conceive of as beautiful... it is ALL GOOD!!!  I will miss not seeing new works from Thomas Kinkade, but the work of the greatest painter of them all remains and becomes new every single day.  Thomas knew this too and earnestly sought God in his private life.  May we all seek out the very best in life and if you take time and really consider what life is all about... YOU WILL SEEK GOD!!!!!

"THE GOSPEL OF MATTHEW" Chapter Two by Mark Copeland