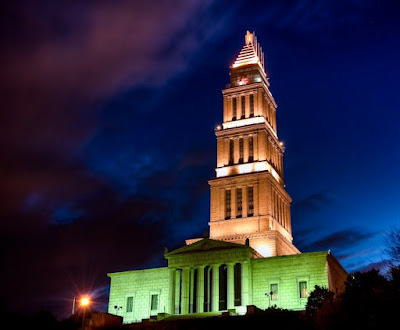 The Washington memorial makes a very nice picture! Yet it is only a building, but the man for whom it was erected is its greatness. George Washington led a rebellion against England that led to the formation of an entirely new nation. Yet, he did it humbly. You might find it odd that I refer to his humbleness, but at one point it was suggested to him that he become king of the new nation. I am very happy to say that he refused and I hope no leader of ours will ever WANT TO BE KING!! But, what if you really were a KING by BIRTHRIGHT? What then?
Mark 15:1-20 WEB (R)
(1) Immediately in the morning the chief priests, with the elders and scribes, and the whole council, held a consultation, and bound Jesus, and carried him away, and delivered him up to Pilate.
(2) Pilate asked him, "Are you the King of the Jews?" He answered, "So you say."
(3) The chief priests accused him of many things.
(4) Pilate again asked him, "Have you no answer? See how many things they testify against you!"
(5) But Jesus made no further answer, so that Pilate marveled.
(6) Now at the feast he used to release to them one prisoner, whom they asked of him.
(7) There was one called Barabbas, bound with those who had made insurrection, men who in the insurrection had committed murder.
(8) The multitude, crying aloud, began to ask him to do as he always did for them.
(9) Pilate answered them, saying, "Do you want me to release to you the King of the Jews?"
(10) For he perceived that for envy the chief priests had delivered him up.
(11) But the chief priests stirred up the multitude, that he should release Barabbas to them instead.
(12) Pilate again asked them, "What then should I do to him whom you call the King of the Jews?"
(13) They cried out again, "Crucify him!"
(14) Pilate said to them, "Why, what evil has he done?" But they cried out exceedingly, "Crucify him!"
(15) Pilate, wishing to please the multitude, released Barabbas to them, and handed over Jesus, when he had flogged him, to be crucified.
(16) The soldiers led him away within the court, which is the Praetorium; and they called together the whole cohort.
(17) They clothed him with purple, and weaving a crown of thorns, they put it on him.
(18) They began to salute him, "Hail, King of the Jews!"
(19) They struck his head with a reed, and spat on him, and bowing their knees, did homage to him.
(20) When they had mocked him, they took the purple off of him, and put his own garments on him. They led him out to crucify him.
Jesus was a king by right of his birth and yet in this passage does not claim the identity; Why? Several reasons. First, his kingdom was not of this world; it was a spiritual kingdom. True, he had power over the elements (changing water to wine, walking on the water, causing the sea to calm, etc.) but his was a spiritual mission; one that sought to win the hearts of men. Second, if he had claimed kingly status in the here and now, Israel would have rebelled and ultimately been destroyed by her Roman masters. Lastly, it was not in his nature to demand obedience; he sought out those who wanted to seek God. Jesus was a different king; a king of the human heart; one who re-united the spiritual realm with that which is Incorporated within human flesh. His monument is not found in any Earthly building, but rather in the hearts of those who love God. Buildings will crumble, monuments may tumble, but true love goes on forever. Nice picture, too bad I don't have a spiritual camera!
Email ThisBlogThis!Share to TwitterShare to FacebookShare to Pinterest
Newer Posts Older Posts Home
Subscribe to: Posts (Atom)