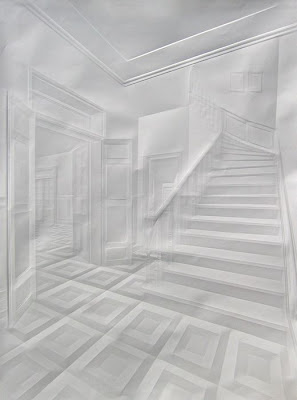 Its not a picture, not a drawing, not a reverse image of a photograph; its folded paper! OK, I have heard of origami, but at the end there are shapes, not a flat result. How? I do not have one clue; no idea, whatsoever! But that it can be done, amazing! I have been doing this "blogging thing" for about a year now and what is surprising is that I am still being surprised!! I am all of 60, so I have seen quite a few things, lived in quite a number of places and I still see something new, almost on a daily basis; life is good!! When Paul penned this passage of Scripture, I think I can safely assume that he surprised quite a few people. Here is his eye opener.
Ephesians 3:1-11 Complete Apostles' Bible
(1) For this reason I, Paul, the prisoner of Christ Jesus in behalf of you Gentiles--
(2) if indeed you have heard of the dispensation of the grace of God which was given to me for you,
(3) how that by revelation He made known to me the mystery, just as I wrote before briefly,
(4) with reference to which, when you read, you can understand my insight in the mystery of Christ,
(5) which in other generations was not made known to the sons of men, as it has now been revealed by the Spirit to His holy apostles and prophets:
(6) that the Gentiles should be joint-heirs, and of the same body, and joint-partakers in His promise in Christ by the gospel,
(7) of which I became a minister according to the free gift of the grace of God which was given to me according to the working of His power.
(8) To me, the very least of all the saints, this grace was given, to preach among the Gentiles the unsearchable riches of Christ,
(9) and to enlighten all as to what is the administration of the mystery, which had been hidden from the ages in God, who created all things through Jesus Christ;
(10) that the manifold wisdom of God might be made known by the church to the rulers and authorities in the heavenlies,
(11) according to the eternal purpose which He made in Christ Jesus our Lord,
Today, when we think of Christianity, it is not Judaism that comes to mind; because its a Gentile world. But, the first century church was predominately Jewish in background and for the most part it was a members-only affair. Then, this message is revealed (here and in the book of Acts) and things changed, really changed. The mystery was revealed, hope was given to all and eternal life the result for those outside Judaism. Those of us whose background does not include a Jewish upbringing, may have some problem appreciating the wonder of this message, but to those from Judaism this would have been almost beyond understanding. How God could do this must have seemed impossible, but every day contains the impossible become reality; if a mere mortal can bend paper to look like a picture and the end result is flat, imagine what the creator of the universe can do! But, don't think about it too long, you will probably just wind up with a headache.
Email ThisBlogThis!Share to TwitterShare to FacebookShare to Pinterest
Newer Posts Older Posts Home
Subscribe to: Posts (Atom)