Through the open window 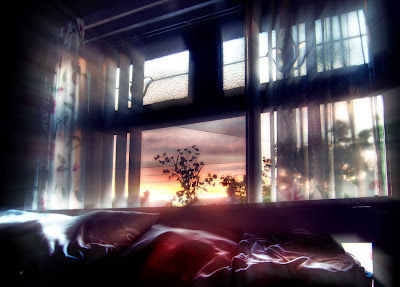 Windows are funny things; they allow you to see the outside yet keep you inside. They reveal the world as it is and yet they somehow change it. Life is a lot like that, it is full of contradictions and things that beg the question "why". Elisha the prophet was about to die and just about the last thing he did involved a window. Read on for more...
2 Kings 13:14-20
14 Now Elisha was fallen sick of his sickness of which he died: and Joash the king of Israel came down to him, and wept over him, and said, My father, my father, the chariots of Israel and the horsemen of it!
15 Elisha said to him, Take bow and arrows; and he took to him bow and arrows.
16 He said to the king of Israel, Put your hand on the bow; and he put his hand on it. Elisha laid his hands on the king's hands.
17 He said, Open the window eastward; and he opened it. Then Elisha said, Shoot; and he shot. He said, Yahweh's arrow of victory, even the arrow of victory over Syria; for you shall strike the Syrians in Aphek, until you have consumed them.
18 He said, Take the arrows; and he took them. He said to the king of Israel, Smite on the ground; and he struck thrice, and stayed.
19 The man of God was angry with him, and said, You should have struck five or six times: then had you struck Syria until you had consumed it, whereas now you shall strike Syria but thrice.
20 Elisha died, and they buried him. WEB
It is a curious thing the way God works through men to accomplish his will. It seems like God always seems to take the long way around in the ways he does things, but ultimately the lessons he teaches are on so many levels as to make you marvel. Why the window, why the arrows, why that number of arrow strikes to the ground? I don't know, but if it was important to have one of the greatest prophets who ever lives do this... so what. One thing is for sure, God was pronouncing judgment and the arrows were a signification of the power of God over the kingdoms of the world. Perhaps the window was a portal to the wonderment of the will and ways of the almighty. Its sort of like looking out your window at a glorious sunrise and marvelling at the beauty of it; you may not understand everything, but the sight of God's workings will inspire you.
Email ThisBlogThis!Share to TwitterShare to FacebookShare to Pinterest
Newer Posts Older Posts Home
Subscribe to: Posts (Atom)