From Gary... Grandkids always welcome; Children by appointment only 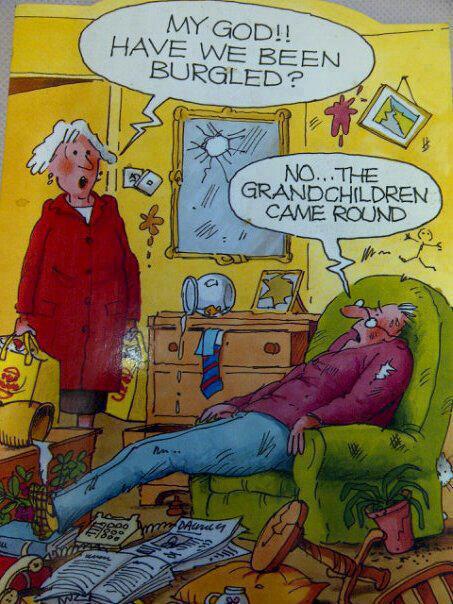 I have been thinking a lot about my daughters and their children today.  It started in the restaurant this morning when I saw a new sign some one had placed on the wall: "Grandchildren always welcome; parents by appointment only".  But when young grandkids come over- WOW! Can they make a mess or what? And talk...
remember this song?


Now, I have a confession to make - they get it from me!!! If I am quiet, I am either sick or upset, so I can't really complain.  On the contrary, I am very happy with my life, as God has forgiven me and I am loved by not only HIM but by a great many others as well.  For God has made me his child and likewise all who obey him.  Check out this passage from Paul's letter to the Romans...

Romans, Chapter 8
1 There is therefore now no condemnation to those who are in Christ Jesus, who don’t walk according to the flesh, but according to the Spirit.  2 For the law of the Spirit of life in Christ Jesus made me free from the law of sin and of death.  3 For what the law couldn’t do, in that it was weak through the flesh, God did, sending his own Son in the likeness of sinful flesh and for sin, he condemned sin in the flesh;  4 that the ordinance of the law might be fulfilled in us, who walk not after the flesh, but after the Spirit.  5 For those who live according to the flesh set their minds on the things of the flesh, but those who live according to the Spirit, the things of the Spirit.  6 For the mind of the flesh is death, but the mind of the Spirit is life and peace; 7 because the mind of the flesh is hostile towards God; for it is not subject to God’s law, neither indeed can it be.  8 Those who are in the flesh can’t please God.  9 But you are not in the flesh but in the Spirit, if it is so that the Spirit of God dwells in you. But if any man doesn’t have the Spirit of Christ, he is not his.  10 If Christ is in you, the body is dead because of sin, but the spirit is alive because of righteousness.  11 But if the Spirit of him who raised up Jesus from the dead dwells in you, he who raised up Christ Jesus from the dead will also give life to your mortal bodies through his Spirit who dwells in you.  12 So then, brothers, we are debtors, not to the flesh, to live after the flesh.  13 For if you live after the flesh, you must die; but if by the Spirit you put to death the deeds of the body, you will live.  14 For as many as are led by the Spirit of God, these are children of God.  15 For you didn’t receive the spirit of bondage again to fear, but you received the Spirit of adoption, by whom we cry, “Abba!Father!”

I was once a child, so I can understand my children and my grandchildren.  Only thing is... my family says I never grew up!!!  Confession time here - they are right!!!  And I have no problem with it, because in my heart I can cry "Abba! Father!"  Can you?
Email ThisBlogThis!Share to TwitterShare to FacebookShare to Pinterest

DORCAS REMEMBERED AT HER DEATH FOR HER GOOD WORKS

MARY (MARTHA'S SISTER) ANOINTS JESUS. SHE IS REMEMBERED FOR IT.
She is be remembered "throughout the whole world...wherever this gospel is preached."

Mk. 14;3-9 What others viewed as a wasteful act, Jesus called a good work.

"She has done what she could" WHAT CAN YOU DO?

Mt. 10:42 "And whoever gives one of these little ones only a cup of cold water
in the name of a disciple, assuredly, I say to you, he shall by no
means lose his reward."

WE ARE IDENTIFIED BY OUR FRUIT (Like a fruit tree is recognized by its kind of fruit.)

WE CONTROL HOW WE WILL BE REMEMBERED:

...IN REARING OUR CHILDREN "IN THE LORD"
HOW WILL THEY REMEMBER US? WHAT EXAMPLE DID WE SET?

Eph. 6:4 "And you, fathers, do not provoke your children to wrath, but bring
them up in the raining and admonition of the Lord."

HOW WILL WE BE REMEMBERED BY OTHERS THROUGH OUR
CHILDREN?

2 Tim. 1:5 "when I call to remembrance the genuine faith that is in you, which
dwelt first in your grandmother Lois and your mother Eunice, and I am
persuaded is in you also."

A GOOD NAME CAN BE CARRIED ON FOR GENERATIONS

Eccl. 7:1 "A good name is better than precious ointment, and the day of death
than the day of one's birth."

Prov. 22:1 "A good name is to be chosen rather than great riches, loving favor
rather than silver and gold."

...BY OUR CO-WORKERS
HOW WILL THEY REMEMBER US? WHAT EXAMPLE DID WE SET?

Eccl. 9:10 "Whatever your hand finds to do, do it with your might; for there is no
work or device or knowledge or wisdom in the grave where you are
going." (NOW IS OUR OPPORTUNITY TO DO GOOD)

...BY OUR NEIGHBORS, FRIENDS, BRETHREN
HOW WILL THEY REMEMBER US? WHAT EXAMPLE DID WE SET?
Will we be remembered like Dorcas?

Gal. 6:9-10 "And let us not grow weary while doing good, for in due season we
shall reap if we do not lose heart. [10] Therefore, as we have
opportunity, let us do good to all, especially to those who are of the
household of faith."

WILL WE BE REMEMBERED IN THE EXAMPLE OF THOSE WHOM
WE INFLUENCED?

2 Cor. 3:1-3 No need for letters of commendation from others.
"You are our epistle written in our hearts, known and read by all
men."

...IN THE JUDGMENT
HOW WILL GOD REMEMBER US?
WILL HE CONFESS US TO THE FATHER, OR DENY KNOWING US?

Rev. 20:11-ff The final judgment scene. Books opened - the record of our
deeds for all to see. WHAT IS WRITTEN IN THAT BOOK?
Email ThisBlogThis!Share to TwitterShare to FacebookShare to Pinterest

Exo 18:1 Now Jethro, the priest of Midian, Moses' father-in-law, heard of all that God had done for Moses, and for Israel his people, how that Yahweh had brought Israel out of Egypt.
Exo 18:2 Jethro, Moses' father-in-law, received Zipporah, Moses' wife, after he had sent her away,
Exo 18:3 and her two sons. The name of one son was Gershom, for Moses said, "I have lived as a foreigner in a foreign land".
Exo 18:4 The name of the other was Eliezer, for he said, "My father's God was my help and delivered me from Pharaoh's sword."
Exo 18:5 Jethro, Moses' father-in-law, came with his sons and his wife to Moses into the wilderness where he was encamped, at the Mountain of God.
Exo 18:6 He said to Moses, I, your father-in-law Jethro, have come to you with your wife, and her two sons with her.
Exo 18:7 Moses went out to meet his father-in-law, and bowed and kissed him. They asked each other of their welfare, and they came into the tent.
Exo 18:8 Moses told his father-in-law all that Yahweh had done to Pharaoh and to the Egyptians for Israel's sake, all the hardships that had come on them on the way, and how Yahweh delivered them.
Exo 18:9 Jethro rejoiced for all the goodness which Yahweh had done to Israel, in that he had delivered them out of the hand of the Egyptians.
Exo 18:10 Jethro said, "Blessed be Yahweh, who has delivered you out of the hand of the Egyptians, and out of the hand of Pharaoh; who has delivered the people from under the hand of the Egyptians.
Exo 18:11 Now I know that Yahweh is greater than all gods because of the thing in which they dealt arrogantly against them."
Exo 18:12 Jethro, Moses' father-in-law, took a burnt offering and sacrifices for God. Aaron came with all of the elders of Israel, to eat bread with Moses' father-in-law before God.
Exo 18:13 It happened on the next day, that Moses sat to judge the people, and the people stood around Moses from the morning to the evening.
Exo 18:14 When Moses' father-in-law saw all that he did to the people, he said, "What is this thing that you do for the people? Why do you sit alone, and all the people stand around you from morning to evening?"
Exo 18:15 Moses said to his father-in-law, "Because the people come to me to inquire of God.
Exo 18:16 When they have a matter, they come to me, and I judge between a man and his neighbor, and I make them know the statutes of God, and his laws."
Exo 18:17 Moses' father-in-law said to him, "The thing that you do is not good.
Exo 18:18 You will surely wear away, both you, and this people that is with you; for the thing is too heavy for you. You are not able to perform it yourself alone.
Exo 18:19 Listen now to my voice. I will give you counsel, and God be with you. You represent the people before God, and bring the causes to God.
Exo 18:20 You shall teach them the statutes and the laws, and shall show them the way in which they must walk, and the work that they must do.
Exo 18:21 Moreover you shall provide out of all the people able men, such as fear God: men of truth, hating unjust gain; and place such over them, to be rulers of thousands, rulers of hundreds, rulers of fifties, and rulers of tens.
Exo 18:22 Let them judge the people at all times. It shall be that every great matter they shall bring to you, but every small matter they shall judge themselves. So shall it be easier for you, and they shall share the load with you.
Exo 18:23 If you will do this thing, and God commands you so, then you will be able to endure, and all of these people also will go to their place in peace."
Exo 18:24 So Moses listened to the voice of his father-in-law, and did all that he had said.
Exo 18:25 Moses chose able men out of all Israel, and made them heads over the people, rulers of thousands, rulers of hundreds, rulers of fifties, and rulers of tens.
Exo 18:26 They judged the people at all times. They brought the hard causes to Moses, but every small matter they judged themselves.
Exo 18:27 Moses let his father-in-law depart, and he went his way into his own land.


However hard it has been, however painful, however many losses you have sustained, however many times your sins have cut you and bruised to till you cried out in your pain, "I am leaving, I am leaving" and yet here you are. Reading such things and vowing to get back up.
Remember the losses every now and then but never forget that here you are!