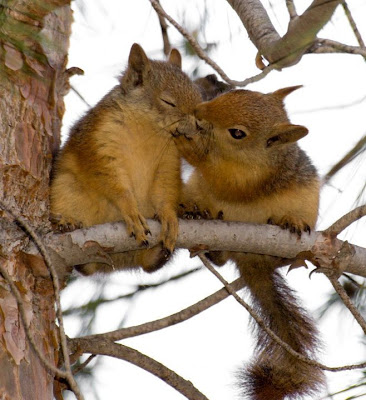 Recently, my wife and I were on a train for a long time.  At times it was very boring, with nothing much to do but look out the window, read, talk or just watch the people around us.  Directly in front of us was a couple who never stopped kissing and at times, necking!  Hour after hour they continued to embrace and this led me to this of the following passage from the book of Ecclesiastes...

Ecclesiastes, Chapter 9
9 Live joyfully with the wife whom you love all the days of your life of vanity, which he has given you under the sun, all your days of vanity: for that is your portion in life, and in your labor in which you labor under the sun.

Loving someone means more than just kissing; it is trying to bring them happiness in any way possible.  This can range from taking out the garbage, to being patient during a sickness, or overlooking a character flaw and probably a thousand other things.  When I can, I like to bring good natured humor into our relationship as well as multiple kisses and saying "I love you" (ILY) daily.  Every relationship has its problems, but I find a kiss every so often does wonders!!!  Try following the squirrels example... couldn't hurt.  If you don't care much for kissing; you might try memorizing jokes or practice making funny faces. Whatever works... really!!!

Psa 83:1 God, don't keep silent. Don't keep silent, and don't be still, God.
Psa 83:2 For, behold, your enemies are stirred up. Those who hate you have lifted up their heads.
Psa 83:3 They conspire with cunning against your people. They plot against your cherished ones.
Psa 83:4 "Come," they say, "and let's destroy them as a nation, that the name of Israel may be remembered no more."
Psa 83:5 For they have conspired together with one mind. They form an alliance against you.
Psa 83:6 The tents of Edom and the Ishmaelites; Moab, and the Hagrites;
Psa 83:7 Gebal, Ammon, and Amalek; Philistia with the inhabitants of Tyre;
Psa 83:8 Assyria also is joined with them. They have helped the children of Lot. Selah.
Psa 83:9 Do to them as you did to Midian, as to Sisera, as to Jabin, at the river Kishon;
Psa 83:10 who perished at Endor, who became as dung for the earth.
Psa 83:11 Make their nobles like Oreb and Zeeb; yes, all their princes like Zebah and Zalmunna;
Psa 83:12 who said, "Let us take possession of God's pasturelands."
Psa 83:13 My God, make them like tumbleweed; like chaff before the wind.
Psa 83:14 As the fire that burns the forest, as the flame that sets the mountains on fire,
Psa 83:15 so pursue them with your tempest, and terrify them with your storm.
Psa 83:16 Fill their faces with confusion, that they may seek your name, Yahweh.
Psa 83:17 Let them be disappointed and dismayed forever. Yes, let them be confounded and perish;
Psa 83:18 that they may know that you alone, whose name is Yahweh, are the Most High over all the earth.

Psa 84:1 How lovely are your dwellings, Yahweh of Armies!
Psa 84:2 My soul longs, and even faints for the courts of Yahweh. My heart and my flesh cry out for the living God.
Psa 84:3 Yes, the sparrow has found a home, and the swallow a nest for herself, where she may have her young, near your altars, Yahweh of Armies, my King, and my God.
Psa 84:4 Blessed are those who dwell in your house. They are always praising you. Selah.
Psa 84:5 Blessed are those whose strength is in you; who have set their hearts on a pilgrimage.
Psa 84:6 Passing through the valley of Weeping, they make it a place of springs. Yes, the autumn rain covers it with blessings.
Psa 84:7 They go from strength to strength. Everyone of them appears before God in Zion.
Psa 84:8 Yahweh, God of Armies, hear my prayer. Listen, God of Jacob. Selah.
Psa 84:9 Behold, God our shield, look at the face of your anointed.
Psa 84:10 For a day in your courts is better than a thousand. I would rather be a doorkeeper in the house of my God, than to dwell in the tents of wickedness.
Psa 84:11 For Yahweh God is a sun and a shield. Yahweh will give grace and glory. He withholds no good thing from those who walk blamelessly.
Psa 84:12 Yahweh of Armies, blessed is the man who trusts in you.

Psa 85:1 Yahweh, you have been favorable to your land. You have restored the fortunes of Jacob.
Psa 85:2 You have forgiven the iniquity of your people. You have covered all their sin. Selah.
Psa 85:3 You have taken away all your wrath. You have turned from the fierceness of your anger.
Psa 85:4 Turn us, God of our salvation, and cause your indignation toward us to cease.
Psa 85:5 Will you be angry with us forever? Will you draw out your anger to all generations?
Psa 85:6 Won't you revive us again, that your people may rejoice in you?
Psa 85:7 Show us your loving kindness, Yahweh. Grant us your salvation.
Psa 85:8 I will hear what God, Yahweh, will speak, for he will speak peace to his people, his saints; but let them not turn again to folly.
Psa 85:9 Surely his salvation is near those who fear him, that glory may dwell in our land.
Psa 85:10 Mercy and truth meet together. Righteousness and peace have kissed each other.
Psa 85:11 Truth springs out of the earth. Righteousness has looked down from heaven.
Psa 85:12 Yes, Yahweh will give that which is good. Our land will yield its increase.
Psa 85:13 Righteousness goes before him, And prepares the way for his steps.
Email ThisBlogThis!Share to TwitterShare to FacebookShare to Pinterest

"THE EPISTLE TO TITUS" Chapter One