An angel or a devil? 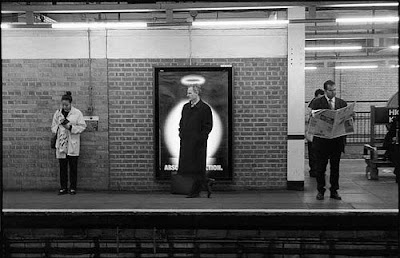 What does an angel look like? I don't know; never have seen one! This man seems like one at first, but take a closer look; he just doesn't seem to foot the bill somehow. Maybe its the look on his face or his stance, but something says a BIG NO! We assume we know a lot of things in this world, but what do we really know? I could be very, very wrong and he could be Michael the archangel, but I assume he isn't, based on my ssumptions and guesses. That is just what the Sadducees did; they had their minds made up about things beyond their comprehension. How Jesus put them straight is seen in the following passage from the book of Matthew:
Mat 22:23 The same day Sadducees came to him, who say that there is no resurrection, and they asked him a question,
Mat 22:24 saying, "Teacher, Moses said, 'If a man dies having no children, his brother must marry the widow and raise up children for his brother.'
Mat 22:25 Now there were seven brothers among us. The first married and died, and having no children left his wife to his brother.
Mat 22:26 So too the second and third, down to the seventh.
Mat 22:27 After them all, the woman died.
Mat 22:28 In the resurrection, therefore, of the seven, whose wife will she be? For they all had her."
Mat 22:29 But Jesus answered them, "You are wrong, because you know neither the Scriptures nor the power of God.
Mat 22:30 For in the resurrection they neither marry nor are given in marriage, but are like angels in heaven.
Mat 22:31 And as for the resurrection of the dead, have you not read what was said to you by God:
Mat 22:32 'I am the God of Abraham, and the God of Isaac, and the God of Jacob'? He is not God of the dead, but of the living."
Mat 22:33 And when the crowd heard it, they were astonished at his teaching.
English Standard Version
They didn't know the Scriptures, heavenly matters or even GOD for that matter! The opinions of the Sadducees were based on their "religious" knowledge and Jesus put that to shame quickly indeed. It would have been better if they had simply asked Jesus about the resurrection or marriage, but no, they had to show their superiority. Sounds like a situation of the first being last and the last being first; but that is obvious, isn't it? Maybe I should take a dose of my own medicine and ask "Who do you think this is; an angel or a devil"? I can't wait to hear from you, but wait, is it me, or does he look a little bit like John Mackenroe? Well, I had better stop with all my opinions, because I think I am seeing quicksand up ahead and I might need a miracle to get pulled out. There never is an angel around when you really need one, is there?
Email ThisBlogThis!Share to TwitterShare to FacebookShare to Pinterest

Any way you compute it 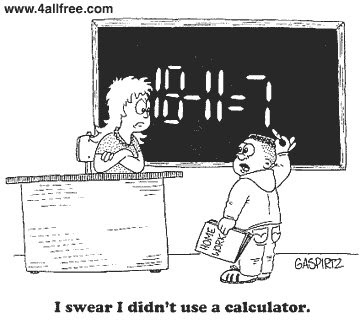 Right!? Does the phrase "figures don't lie, but liars figure" ring a bell? When found out, some people will continue to lie, no matter what! Call it "creative reality" or "a different perspective" or anything else you want, a lie is still a lie, period. The consequences of which can be just embarrassment or something in the extreme. Read the following passage from the book of Acts and see how dangerous lying to God can be:
Act 5:1 But a man named Ananias, with his wife Sapphira, sold a piece of property,
Act 5:2 and with his wife's knowledge he kept back for himself some of the proceeds and brought only a part of it and laid it at the apostles' feet.
Act 5:3 But Peter said, "Ananias, why has Satan filled your heart to lie to the Holy Spirit and to keep back for yourself part of the proceeds of the land?
Act 5:4 While it remained unsold, did it not remain your own? And after it was sold, was it not at your disposal? Why is it that you have contrived this deed in your heart? You have not lied to men but to God."
Act 5:5 When Ananias heard these words, he fell down and breathed his last. And great fear came upon all who heard of it.
Act 5:6 The young men rose and wrapped him up and carried him out and buried him.
Act 5:7 After an interval of about three hours his wife came in, not knowing what had happened.
Act 5:8 And Peter said to her, "Tell me whether you sold the land for so much." And she said, "Yes, for so much."
Act 5:9 But Peter said to her, "How is it that you have agreed together to test the Spirit of the Lord? Behold, the feet of those who have buried your husband are at the door, and they will carry you out."
Act 5:10 Immediately she fell down at his feet and breathed her last. When the young men came in they found her dead, and they carried her out and buried her beside her husband.
Act 5:11 And great fear came upon the whole church and upon all who heard of these things.
ESV
How much more serious punishment could there be? In fact, there is no such thing as a harmless lie, especially if God is involved. A half truth is still a whole lie any way you compute it. Think about that the next time you step up to a chalkboard.
Email ThisBlogThis!Share to TwitterShare to FacebookShare to Pinterest
Newer Posts Older Posts Home
Subscribe to: Posts (Atom)