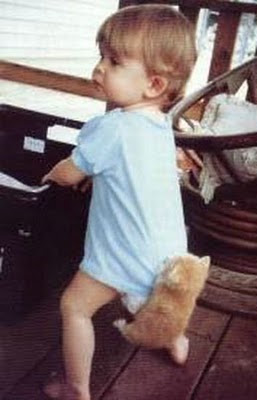 Its funny how animals are a bit like people; in some households, the dog of the house thinks its the master of the house, in others different things happen. In this case I think the cat is very attached to this small boy and will not give up for anything. Reminds me of this passage from the book of John.
Joh 6:47-69 ESV
(47) Truly, truly, I say to you, whoever believes has eternal life.
(48) I am the bread of life.
(49) Your fathers ate the manna in the wilderness, and they died.
(50) This is the bread that comes down from heaven, so that one may eat of it and not die.
(51) I am the living bread that came down from heaven. If anyone eats of this bread, he will live forever. And the bread that I will give for the life of the world is my flesh."
(52) The Jews then disputed among themselves, saying, "How can this man give us his flesh to eat?"
(53) So Jesus said to them, "Truly, truly, I say to you, unless you eat the flesh of the Son of Man and drink his blood, you have no life in you.
(54) Whoever feeds on my flesh and drinks my blood has eternal life, and I will raise him up on the last day.
(55) For my flesh is true food, and my blood is true drink.
(56) Whoever feeds on my flesh and drinks my blood abides in me, and I in him.
(57) As the living Father sent me, and I live because of the Father, so whoever feeds on me, he also will live because of me.
(58) This is the bread that came down from heaven, not like the bread the fathers ate and died. Whoever feeds on this bread will live forever."
(59) Jesus said these things in the synagogue, as he taught at Capernaum.
(60) When many of his disciples heard it, they said, "This is a hard saying; who can listen to it?"
(61) But Jesus, knowing in himself that his disciples were grumbling about this, said to them, "Do you take offense at this?
(62) Then what if you were to see the Son of Man ascending to where he was before?
(63) It is the Spirit who gives life; the flesh is no help at all. The words that I have spoken to you are spirit and life.
(64) But there are some of you who do not believe." (For Jesus knew from the beginning who those were who did not believe, and who it was who would betray him.)
(65) And he said, "This is why I told you that no one can come to me unless it is granted him by the Father."
(66) After this many of his disciples turned back and no longer walked with him.
(67) So Jesus said to the Twelve, "Do you want to go away as well?"
(68) Simon Peter answered him, "Lord, to whom shall we go? You have the words of eternal life,
(69) and we have believed, and have come to know, that you are the Holy One of God."

Is there a point when friendship ends, or in other words, is there a limit to how far a friend will go? Some people will balk when things get a little tough, BUT OTHERS.... Like the cat in the picture, they just keep hanging on. True faith is like that; it just doesn't quit, no matter what. The twelve understood it (except Judas, of course), but I wonder if we do? No matter what means just that, no options, no holds barred, WHATEVER HAPPENS; PERIOD. Its not always easy to follow God, but don't quit. One more thing.... I hope that young fellow in the picture has a clean diaper; it would make life a whole lot easier!
Email ThisBlogThis!Share to TwitterShare to FacebookShare to Pinterest
Newer Posts Older Posts Home
Subscribe to: Posts (Atom)