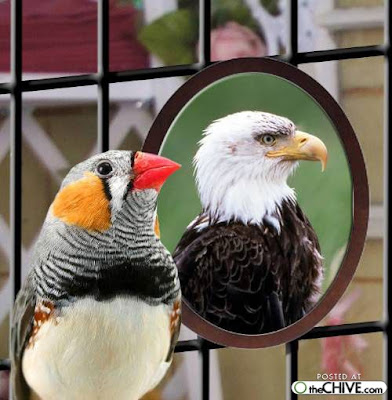 "Eat your spinach and you will grow up big and strong" is something that means a great deal to me. I didn't like the green stuff for a long time, until I was made to eat it and only it for a solid week. Then and only then did I really learn to like it. I began to appreciate it for what it was and not just how it tasted. You know, after awhile, it even began to taste good. The little bird in the picture may think he (or she?) is an Eagle, but sooner or later it will hopefully come to its senses. At the time of the writing of the New Testament, Rome was the unquestioned ruler of the then known world, so those who lived there were at the very heart of western civilization! Rome was the center of the world, so why not see Eagles where little birdies lived? The answer is found in Romans chapter twelve.


Romans 12:1-16 WEB (R)
(1) Therefore I urge you, brothers, by the mercies of God, to present your bodies a living sacrifice, holy, acceptable to God, which is your spiritual service.
(2) Don't be conformed to this world, but be transformed by the renewing of your mind, so that you may prove what is the good, well-pleasing, and perfect will of God.
(3) For I say, through the grace that was given me, to every man who is among you, not to think of himself more highly than he ought to think; but to think reasonably, as God has apportioned to each person a measure of faith.
(4) For even as we have many members in one body, and all the members don't have the same function,
(5) so we, who are many, are one body in Christ, and individually members one of another.
(6) Having gifts differing according to the grace that was given to us, if prophecy, let us prophesy according to the proportion of our faith;
(7) or service, let us give ourselves to service; or he who teaches, to his teaching;
(8) or he who exhorts, to his exhorting: he who gives, let him do it with liberality; he who rules, with diligence; he who shows mercy, with cheerfulness.
(9) Let love be without hypocrisy. Abhor that which is evil. Cling to that which is good.
(10) In love of the brothers be tenderly affectionate one to another; in honor preferring one another;
(11) not lagging in diligence; fervent in spirit; serving the Lord;
(12) rejoicing in hope; enduring in troubles; continuing steadfastly in prayer;
(13) contributing to the needs of the saints; given to hospitality.
(14) Bless those who persecute you; bless, and don't curse.
(15) Rejoice with those who rejoice. Weep with those who weep.
(16) Be of the same mind one toward another. Don't set your mind on high things, but associate with the humble. Don't be wise in your own conceits.

In Christ all followers are equal; but not all have the same function. Some of us may think we are more or less important than we really are, but God knows best how to use each one of us. I remember a maintenance man named Ron Q.; he was outstanding at what he did and a pleasant sort of fellow, so I struck up a conversation with him and we set up a Bible study. Since it was obvious he was definitely NOT a book person, I bought a copy of an "Easy to Read" New Testament for him to use. This was a big mistake because he was insulted. I should have asked what he wanted to use. He saw himself as being a more accomplished reader than he actually was, but I was more deceived than him because I didn't consider his feelings. I should have been looking for an Eagle, when all I saw was a little bird. That mistake cost both of us a lot and was one of the hardest lessons for me to learn. Pride is a terrible sin! Nowadays,when I look in the mirror, I don't see an Eagle, just one very big bird!
Email ThisBlogThis!Share to TwitterShare to FacebookShare to Pinterest

A reflection of love 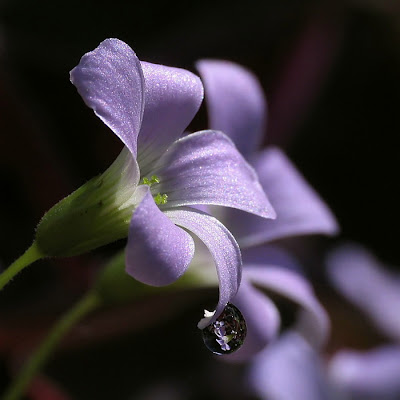 When I first saw this picture of the flower I appreciated it for its beauty and then I looked a bit closer. Notice the drop of water; in it is a reflection of the flower. Like a flower within a flower it seems to shout of beauty in a way I had never really thought of before. Without a doubt, God does beautiful work.

Consider this passage from the New Testament.

Matthew 6:24-34 WEB (R)
(24) "No one can serve two masters, for either he will hate the one and love the other; or else he will be devoted to one and despise the other. You can't serve both God and Mammon.
(25) Therefore, I tell you, don't be anxious for your life: what you will eat, or what you will drink; nor yet for your body, what you will wear. Isn't life more than food, and the body more than clothing?
(26) See the birds of the sky, that they don't sow, neither do they reap, nor gather into barns. Your heavenly Father feeds them. Aren't you of much more value than they?
(27) "Which of you, by being anxious, can add one moment to his lifespan?
(28) Why are you anxious about clothing? Consider the lilies of the field, how they grow. They don't toil, neither do they spin,
(29) yet I tell you that even Solomon in all his glory was not dressed like one of these.
(30) But if God so clothes the grass of the field, which today exists, and tomorrow is thrown into the oven, won't he much more clothe you, you of little faith?
(31) "Therefore don't be anxious, saying, 'What will we eat?', 'What will we drink?' or, 'With what will we be clothed?'
(32) For the Gentiles seek after all these things, for your heavenly Father knows that you need all these things.
(33) But seek first God's Kingdom, and his righteousness; and all these things will be given to you as well.
(34) Therefore don't be anxious for tomorrow, for tomorrow will be anxious for itself. Each day's own evil is sufficient.

God cares for even the humble flowers of the field and the depth of that love is revealed as being nothing in comparison to that of HIS love for us. If he takes such care to produce magnificence on such a scale that even its mere reflection is a work of art, then what joys await those who have faith and trust in him?
Email ThisBlogThis!Share to TwitterShare to FacebookShare to Pinterest
Newer Posts Older Posts Home
Subscribe to: Posts (Atom)