Headed in the right direction 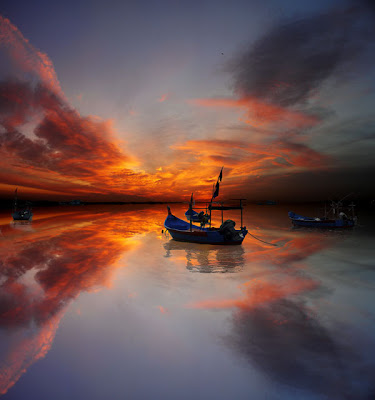 When I saw this picture, I was instantly attracted to it; I didn't know why at the time, but somehow I was just drawn to it. When I saw it again today, I suddenly knew why; it was as if I were on that boat and was sailing into the very center of that sunset; into the bulls eye if you will. To me there is something very appealing about being on course, going in the right direction, and knowing exactly what is going to happen next. That is one of the things I really like about Jesus; he didn't waver or equivocate; he goes right to the heart of the matter. Even when those around him try to throw him off by trickery, he is unmoved.


Matthew 22:15-22 WEB (R)
(15) Then the Pharisees went and took counsel how they might entrap him in his talk.
(16) They sent their disciples to him, along with the Herodians, saying, "Teacher, we know that you are honest, and teach the way of God in truth, no matter who you teach, for you aren't partial to anyone.
(17) Tell us therefore, what do you think? Is it lawful to pay taxes to Caesar, or not?"
(18) But Jesus perceived their wickedness, and said, "Why do you test me, you hypocrites?
(19) Show me the tax money." They brought to him a denarius.
(20) He asked them, "Whose is this image and inscription?"
(21) They said to him, "Caesar's." Then he said to them, "Give therefore to Caesar the things that are Caesar's, and to God the things that are God's."
(22) When they heard it, they marveled, and left him, and went away.


I am unsure how I would respond to this "innocent" little question. Normally, I don't call people hypocrite unless I am prepared for a brawl. Jesus however, did and with good reason; they were. What he told them to do was the RIGHT thing to do and so they couldn't argue. Unlike them, Jesus was straightforward about what he said and what he meant. Is it any wonder people followed him so readily? Honesty and straightforwardness is a rare thing indeed and I don't know about you, but I find it refreshing and I want to hear more; how about you?
Email ThisBlogThis!Share to TwitterShare to FacebookShare to Pinterest
Newer Posts Older Posts Home
Subscribe to: Posts (Atom)