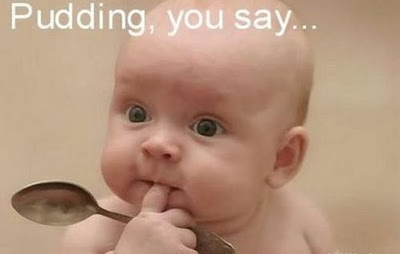 I wonder what babies think about. They respond to many things almost from birth; but what kind of thoughts do they have? My best guess are things like food and touch, but who knows? This picture has the baby considering whether or not he (or is it a she?) should have some pudding. One thing is certain, as this one grows older he will want things, but what things? Here is where the Bible comes in. Read these few verses to get an insight.
1 John 2:15-17 (WEB)
15) Don’t love the world, neither the things that are in the world. If anyone loves the world, the Father’s love isn’t in him.
16) For all that is in the world, the lust of the flesh, the lust of the eyes, and the pride of life, isn’t the Father’s, but is the world’s.
17) The world is passing away with its lusts, but he who does God’s will remains forever.
(1 John 2:15-17, WEB)

Progressing from a focus on the material to the spiritual is a sign of true growth. We know that world around us is decaying (and so are we) and when we look beyond all that we show the essence of true intelligence. Is it wrong to want things? NO But its better to think about what we want in the light of God's will. So, having said all that, this picture gets even better. As far as I am concerned.... pudding sounds really good (almost anytime)!!! I wonder if there is any Tapioca in the fridge?
Email ThisBlogThis!Share to TwitterShare to FacebookShare to Pinterest
Newer Posts Older Posts Home
Subscribe to: Posts (Atom)