The date on a calendar 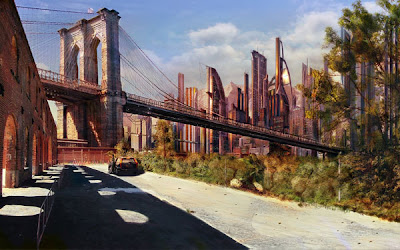 OK, I recognize the Brooklyn bridge, but what is that behind it? Some one's impression of the future, I think? But what will the future really be like and will cities really look like this? If you are looking for answers from me, you won't get any. Does the future really matter or is there even likely to be one, given the fact that there are so many countries with nuclear weapons? Frankly, given all the hate out there, it would seem unlikely that 200 years from now there will even be cities, let alone futuristic edifices like in the picture. What does the Bible say about the future, well, lets just glance at one vision, given in the far away past.
Daniel 12:1-13 Complete Apostles' Bible
(1) And at that time Michael the great prince shall stand up, that stands over the children of your people, and there shall be a time of tribulation, such tribulation as has not been from the time that there was a nation on the earth until that time. At that time your people shall be delivered, everyone that is written in the book.
(2) And many of them that sleep in the dust of the earth shall awake, some to everlasting life, and some to reproach and everlasting shame.
(3) And the wise shall shine as the brightness of the firmament, and some of the many righteous as the stars forever and ever.
(4) And you, Daniel, close the words, and seal the book to the time of the end; until many are taught, and knowledge is increased.
(5) And I Daniel, saw, and behold, two others stood, on one side of the bank of the river, and the other on the other side of the bank of the river.
(6) And one said to the man clothed in linen, who was over the water of the river, When will be the end of the wonders which you have mentioned?
(7) And I heard the man clothed in linen, who was over the water of the river, and he lifted up his right hand and his left hand to heaven, and swore by Him that lives forever, that it should be for a time, times and half a time. When the dispersion is ended, they shall know all these things.
(8) And I heard, but I understood not. And I said, O Lord, what will be the end of these things?
(9) And he said, Go, Daniel; for the words are closed and sealed up to the time of the end.
(10) Many must be tested, and thoroughly whitened, and tried with fire, and sanctified; but the transgressors shall transgress: and none of the transgressors shall understand, but the wise shall understand.
(11) And from the time of the removal of the perpetual sacrifice, when the abomination of desolation shall be set up, there shall be a thousand two hundred and ninety days.
(12) Blessed is he that waits, and comes to the thousand three hundred and thirty-five days.
(13) But you, go your way, and rest; for there are yet days and seasons to the fulfillment of the end; and you shall stand in your inheritance at the end of the days.


How many people have argued over this and other "end time" passages? Countless, to be sure. Preachers have scared untold millions with predictions of what will happen and when. But, I keep remembering that Jesus said something like "an evil and adulterous generation" will look for signs. What about this passage, is it fulfilled? In my thinking, it is. Yet, I also think we are in the final generation before the return of Christ. Whether I am right or wrong really doesn't matter because God will work everything out in HIS own good time. What is important is my relationship with the creator on a daily basis and where my heart is! But are we in the "end of days"? The answer is an unequivocal, YES! How can I say that, well, we only have so many days on this Earth and then our end (and a new beginning) will come. Live each day like it is the future and rejoice in what the God of heaven has done and will do; the rest is just the date on a calendar. 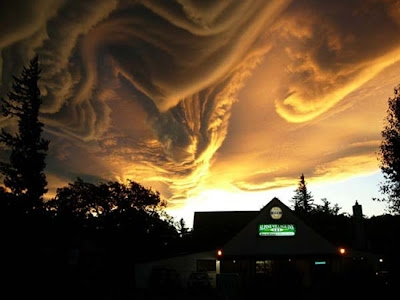 Behold; a new cloud was identified in 2009. Called the "Asperatus", it is associated with storm systems. Is this new? Maybe and maybe not. I have to ask the question: New back to what date? In other words, when did records begin to be kept; 100 years or more, or perhaps 200? So, in light of this, designating this as "new" borders on the arrogant. In the physical realm, is there anything new? I like what Solomon has to say on the subject.


Ecclesiastes 1:1-10 Complete Apostles' Bible
(1) The words of the Preacher, the son of David, king of Israel in Jerusalem.
(2) Vanity of vanities, said the Preacher, vanity of vanities; all is vanity.
(3) What advantage is there to a man in all his labor that he takes under the sun?
(4) A generation goes, and a generation comes; but the earth abides forever.
(5) And the sun arises, and the sun goes down and draws toward its place;
(6) arising there it proceeds southward, and goes round toward the north. The wind goes round and round, and the wind returns to its circuits.
(7) All the rivers run into the sea; and yet the sea is not filled. To the place from which the rivers come, there they return again.
(8) All things are full of labor; a man will not be able to speak of them. Neither shall the eye be satisfied with seeing, neither shall the ear be filled with hearing.
(9) What is that which has been? The very thing which shall be. And what is that which has been done? The very thing which shall be done; and there is nothing new under the sun.
(10) Who is he that shall speak and say, Behold, this is new? It has already been in the ages that have passed before us.

Exactly, what does he mean? In this world there is nothing new, period. All of cosmology and meteorology and human existence has not changed. True, we have better ways of doing things, but we still interact with one another, we still work (often, way too hard), eat, sleep, procreate and die. Man's generic existence has not changed one bit; we are still mortal and God immortal. Having said all that.... this cloud is new to me and perhaps that is what should have been said in the first place. And, oh yes, I think this is ONE BEAUTIFUL CLOUD FORMATION. The God of heaven does do nice work, doesn't HE? I wonder what "new to me" thing I will see tomorrow?
Email ThisBlogThis!Share to TwitterShare to FacebookShare to Pinterest
Newer Posts Older Posts Home
Subscribe to: Posts (Atom)