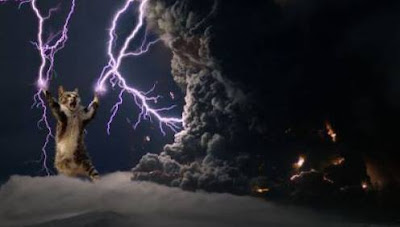 For Maxi...
I had just finished a delicious meal; given to me by the one I allow to take care of me. It was a purrfect feast and it made me sleepy. I found a nice place to curl up and totally relax. Soon I was fast asleep and as I slept I dreamed of many things; my favorite treats, toys that I love to play with and many other things too numerous to mention. There must have been something special in that meal I was given, for suddenly I felt a growing power within me. I felt stronger with each passing moment and soon I WAS IN TOTAL CONTROL OF EVERYTHING AND EVERYBODY AROUND ME. I could feel the power emanate from my extremities; POWER, TOTAL POWER WAS MINE! But it wasn't enough, and as time went on I just wanted more and more and more. There was no to end to it; The world was mine...... Then I awoke, back to the real world, where I only had a little power over the one I allow to take care of me. Sound a little familiar? I hope not!!! If you are having dreams like this, maybe some counseling or medical help is in order. However, it could be something as simple as: not having chili after 2 am or cutting back on the catnip. But power is something we all have to think about at one time or another, as it is a part of life. Here is the story of one man who had a problem with the pride of power and its found in the book of Acts.
Acts 8:9-24 (WEB)
9) But there was a certain man, Simon by name, who used to practice sorcery in the city, and amazed the people of Samaria, making himself out to be some great one,
10) to whom they all listened, from the least to the greatest, saying, “This man is that great power of God.”
11) They listened to him, because for a long time he had amazed them with his sorceries.
12) But when they believed Philip preaching good news concerning the Kingdom of God and the name of Jesus Christ, they were baptized, both men and women.
13) Simon himself also believed. Being baptized, he continued with Philip. Seeing signs and great miracles occurring, he was amazed.
14) Now when the apostles who were at Jerusalem heard that Samaria had received the word of God, they sent Peter and John to them,
15) who, when they had come down, prayed for them, that they might receive the Holy Spirit;
16) for as yet he had fallen on none of them. They had only been baptized in the name of Christ Jesus.
17) Then they laid their hands on them, and they received the Holy Spirit.
18) Now when Simon saw that the Holy Spirit was given through the laying on of the apostles’ hands, he offered them money,
19) saying, “Give me also this power, that whomever I lay my hands on may receive the Holy Spirit.”
20) But Peter said to him, “May your silver perish with you, because you thought you could obtain the gift of God with money!
21) You have neither part nor lot in this matter, for your heart isn’t right before God.
22) Repent therefore of this, your wickedness, and ask God if perhaps the thought of your heart may be forgiven you.
23) For I see that you are in the gall of bitterness and in the bondage of iniquity.”
24) Simon answered, “Pray for me to the Lord, that none of the things which you have spoken happen to me.”
(Acts 8:9-24, WEB)

Whether human or feline, its in the blood to want power. Simon thought he could buy that power and become like a god; boy was he wrong. Face it, we can't control everything; we just have to learn to be submissive in some parts of our life. But, when it comes to the things of God, be careful, God really does have all the power and HE PLAYS FOR KEEPS. You may be someone very smart, or strong, or clever, or determined (stubborn) but whatever it may be, God has more of it. Dream all you like, but in the end, God has the real power! Once you get that little concept, it will be like someone hit you with a lightning bolt!!! WHAMO!! One more thing... tonight before you go to sleep... DO NOT EAT ANYTHING SPICY!!!!
Email ThisBlogThis!Share to TwitterShare to FacebookShare to Pinterest
Newer Posts Older Posts Home
Subscribe to: Posts (Atom)