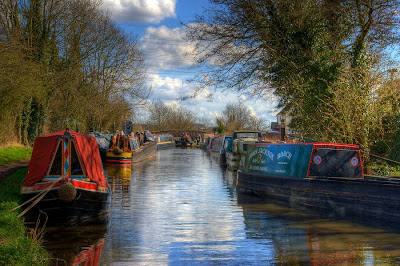 These barges remind me of a bygone year; one that saw a holiday party aboard a vessel much like this in Pennsylvania. It was quite an experience; one that I will never forget. Oh, it wasn't fast-paced or wild in any stretch of the imagination, just co-workers getting together to enjoy one an other's company and to celebrate the passage of another year. Yet, there was something about it that was intriguing, something that spoke of another way of life, one without the need to rush, without the constant pressure of society to succeed, to make more and more money with each passing year. Something like a visit to the Amish country, a view into another life and another way of doing things. Long ago, God spoke to his chosen people and wanted them to return to the old paths, according to the life-style that he had set down. Their response is at the end of the verse.

Jeremiah 6:16 WEB (R)
(16) Thus says Yahweh, Stand you in the ways and see, and ask for the old paths, where is the good way; and walk therein, and you shall find rest for your souls: but they said, We will not walk therein.

New is not ALWAYS BETTER!!! Think of all the chemicals in our food supply and the genetic engineering that is changing the very nature of the food we consume. Consider all the broken homes in this country because spouses are too selfish to compromise. What about all the political wrangling behind closed doors that has been going on lately? How long can this country endure if it continues spending more than it takes in? The founding fathers believed in one nation under God and somehow God is being excluded from every public institution? The answer to our problems is not in science or political solutions, it is in God; his ways, the old paths, tried and true. Hopefully, America will be different from the Israel of Jeremiah's time and seek God before it is too late. If that happened there would be rejoicing throughout our land like never before!! Now that would be one party I would LOVE TO ATTEND! (the barge is optional!!)
Email ThisBlogThis!Share to TwitterShare to FacebookShare to Pinterest
Newer Posts Older Posts Home
Subscribe to: Posts (Atom)