From Gary... The match, the fire and the pain 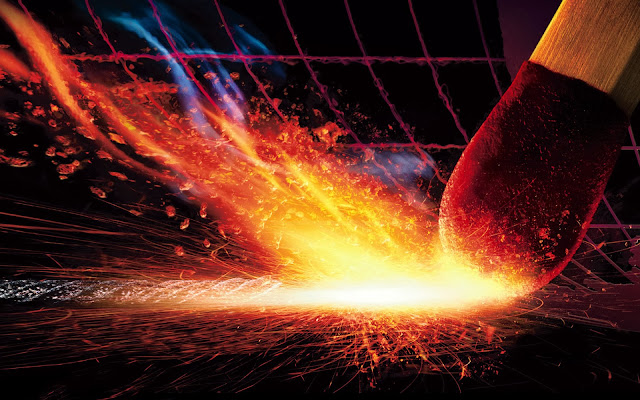 Fire; both useful and dangerous at the same time.  This close-up picture of a match made me think of the the Greek god, Promethus and a recent Science-Fiction movie by the same name.  I also wondered how matches work, so I did a little research on the net...

From Wikipedia, the free encyclopedia
This article is about the Greek mythological figure. Prometheus depicted in a sculpture by Nicolas-Sébastien Adam, 1762 (Louvre)

In Greek mythology, Prometheus (Greek: Προμηθεύς, pronounced [promɛːtʰeús]) is a Titan, culture hero, and trickster figure who is credited with the creation of man from clay, and who defies the gods and gives fire to humanity (theft of fire), an act that enabled progress and civilization. Prometheus is known for his intelligence and as a champion of mankind.[1]

The punishment of Prometheus as a consequence of the theft is a major theme of his mythology, and is a popular subject of both ancient and modern art. Zeus, king of the Olympian gods, sentenced the Titan to eternal torment for his transgression. The immortal Prometheus was bound to a rock, where each day an eagle, the emblem of Zeus, was sent to feed on his liver, which would then grow back to be eaten again the next day. (In ancient Greece, the liver was thought to be the seat of human emotions.)[2] In some stories, Prometheus is freed at last by the hero Heracles (Hercules).

How does a match work?

Although you may not know it, striking a match starts a chemical reaction. There are two types of matches: safety matches and "strike anywhere" matches. A safety match can only light when someone strikes it against the striking surface on the side of the match box. A "strike anywhere" match can be lit by striking the match on anything solid. A "striking surface" is made of sand, powdered glass, and a chemical called "red phosphorus". The head of a safety match is made of sulfur, glass powder, and an oxidizing agent. An oxidizing agent is a chemical that takes electrons from another chemical. When a chemical loses electrons we say it has been oxidized. An oxidizing agent is necessary to keep a flame lit. Oxygen gas is a common oxidizing agent. A simple test for oxygen is to hold a red hot (no flame) piece of wood in a tube of gas that might be oxygen. In oxygen things will burn much faster than in air, and the wood will burst into flame.
When a match is struck on the striking surface of its box, the friction caused by the glass powder rubbing together produces enough heat to turn a very small amount of the red phosphorus into white phosphorus, which catches fire in air. This small amount of heat is enough to start a chemical reaction that uses the oxidizing agent to produce oxygen gas. The heat and oxygen gas then cause the sulfur to burst into flame, which then catches the wood of the match to catch on fire.
A "strike anywhere" match works in a similar way, but instead of phosphorus being on a striking surface, it is added to the head of the match. You can tell the difference between the two types of matches by looking at the colors of the match heads. A safety head is only one color, but a "strike anywhere" match is two colors: one for the phosphorus, and one for the oxidizing agent.

Matthew, Chapter 13
47  “Again, the Kingdom of Heaven is like a dragnet, that was cast into the sea, and gathered some fish of every kind,   48  which, when it was filled, they drew up on the beach. They sat down, and gathered the good into containers, but the bad they threw away.   49  So will it be in the end of the world. The angels will come and separate the wicked from among the righteous,   50  and will cast them into the furnace of fire. There will be the weeping and the gnashing of teeth.”

If you ever have been burnt- you will remember it!!!  I remember once instance from my childhood that will be burned into my memory forever.  My father was putting in a toilet at our house and ordered me to hold a pair of vice-grips that supported a fitting he was soddering.  I was sternly warned that under no circumstances was I to let go- and coming from him, that warning had better be heeded!!!  So, as he began the process, a piece of sodder fell onto the back of my right hand.  The pain was enhanced by the putrid smell of burning flesh and left a scar that remained there for several decades.  So, when Jesus speaks of Gehenna and judgment, I listen- because I remember how painful it was to be burned!!!  Everything in life has consequences and it is really not my place to tell anyone how to live their life.  However, if you classify yourself as wicked, you are in for something that I wouldn't wish on anyone- the fire of Gehenna (Hell, in some Bible versions).  Do everything and anything you can think of to avoid this!!!  As I understand it, turning from sin, obeying the Gospel and being faithful will get you to heaven.  I pray that I will be there and hope to see you there as well; the alternative is unthinkable!!!
Email ThisBlogThis!Share to TwitterShare to FacebookShare to Pinterest
Newer Posts Older Posts Home
Subscribe to: Posts (Atom)