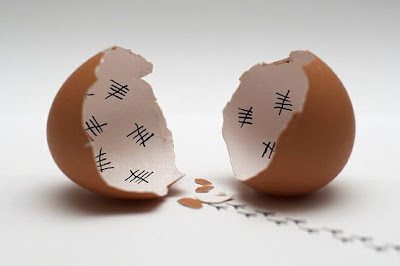 Cute, very cute!!! If I had a humorous nature, I might say that this is a yoke gone wild.  On a more serious note, it does make me wonder when our first thoughts happen.  What is your first memory?  Mine is when I was 5 or 6 (probably 6) and climbed on the school bus with flowers in my hand for a little girl who rode to school with me.  I have no idea who she was, what she looked like, or whatever became of this kindergarten cutie, but I do remember that I liked her a lot.  I wonder how far back memories can go?  Does anyone out there remember events from 2 years of age or younger?  Since life outside the womb is viable after about seven months, I wonder what thoughts could occur BEFORE BIRTH????  Something is going on prior to our first breath of fresh air, that is for sure.  I know this because of the following passage...
WEB: Jeremiah Chapter 1
[1] The words of Jeremiah the son of Hilkiah, of the priests who were in Anathoth in the land of Benjamin: [2] to whom the word of Yahweh came in the days of Josiah the son of Amon, king of Judah, in the thirteenth year of his reign. [3] It came also in the days of Jehoiakim the son of Josiah, king of Judah, to the end of the eleventh year of Zedekiah, the son of Josiah, king of Judah, to the carrying away of Jerusalem captive in the fifth month. [4] Now the word of Yahweh came to me, saying, [5] “Before I formed you in the belly, I knew you. Before you came forth out of the womb, I sanctified you. I have appointed you a prophet to the nations.” [6] Then I said, “Ah, Lord Yahweh! Behold, I don’t know how to speak; for I am a child.”
If someone says that a fetus is less than a human being, then they call God a liar, for he says he knew Jeremiah BEFORE HIS BIRTH!!!  More than that, to end the natural birth process is to directly challenge the authority of God!!!  If God starts something and you stop it, how can that be defined other than sin?  Since a full grown chicken seems to be as dumb as a bag of nails, then the inscribed shell is nothing more than humorous fantasy, but human beings are another matter.  Our country has a lot to answer for because of our actions concerning abortion.  Have no part in abortion, resist it at every level and do what you can to end this affront to God.  I am counting the days until this is ended forever and that has far more meaning than any chicken scratches could ever have.
Email ThisBlogThis!Share to TwitterShare to FacebookShare to Pinterest


Gen 10:1 Now this is the history of the generations of the sons of Noah and of Shem, Ham, and Japheth. Sons were born to them after the flood.
Gen 10:2 The sons of Japheth: Gomer, Magog, Madai, Javan, Tubal, Meshech, and Tiras.
Gen 10:3 The sons of Gomer: Ashkenaz, Riphath, and Togarmah.
Gen 10:4 The sons of Javan: Elishah, Tarshish, Kittim, and Dodanim.
Gen 10:5 Of these were the islands of the nations divided in their lands, everyone after his language, after their families, in their nations.
Gen 10:6 The sons of Ham: Cush, Mizraim, Put, and Canaan.
Gen 10:7 The sons of Cush: Seba, Havilah, Sabtah, Raamah, and Sabteca. The sons of Raamah: Sheba and Dedan.
Gen 10:8 Cush became the father of Nimrod. He began to be a mighty one in the earth.
Gen 10:9 He was a mighty hunter before Yahweh. Therefore it is said, "Like Nimrod, a mighty hunter before Yahweh."
Gen 10:10 The beginning of his kingdom was Babel, Erech, Accad, and Calneh, in the land of Shinar.
Gen 10:11 Out of that land he went forth into Assyria, and built Nineveh, Rehoboth Ir, Calah,
Gen 10:12 and Resen between Nineveh and Calah (the same is the great city).
Gen 10:13 Mizraim became the father of Ludim, Anamim, Lehabim, Naphtuhim,
Gen 10:14 Pathrusim, Casluhim (which the Philistines descended from), and Caphtorim.
Gen 10:15 Canaan became the father of Sidon (his firstborn), Heth,
Gen 10:16 the Jebusite, the Amorite, the Girgashite,
Gen 10:17 the Hivite, the Arkite, the Sinite,
Gen 10:18 the Arvadite, the Zemarite, and the Hamathite. Afterward the families of the Canaanites were spread abroad.
Gen 10:19 The border of the Canaanites was from Sidon, as you go toward Gerar, to Gaza; as you go toward Sodom, Gomorrah, Admah, and Zeboiim, to Lasha.
Gen 10:20 These are the sons of Ham, after their families, after their languages, in their lands, in their nations.
Gen 10:21 To Shem, the father of all the children of Eber, the elder brother of Japheth, to him also were children born.
Gen 10:22 The sons of Shem: Elam, Asshur, Arpachshad, Lud, and Aram.
Gen 10:23 The sons of Aram: Uz, Hul, Gether, and Mash.
Gen 10:24 Arpachshad became the father of Shelah. Shelah became the father of Eber.
Gen 10:25 To Eber were born two sons. The name of the one was Peleg, for in his days the earth was divided. His brother's name was Joktan.
Gen 10:26 Joktan became the father of Almodad, Sheleph, Hazarmaveth, Jerah,
Gen 10:27 Hadoram, Uzal, Diklah,
Gen 10:28 Obal, Abimael, Sheba,
Gen 10:29 Ophir, Havilah, and Jobab. All these were the sons of Joktan.
Gen 10:30 Their dwelling was from Mesha, as you go toward Sephar, the mountain of the east.
Gen 10:31 These are the sons of Shem, after their families, after their languages, in their lands, after their nations.
Gen 10:32 These are the families of the sons of Noah, after their generations, in their nations. Of these were the nations divided in the earth after the flood.
Email ThisBlogThis!Share to TwitterShare to FacebookShare to Pinterest

Hardened by Deceit by Mark Copeland

http://executableoutlines.com/text/he3_13.htm
A very important lesson for us all... Gary
Email ThisBlogThis!Share to TwitterShare to FacebookShare to Pinterest
Newer Posts Older Posts Home
Subscribe to: Posts (Atom)