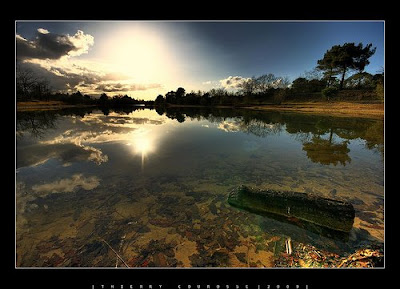 Nice picture! I really like the white of the sky reflected on the water; somehow it is very special. However, that is not why I selected it. Unlike other pictures I have seen this one shows what is beneath the surface of the water as well as the reflection viewed at its surface. People are like this picture; we may see something of their character, but normally we don't get to peer into their inward nature. Jesus could and did and its one of the things that make him very special.

Luke 5:18-26
18 Behold, men brought a paralyzed man on a cot, and they sought to bring him in to lay before Jesus.
19 Not finding a way to bring him in because of the multitude, they went up to the housetop, and let him down through the tiles with his cot into the midst before Jesus.
20 Seeing their faith, he said to him, "Man, your sins are forgiven you."
21 The scribes and the Pharisees began to reason, saying, "Who is this that speaks blasphemies? Who can forgive sins, but God alone?"
22 But Jesus, perceiving their thoughts, answered them, "Why are you reasoning so in your hearts?
23 Which is easier to say, 'Your sins are forgiven you;' or to say, 'Arise and walk?'
24 But that you may know that the Son of Man has authority on earth to forgive sins" (he said to the paralyzed man), "I tell you, arise, and take up your cot, and go to your house."
25 Immediately he rose up before them, and took up that which he was laying on, and departed to his house, glorifying God.
26 Amazement took hold on all, and they glorified God. They were filled with fear, saying, "We have seen strange things today."WEB

The Pharisees were asking a good question; who IS THIS MAN? But along with their question was doubt based on their preconceptions. Still, Jesus doesn't give up on them and asks them the "which is easier?" question instead. They needed to understand who he was and what he was capable of. So, He healed the poor man by just telling him to get up. Object lesson, tactfully performed. And it made them think and that is always a good thing; so is being healed. Jesus was not a reflection of God; HE was GOD, and so had the power to do as HE wished. Humm, I wonder, what is the answer to the double sided question Jesus asked? Perhaps the answer is to be found by asking ourselves whether we are looking at the surface reflection on the water, or what is beneath it?
Email ThisBlogThis!Share to TwitterShare to FacebookShare to Pinterest
Newer Posts Older Posts Home
Subscribe to: Posts (Atom)