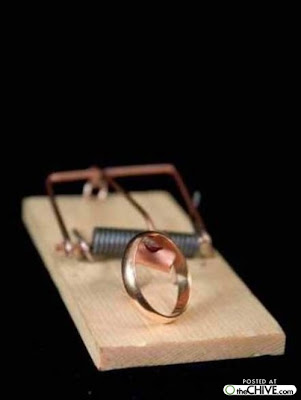 When it comes to marriage, I believe in L-O-N-G engagements! Why? Because marriage is about commitment, not infatuation. LOVE IS A DECISION, not a just feeling. As with any decision, there are consequences and they make change over time, but in the giving of oneself to another it has been my experience that you receive far more than you give. It is only natural that from time to time, the male of the species may feel a little constrained (alright---trapped), but a family needs stability and that means control, which can be interpreted as being trapped. But, true freedom is an illusion, because even single men have to work, pay bills and all the other things it takes to be a responsible adult. While thinking about responsibility, this passage came to mind.

Genesis 3:1-16 WEB (R)
(1) Now the serpent was more subtle than any animal of the field which Yahweh God had made. He said to the woman, "Has God really said, 'You shall not eat of any tree of the garden?' "
(2) The woman said to the serpent, "Of the fruit of the trees of the garden we may eat,
(3) but of the fruit of the tree which is in the middle of the garden, God has said, 'You shall not eat of it, neither shall you touch it, lest you die.' "
(4) The serpent said to the woman, "You won't surely die,
(5) for God knows that in the day you eat it, your eyes will be opened, and you will be like God, knowing good and evil."
(6) When the woman saw that the tree was good for food, and that it was a delight to the eyes, and that the tree was to be desired to make one wise, she took of its fruit, and ate; and she gave some to her husband with her, and he ate.
(7) The eyes of both of them were opened, and they knew that they were naked. They sewed fig leaves together, and made themselves aprons.
(8) They heard the voice of Yahweh God walking in the garden in the cool of the day, and the man and his wife hid themselves from the presence of Yahweh God among the trees of the garden.
(9) Yahweh God called to the man, and said to him, "Where are you?"
(10) The man said, "I heard your voice in the garden, and I was afraid, because I was naked; and I hid myself."
(11) God said, "Who told you that you were naked? Have you eaten from the tree that I commanded you not to eat from?"
(12) The man said, "The woman whom you gave to be with me, she gave me of the tree, and I ate."
(13) Yahweh God said to the woman, "What is this you have done?" The woman said, "The serpent deceived me, and I ate."
(14) Yahweh God said to the serpent, "Because you have done this, cursed are you above all livestock, and above every animal of the field. On your belly you shall go, and you shall eat dust all the days of your life.
(15) I will put enmity between you and the woman, and between your offspring and her offspring. He will bruise your head, and you will bruise his heel."
(16) To the woman he said, "I will greatly multiply your pain in childbirth. In pain you will bring forth children. Your desire will be for your husband, and he will rule over you."

There were problems in the first marriage. Adam didn't think for himself and his wife was a little naive. But she was his wife and he her husband. The consequences of their actions had ramifications far beyond anything they could have even dreamed of. However, God put them together because it was better than being alone and I like to think that neither one is truly complete without the other. Is marriage a trap? I guess the answer most people give will depend if they are happy with their spouse or not. However, as far as I can see, you are OK just as long as you don't try to wiggle out of it... then snap...
Email ThisBlogThis!Share to TwitterShare to FacebookShare to Pinterest

A sense of humor 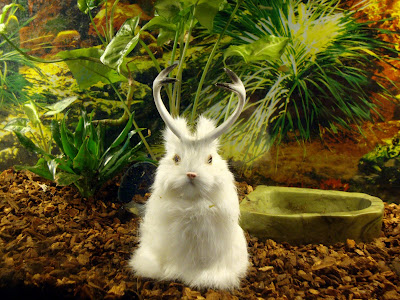 My daughter gave me this picture of a "Jackalope". Some say this is a mythical creature and others that it is a rabbit that has a disease; frankly, I could go either way on the subject. This particular one shares company with a lizard in a modified fish tank and the lizard hasn't said a word either way. So, its origins are open for discussion and I hope at least a few of you will research the topic. When I saw this picture today, I thought of the book of Genesis, in the place where Adam named all the animals.

Genesis 2:19-24 WEB (R)
(19) Out of the ground Yahweh God formed every animal of the field, and every bird of the sky, and brought them to the man to see what he would call them. Whatever the man called every living creature, that was its name.
(20) The man gave names to all livestock, and to the birds of the sky, and to every animal of the field; but for man there was not found a helper suitable for him.
(21) Yahweh God caused a deep sleep to fall on the man, and he slept; and he took one of his ribs, and closed up the flesh in its place.
(22) He made the rib, which Yahweh God had taken from the man, into a woman, and brought her to the man.
(23) The man said, "This is now bone of my bones, and flesh of my flesh. She will be called Woman, because she was taken out of Man."
(24) Therefore a man will leave his father and his mother, and will join with his wife, and they will be one flesh.

If you were expecting to see the Jackalope listed, dream on; its not there. But God did give man the right to call all creatures whatever he wanted, so I guess you can do what you want. There was one special one made for Adam, who was just right for him. And she has been ribbing him ever since. I know this to be true, because my wife has been kidding with me for many, many years. We never have discussed the Jackalope, though, so I guess her kidding days have a bright future. Who says God doesn't have a sense of humor????
Email ThisBlogThis!Share to TwitterShare to FacebookShare to Pinterest
Newer Posts Older Posts Home
Subscribe to: Posts (Atom)