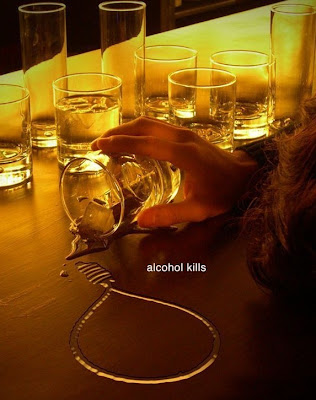 About this time, you are asking the question:"OK, tell me something I don't know?". Everyone knows that alcohol kills, yet, millions upon millions get drunk each year. Why? Is it just for relaxation or release or addiction? Perhaps the buzz that comes along after awhile, or maybe when you can touch your nose and can't feel it? Is it the way people laugh at the silly things you do or the way you walk or the slur in your speech? OH, yes, and maybe its the way you wake up the next day and can't for the life of you remember what you did last night. There is a passage in the book of Leviticus that might provide a little insight into the question of "why shouldn't I take a drink?"....


Leviticus 10:1-11 WEB (R)
(1) Nadab and Abihu, the sons of Aaron, each took his censer, and put fire in it, and laid incense on it, and offered strange fire before Yahweh, which he had not commanded them.
(2) And fire came forth from before Yahweh, and devoured them, and they died before Yahweh.
(3) Then Moses said to Aaron, "This is what Yahweh spoke of, saying, 'I will show myself holy to those who come near me, and before all the people I will be glorified.' " Aaron held his peace.
(4) Moses called Mishael and Elzaphan, the sons of Uzziel the uncle of Aaron, and said to them, "Draw near, carry your brothers from before the sanctuary out of the camp."
(5) So they drew near, and carried them in their coats out of the camp, as Moses had said.
(6) Moses said to Aaron, and to Eleazar and to Ithamar, his sons, "Don't let the hair of your heads go loose, neither tear your clothes; that you don't die, and that he not be angry with all the congregation: but let your brothers, the whole house of Israel, bewail the burning which Yahweh has kindled.
(7) You shall not go out from the door of the Tent of Meeting, lest you die; for the anointing oil of Yahweh is on you." They did according to the word of Moses.
(8) Yahweh spoke to Aaron, saying,
(9) "Drink no wine nor strong drink, you, nor your sons with you, when you go into the Tent of Meeting, that you don't die: it shall be a statute forever throughout your generations:
(10) and that you are to make a distinction between the holy and the common, and between the unclean and the clean;(11) and that you are to teach the children of Israel all the statutes which Yahweh has spoken to them by Moses."


I grew up watching people get drunk. My best friend's bachelor party became a brawl because of liquor. I have counseled more people than I would like to remember over the excesses of imbibing. After 20 or 30 battered wives related their horrible lives, hearing another story became like hearing a broken record. Alcohol kills! What starts out as "just fun" often ends in tragedy. A drunk driver killed my brother-in-law Billy. Yet, the allure of alcohol destroys millions. Why? Because Satan has tricked humans into thinking their lives would be better with it, be more fun, have more excitement. Life has its up's and down's but alcohol is a depressant; it ultimately won't help... it kills! Have problems in your life; turn to God, HE will help. After all, that's why Jesus came to Earth wasn't it? One last thing... I find it interesting that there is a commandment for the priests not to drink wine or strong drink before going into the sanctuary. Why? Perhaps Nadab and Abihu were drunk when they offered strange fire? Doesn't really say, but it does make sense to me! The best way to be careful with alcohol is not to touch it in the first place. Why? Reread this post until the answer comes to you.
Email ThisBlogThis!Share to TwitterShare to FacebookShare to Pinterest 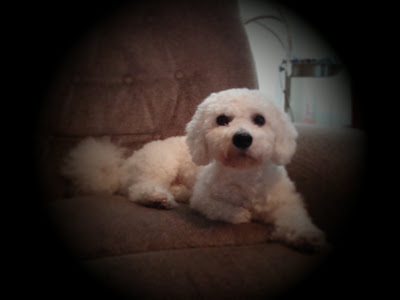 The other day my oldest granddaughter Amanda came over for a visit and she brought her little dog Hercules with her. Cute little dog! But Hercules has some health and behavioral problems caused by a previous owners abuse. Still, I can see that he is improving and someday may be completely well. After awhile he even felt comfortable enough to make himself at home and take up residence on my wife's recliner. How we treat those who are the weakest in our society says a lot about us. We have responsibilities to those less fortunate or weaker than us and of course this includes how we treat our pets. Jesus put it this way...

Matthew 25:34-40 WEB (R)
(34) Then the King will tell those on his right hand, 'Come, blessed of my Father, inherit the Kingdom prepared for you from the foundation of the world;
(35) for I was hungry, and you gave me food to eat. I was thirsty, and you gave me drink. I was a stranger, and you took me in.
(36) I was naked, and you clothed me. I was sick, and you visited me. I was in prison, and you came to me.'
(37) "Then the righteous will answer him, saying, 'Lord, when did we see you hungry, and feed you; or thirsty, and give you a drink?
(38) When did we see you as a stranger, and take you in; or naked, and clothe you?
(39) When did we see you sick, or in prison, and come to you?'
(40) "The King will answer them, 'Most certainly I tell you, inasmuch as you did it to one of the least of these my brothers, you did it to me.'


Caring for others is an expression of the righteousness within our hearts; it is the outward expression of the love within our hearts. If my granddaughter Amanda could look at this poor mistreated animal and do whatever she could to overcome the damage done to it, what about does that say about the greater importance of treating our fellow human beings with compassion, understanding and patience. During the course of our lives, we all may experience "hard times" at one time or another, so when things improve, remember to do the right thing for those around you. The person you help may not sit up pretty in a recliner or jump into your arms like this little dog does, but I assure you that they WILL REMEMBER whatever kindness you show them. So will God on judgment day.
Email ThisBlogThis!Share to TwitterShare to FacebookShare to Pinterest
Newer Posts Older Posts Home
Subscribe to: Posts (Atom)