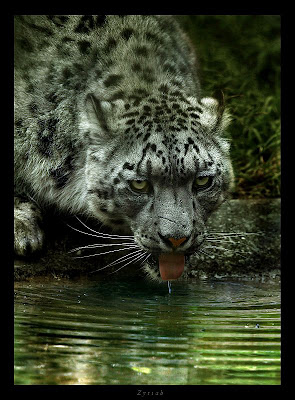 Don't try to sneak up on this cat; its ready for anything! Look at the eyes, they seem to say "I am one dangerous character". You can tell a great deal about people from the way they carry themselves as well. Whether its a shopper in Wal-mart who is frantically throwing things into their basket or someone who is leisurely walking by the side of the road, what you do says a lot about you. God's selection of those who were to fight for Gideon is a good example.
Jdg 7:1 Then Jerubbaal, who is Gideon, and all the people who were with him, rose up early, and encamped beside the spring of Harod: and the camp of Midian was on the north side of them, by the hill of Moreh, in the valley.
Jdg 7:2 Yahweh said to Gideon, The people who are with you are too many for me to give the Midianites into their hand, lest Israel vaunt themselves against me, saying, My own hand has saved me.
Jdg 7:3 Now therefore proclaim in the ears of the people, saying, Whoever is fearful and trembling, let him return and depart from Mount Gilead. There returned of the people twenty-two thousand; and there remained ten thousand.
Jdg 7:4 Yahweh said to Gideon, The people are yet too many; bring them down to the water, and I will try them for you there: and it shall be, that of whom I tell you, This shall go with you, the same shall go with you; and of whoever I tell you, This shall not go with you, the same shall not go.
Jdg 7:5 So he brought down the people to the water: and Yahweh said to Gideon, Everyone who laps of the water with his tongue, as a dog laps, you shall set him by himself; likewise everyone who bows down on his knees to drink.
Jdg 7:6 The number of those who lapped, putting their hand to their mouth, was three hundred men: but all the rest of the people bowed down on their knees to drink water.
Jdg 7:7 Yahweh said to Gideon, By the three hundred men who lapped will I save you, and deliver the Midianites into your hand; and let all the people go every man to his place.
God chose just a few people out of the multitude so that the credit with their victory over the Midianites would not be a prideful thing. By only three hundred men God worked a great victory; men who were cautious and yet unafraid. Are you ready, God is still looking for people to use? Think about that the next time you have some water.
Email ThisBlogThis!Share to TwitterShare to FacebookShare to Pinterest
Newer Posts Older Posts Home
Subscribe to: Posts (Atom)