With a bridge under my feet 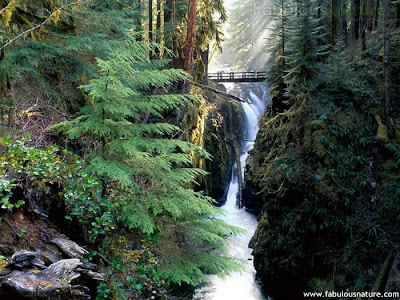 This picture immediately caught my attention because of its beauty. Then the old Simon and Garfunkle song "Bridge over Troubled waters" that I had heard the other day came to mind. I could almost picture myself standing on the bridge singing it. There are all sorts of bridges in our lives; helps from different sources. One of my favorites is found in this little story from the book of 2 Kings.
2 Kings 6:8-18 (WEB)
8) Now the king of Syria was warring against Israel; and he took counsel with his servants, saying, “My camp will be in such and such a place.”
9) The man of God sent to the king of Israel, saying, “Beware that you not pass such a place; for the Syrians are coming down there.”
10) The king of Israel sent to the place which the man of God told him and warned him of; and he saved himself there, not once nor twice.
11) The heart of the king of Syria was very troubled about this. He called his servants, and said to them, “Won’t you show me which of us is for the king of Israel?”
12) One of his servants said, “No, my lord, O king; but Elisha, the prophet who is in Israel, tells the king of Israel the words that you speak in your bedroom.”
13) He said, “Go and see where he is, that I may send and get him.” It was told him, saying, “Behold, he is in Dothan.”
14) Therefore he sent horses, chariots, and a great army there. They came by night, and surrounded the city.
15) When the servant of the man of God had risen early, and gone out, behold, an army with horses and chariots was around the city. His servant said to him, “Alas, my master! What shall we do?”
16) He answered, “Don’t be afraid; for those who are with us are more than those who are with them.”
17) Elisha prayed, and said, “Yahweh, please open his eyes, that he may see.” Yahweh opened the eyes of the young man; and he saw: and behold, the mountain was full of horses and chariots of fire around Elisha.
18) When they came down to him, Elisha prayed to Yahweh, and said, “Please strike this people with blindness.” He struck them with blindness according to the word of Elisha.
(2 Kings 6:8-18, WEB)

Go ahead, try and figure your life out! You will fail. Why? Because there is a whole spiritual realm out there that we can not see. We are not alone, God helps those who HE desires to and really does help in our most needful circumstances. Elisha was blessed with the ability to be able to literally see what God could provide, but we have to be content with the eyes of faith. Hopefully, for most of us, faith is enough. Whenever I hear "a bridge over troubled waters", I always associate the one who helps as being God. Works for me.... next time you hear the song, I hope it does for you as well.
Email ThisBlogThis!Share to TwitterShare to FacebookShare to Pinterest
Newer Posts Older Posts Home
Subscribe to: Posts (Atom)