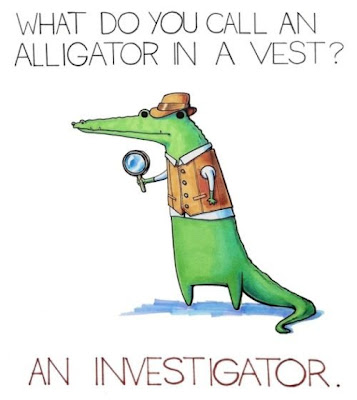 I came across this picture today and it made me chuckle.  OK, it isn't a roll on the floor joke, but it is a LITTLE FUNNY!!  Then, I thought how we all are investigators; how we all search for something, one way or another.  We look for friends when we start school, we look for a mate, we are forever checking on our kids and we look forward to success in life and retirement.  Always looking; hopefully with success.  Then, as I turned my attention to the Scriptures, I straightway thought of this passage from Peter's first letter....

1st Peter, Chapter 1
1 Peter, an apostle of Jesus Christ, to the chosen ones who are living as foreigners in the Dispersion in Pontus, Galatia, Cappadocia, Asia, and Bithynia, 2 according to the foreknowledge of God the Father, in sanctification of the Spirit, that you may obey Jesus Christ and be sprinkled with his blood: Grace to you and peace be multiplied.  3 Blessed be the God and Father of our Lord Jesus Christ, who according to his great mercy became our father again to a living hope through the resurrection of Jesus Christ from the dead,  4 to an incorruptible and undefiled inheritance that doesn’t fade away, reserved in Heaven for you,  5 who by the power of God are guarded through faith for a salvation ready to be revealed in the last time.  6 Wherein you greatly rejoice, though now for a little while, if need be, you have been put to grief in various trials,  7 that the proof of your faith, which is more precious than gold that perishes even though it is tested by fire, may be found to result in praise, glory, and honor at the revelation of Jesus Christ—  8 whom not having known you love; in whom, though now you don’t see him, yet believing, you rejoice greatly with joy unspeakable and full of glory— 9 receiving the result of your faith, the salvation of your souls.  10 Concerning this salvation, the prophets sought and searched diligently, who prophesied of the grace that would come to you, 11 searching for who or what kind of time the Spirit of Christ, which was in them, pointed to, when he predicted the sufferings of Christ, and the glories that would follow them.  12 To them it was revealed, that not to themselves, but to you, they ministered these things, which now have been announced to you through those who preached the Good News to you by the Holy Spirit sent out from heaven; which things angels desire to look into.

We may or may NOT succeed in life, who knows what our lives will turn out to be, but we do have the complete story spiritually.  We can read this passage and understand that many, many people didn't have the whole story, even angels. We do and all we have to do is follow the example of the first Christians.  Simple, just begin by earnestly seeking God, and reading HIS WORD, The Bible.  You will find the blessing you are looking for beginning with the passage from Peter's first letter and then going on to the book of Acts... Read the first couple of chapters, your search will be successful; IF you read with an open mind.  Any questions?  Drop me a line and I will help!!!

"ACTS OF THE APOSTLES" Chapter Twenty-Four by Mark Copeland