Anyone seen MACGYVER? I could use a little help!!! 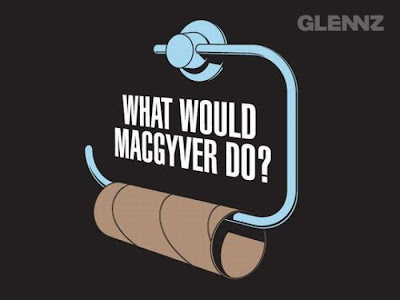 Sooner or later we all face this situation; you have to go, but there is no paper in the restroom. This picture raises an interesting question: What would MACGYVER do? This TV star uses his intellect and resourcefulness to make the impossible, possible. We all know that its just TV and not reality, BUT, what if someone could make something out of almost "nothing"? Something somewhat similar happens several times in the New Testament and what follows is one of those instances.
Matthew 15:32-38 (WEB)
32) Jesus summoned his disciples and said, “I have compassion on the multitude, because they continue with me now three days and have nothing to eat. I don’t want to send them away fasting, or they might faint on the way.”
33) The disciples said to him, “Where should we get so many loaves in a deserted place as to satisfy so great a multitude?”
34) Jesus said to them, “How many loaves do you have?” They said, “Seven, and a few small fish.”
35) He commanded the multitude to sit down on the ground;
36) and he took the seven loaves and the fish. He gave thanks and broke them, and gave to the disciples, and the disciples to the multitudes.
37) They all ate, and were filled. They took up seven baskets full of the broken pieces that were left over.
38) Those who ate were four thousand men, besides women and children.
(Matthew 15:32-38, WEB)

Unlike the picture, this episode was initiated by love and concern and NOT immediate need. How did Jesus really do it? I haven't a clue, except to say that Jesus was a man, but more than a man. His power goes way beyond my feeble understanding. God is like that, you know! As far as the picture goes... I would cut the cardboard with my box cutter (did I say that I almost always carry a box cutter at work?) into four pieces for use as four blotters. Anyone have a better idea, please let me know.
Email ThisBlogThis!Share to TwitterShare to FacebookShare to Pinterest
Newer Posts Older Posts Home
Subscribe to: Posts (Atom)