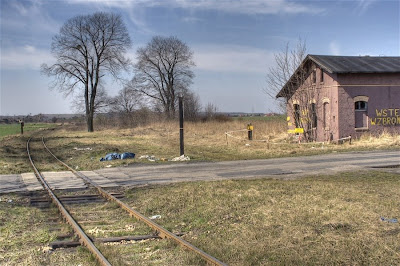 This picture is unusual because it isn't. No, this isn't double talk. Most of the time I select pictures for the blog that are unusual and mean something to me, but in this instance I deliberately chose something that was ordinary to prove a point to myself. Most of our lives are spent doing ordinary down-to-earth every day things. We take a lot of things in that "ordinary" life for granted; working, commuting, buying gas, having meals, etc.. Then something happens and a typical ordinary day changes into something very memorable. This was the case in the life of one man as told in the book of Acts.
Act 8:26 But an angel of the Lord spoke to Philip, saying, Rise up and go along south on the highway going down to Jerusalem to Gaza. This is a deserted place.
Act 8:27 And rising up he went. And, behold, an Ethiopian man, a eunuch, a potentate with Candace, the queen of the Ethiopians, who was over all her treasure, who had come to Jerusalem to worship!
Act 8:28 And he was returning. And sitting on his chariot he read the prophet Isaiah.
Act 8:29 And the Spirit said to Philip, Go near and join yourself to this chariot.
Act 8:30 And running near Philip heard him reading the prophet Isaiah, and said, Indeed, do you know what you are reading?
Act 8:31 But he said, How should I be able except someone shall guide me? And he called Philip near, to come up to sit with him.
Act 8:32 And the content of the Scripture which he was reading was this: "He was led as a sheep to slaughter, and as a lamb voiceless before the one shearing it, so He does not open His mouth.
Act 8:33 In His humiliation His judgment was taken away. And who will recount His generation? For His life is taken away from the earth." Isa. 53:7, 8
Act 8:34 And answering the eunuch said to Philip, I ask you, about whom does the prophet say this? About himself, or about some other one?
Act 8:35 And opening his mouth, and beginning from this Scripture, Philip announced the gospel to him, Jesus.
Act 8:36 And as they were going along the highway they came on some water. And the eunuch said, Behold, water! What prevents me to be baptized?
Act 8:37 And Philip said, If you believe from all the heart, it is lawful. And answering he said, I believe Jesus Christ to be the Son of God.
Act 8:38 And he commanded the chariot to stand still. And both went down into the water, both Philip and the eunuch; and he baptized him.
Act 8:39 But when they came up out of the water, the Spirit of the Lord caught away Philip. And the eunuch did not see him any more; for he went his way rejoicing.
LITV
Philip went to a deserted place because an angel told him to and he met the Ethiopian eunuch of Candace. There he told the eunuch about Jesus, he was baptized and went on his way. There you are, an ordinary day in an ordinary place, but something wonderful happened. Life is full of things like this, you don't look for them, they just seem to happen. Well, maybe yes and maybe no. I am of the disposition that God has something in store for each and every one of us, so be on the lookout, something wonderful may yet come your way this very day. An angel of the Lord may or may not be involved, but who knows what is next?