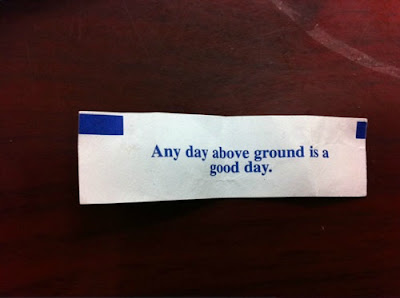 During the course of the last four+ years, I probably have looked at 10,000 or more pictures on the net, but today I saw this little saying that I have been using for much more than a decade.  I started using it sometime in the 90's, but I am not sure of the exact year.  I suffered from what was wrongly diagnosed as Meniere's disease, but turned out to be a chiropractic problem.  I realized then that I need to thank God for ANY day I was alive, no matter how much I suffered.  That attitude continues to this day and is expressed in the 148th Psalm (which coincidentally was number 148 in our hymnbook).

1 Praise Yah!Praise Yahweh from the heavens!Praise him in the heights!  2 Praise him, all his angels!Praise him, all his army!  3 Praise him, sun and moon!Praise him, all you shining stars!  4 Praise him, you heavens of heavens,You waters that are above the heavens.  5 Let them praise the name of Yahweh,For he commanded, and they were created.  6 He has also established them forever and ever.He has made a decree which will not pass away.  7 Praise Yahweh from the earth,you great sea creatures, and all depths!  8 Lightning and hail, snow and clouds;stormy wind, fulfilling his word;  9 mountains and all hills;fruit trees and all cedars;  10 wild animals and all livestock;small creatures and flying birds;  11 kings of the earth and all peoples;princes and all judges of the earth;  12 both young men and maidens;old men and children:  13 let them praise the name of Yahweh,for his name alone is exalted.His glory is above the earth and the heavens.
14 He has lifted up the horn of his people,the praise of all his saints;even of the children of Israel, a people near to him.Praise Yah!
Although most translations use Jehovah instead of the correct Yahweh, the music works for either one.  Today is a special day of thanksgiving as we found out that my wife IS GOING TO RECOVER FROM HER SURGERY AFTER ALL.  Thank God we caught the problem in time and acted immediately!!! Once again I am reminded how this little saying is always appropriate.... I just needed to be reminded!!!!  Smile, if you feel the same way!!!!

Gary
Email ThisBlogThis!Share to TwitterShare to FacebookShare to Pinterest

Php 2:1 If there is therefore any exhortation in Christ, if any consolation of love, if any fellowship of the Spirit, if any tender mercies and compassion,
Php 2:2 make my joy full, by being like-minded, having the same love, being of one accord, of one mind;
Php 2:3 doing nothing through rivalry or through conceit, but in humility, each counting others better than himself;
Php 2:4 each of you not just looking to his own things, but each of you also to the things of others.
Php 2:5 Have this in your mind, which was also in Christ Jesus,
Php 2:6 who, existing in the form of God, didn't consider equality with God a thing to be grasped,
Php 2:7 but emptied himself, taking the form of a servant, being made in the likeness of men.
Php 2:8 And being found in human form, he humbled himself, becoming obedient to death, yes, the death of the cross.
Php 2:9 Therefore God also highly exalted him, and gave to him the name which is above every name;
Php 2:10 that at the name of Jesus every knee should bow, of those in heaven, those on earth, and those under the earth,
Php 2:11 and that every tongue should confess that Jesus Christ is Lord, to the glory of God the Father.
Php 2:12 So then, my beloved, even as you have always obeyed, not only in my presence, but now much more in my absence, work out your own salvation with fear and trembling.
Php 2:13 For it is God who works in you both to will and to work, for his good pleasure.
Php 2:14 Do all things without murmurings and disputes,
Php 2:15 that you may become blameless and harmless, children of God without blemish in the midst of a crooked and perverse generation, among whom you are seen as lights in the world,
Php 2:16 holding up the word of life; that I may have something to boast in the day of Christ, that I didn't run in vain nor labor in vain.
Php 2:17 Yes, and if I am poured out on the sacrifice and service of your faith, I rejoice, and rejoice with you all.
Php 2:18 In the same way, you also rejoice, and rejoice with me.
Php 2:19 But I hope in the Lord Jesus to send Timothy to you soon, that I also may be cheered up when I know how you are doing.
Php 2:20 For I have no one else like-minded, who will truly care about you.
Php 2:21 For they all seek their own, not the things of Jesus Christ.
Php 2:22 But you know the proof of him, that, as a child serves a father, so he served with me in furtherance of the Good News.
Php 2:23 Therefore I hope to send him at once, as soon as I see how it will go with me.
Php 2:24 But I trust in the Lord that I myself also will come shortly.
Php 2:25 But I counted it necessary to send to you Epaphroditus, my brother, fellow worker, fellow soldier, and your apostle and servant of my need;
Php 2:26 since he longed for you all, and was very troubled, because you had heard that he was sick.
Php 2:27 For indeed he was sick, nearly to death, but God had mercy on him; and not on him only, but on me also, that I might not have sorrow on sorrow.
Php 2:28 I have sent him therefore the more diligently, that, when you see him again, you may rejoice, and that I may be the less sorrowful.
Php 2:29 Receive him therefore in the Lord with all joy, and hold such in honor,
Php 2:30 because for the work of Christ he came near to death, risking his life to supply that which was lacking in your service toward me.
Email ThisBlogThis!Share to TwitterShare to FacebookShare to Pinterest