What does, and what does NOT measure up! 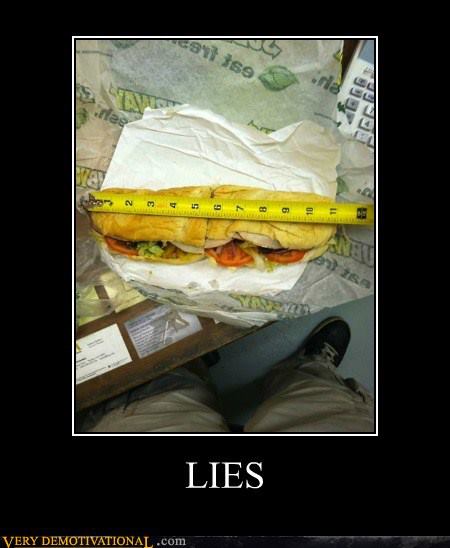 Over the past year, I have grown to LOVE Subway's footlong subs (submarine sandwiches, hoagies, torpedo's or what you want to call them).  Eating them at least once a week (after a weight watcher's meeting) has become a habit that I really enjoy!!!  But, there is a problem; and just one glance at the picture will tell you what it is!!!  A foot-long is not really a foot-long!!!! Another example of someone stretching (or should I say - shrinking) the truth.  A few decades ago, this misrepresentation would have seemed outrageous, but today? I think NOT!  It is common in our society for people to believe that everyone is right and truth is relative.  However, if all are right, how can there be any truth at all?  There is "the truth"!!!!  It does not originate with man, but rather with Almighty God!!!  Moreover, it MUST BE OBEYED!!! Paul puts it this way...

1 Foolish Galatians, who has bewitched you not to obey the truth, before whose eyes Jesus Christ was openly portrayed among you as crucified?

Jesus believed, practiced and died for "the truth".  Apart from him there is no truth, or life beyond life.  Believing otherwise is as foolish as believing that a "foot-long" is really a foot-long.  Jesus is exactly as advertised.  He really did the things the Bible said he did; he measures up to any and all standards.  Do you?

Gen 48:1 It happened after these things, that someone said to Joseph, "Behold, your father is sick." He took with him his two sons, Manasseh and Ephraim.
Gen 48:2 Someone told Jacob, and said, "Behold, your son Joseph comes to you," and Israel strengthened himself, and sat on the bed.
Gen 48:3 Jacob said to Joseph, "God Almighty appeared to me at Luz in the land of Canaan, and blessed me,
Gen 48:4 and said to me, 'Behold, I will make you fruitful, and multiply you, and I will make of you a company of peoples, and will give this land to your seed after you for an everlasting possession.'
Gen 48:5 Now your two sons, who were born to you in the land of Egypt before I came to you into Egypt, are mine; Ephraim and Manasseh, even as Reuben and Simeon, will be mine.
Gen 48:6 Your issue, who you become the father of after them, will be yours. They will be called after the name of their brothers in their inheritance.
Gen 48:7 As for me, when I came from Paddan, Rachel died by me in the land of Canaan in the way, when there was still some distance to come to Ephrath, and I buried her there in the way to Ephrath (the same is Bethlehem)."
Gen 48:8 Israel saw Joseph's sons, and said, "Who are these?"
Gen 48:9 Joseph said to his father, "They are my sons, whom God has given me here." He said, "Please bring them to me, and I will bless them."
Gen 48:10 Now the eyes of Israel were dim for age, so that he couldn't see. He brought them near to him; and he kissed them, and embraced them.
Gen 48:11 Israel said to Joseph, "I didn't think I would see your face, and behold, God has let me see your seed also."
Gen 48:12 Joseph brought them out from between his knees, and he bowed himself with his face to the earth.
Gen 48:13 Joseph took them both, Ephraim in his right hand toward Israel's left hand, and Manasseh in his left hand toward Israel's right hand, and brought them near to him.
Gen 48:14 Israel stretched out his right hand, and laid it on Ephraim's head, who was the younger, and his left hand on Manasseh's head, guiding his hands knowingly, for Manasseh was the firstborn.
Gen 48:15 He blessed Joseph, and said, "The God before whom my fathers Abraham and Isaac did walk, the God who has fed me all my life long to this day,
Gen 48:16 the angel who has redeemed me from all evil, bless the lads, and let my name be named on them, and the name of my fathers Abraham and Isaac. Let them grow into a multitude in the midst of the earth."
Gen 48:17 When Joseph saw that his father laid his right hand on the head of Ephraim, it displeased him. He held up his father's hand, to remove it from Ephraim's head to Manasseh's head.
Gen 48:18 Joseph said to his father, "Not so, my father; for this is the firstborn; put your right hand on his head."
Gen 48:19 His father refused, and said, "I know, my son, I know. He also will become a people, and he also will be great. However, his younger brother will be greater than he, and his seed will become a multitude of nations."
Gen 48:20 He blessed them that day, saying, "In you will Israel bless, saying, 'God make you as Ephraim and as Manasseh' " He set Ephraim before Manasseh.
Gen 48:21 Israel said to Joseph, "Behold, I am dying, but God will be with you, and bring you again to the land of your fathers.
Gen 48:22 Moreover I have given to you one portion above your brothers, which I took out of the hand of the Amorite with my sword and with my bow."

THE CHURCH OF WHOSE CHOICE by Gary Womack

THE CHURCH OF WHOSE CHOICE

As the gospel began to be proclaimed in Jerusalem on Pentecost after Jesus' ascension to heaven, many responded to that invitation of forgiveness. On that occasion we find that "the Lord added to the church daily those who were being saved." (Acts 2:47) Notice a couple of important points here. (1) Those who were added to the church were people "who were being saved." It is obvious then, that the church is made up of saved people. This was the plea of the apostles, "Be saved from this perverse generation." (Acts 2:40) It was the question of greatest inquiry on that day; "Men and brethren, what shall we do?" (Acts 2:37) It was the answer to the worlds longest standing query; "Repent, and let every one of you be baptized in the name of Jesus Christ for the remission of sins..." (Acts 2:38) (2) The other thing we must notice is that the church is not a world-wide organization that these obedient believers were "joining" as some have the concept of joining a club. They were being "added" by the Lord. As more became obedient to the gospel it is said that "believers were added to the Lord, multitudes of both men and women." (Acts 5:14) This "adding to" has with it the same idea of a marriage as ordained by God. Jesus said, "...a man shall leave his father and mother and be joined to his wife, and the two shall become one flesh." (Mt. 19:5) When obedient believers are joined to the Lord, they have entered a relationship with Him which is binding as that of marriage. In regard to marriage, Jesus said, "Therefore what God has joined together, let not man separate." (Mt. 19:6) God does the joining together in marriage as He does the "adding to" the church.
It is said of these new christians that "they continued steadfastly in the apostles' doctrine and fellowship, in the breaking of bread, and in prayers." (Acts2:42) It is also said that they "continued daily with one accord in the temple..." (Acts 2:46) Herein we see harmony and unity among the people of God as it should be. If you will notice, there was no "choosing the church of your choice" during all of this early growth of the church. Until you get to the eighth chapter of Acts, where it tells of the church being scattered due to persecution, there was no other church to be found except in the city of Jerusalem. If the saved were only those who were added to the church by the Lord, and if there was only one church to be found anywhere except in Jerusalem, would we be bigoted to say that the only people who were saved were the people who were members of the church that was in Jerusalem? Certainly not! But such would not remain the case as time continued.
As early as about 50 AD, there arose a conflict at the church in Antioch over some false doctrine that was being spread regarding circumcision. "Certain men came down from Judea and taught the brethren, 'Unless you are circumcised according to the custom of Moses, you cannot be saved.'" (Acts 15:1) That chapter records how the apostles and elders dealt with that problem, however, in that circumstance we see the beginnings of how error could influence those in the church.
About four years later, when Paul was working with the church in Ephesus, "And he went into the synagogue and spoke boldly for three months, reasoning and persuading concerning the things of the kingdom of God...some were hardened and did not believe, but spoke evil of the Way before the multitude..." Therefore, "he departed from them and withdrew the disciples, reasoning daily in the school of Tyrannus. And this continued for two years, so that all who dwelt in Asia heard the word of the Lord Jesus, both Jews and Greeks." (Acts 19:8-10) Christians traveling to Ephesus had at least two choices of where to worship, the synagogue where truth was not accepted, or the church that met at the School of Tyrannus. Here we see how truth draws the line that divides religions.
Some time after Paul left Ephesus to teach elsewhere, he passed by Ephesus on his way to Jerusalem. In that brief visit, Paul gave solemn warning to the elders of the church in that city, saying, "For I know this, that after my departure savage wolves will come in among you, not sparing the flock. Also from among yourselves men will rise up, speaking perverse things, to draw away the disciples after themselves." (Acts 20:29-30) The introduction of sin would result in division.
When Paul addressed the concerns of the church at Thessalonica regarding a false doctrine that they had been led to believe, namely, "concerning the coming of our Lord Jesus Christ and our gathering together to Him...as though the day of Christ had come." (2 Thess. 2:1-2), he warned, "Let no one deceive you by any means; for that Day will not come unless the falling away comes first, and the man of sin is revealed, the son of perdition." (2 Thess. 2:3) The day would come when Christians would "fall away" from the truth. The result would be division.
Today we see the results of that falling away all around us. Thousands of varying religions pull in all directions as they vie for converts to their own faith, while encouraging people to "join the church of your choice." Consequently, people searching for the Lord's church end up "shopping" for religion.