Put your best face forward; a picture of a traitor. 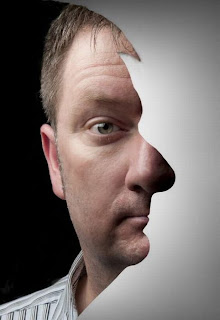 Two faced!!!  I have known people who are like that, but until now had never seen a picture of one!!!  The cleverness of the photographer is amazing!!!  Real life is another matter; people can deceive you.  You think you have a friend and when you discover their true nature, the pain is incredible!!!!  When you find out, the natural question that comes to mind is: How could they do that?  I wish I knew the answer to such things, but, alas, it has always been a mystery to me.  In the Bible, the preeminent traitor is Judas Iscariot and here is his unveiling...
WEB: Matthew Chapter 26
[14] Then one of the twelve, who was called Judas Iscariot, went to the chief priests, [15] and said, “What are you willing to give me, that I should deliver him to you?” They weighed out for him thirty pieces of silver. [16] From that time he sought opportunity to betray him.

[17] Now on the first day of unleavened bread, the disciples came to Jesus, saying to him, “Where do you want us to prepare for you to eat the Passover?”

[18] He said, "“Go into the city to a certain person, and tell him, ‘The Teacher says, “My time is at hand. I will keep the Passover at your house with my disciples.”’”"

[19] The disciples did as Jesus commanded them, and they prepared the Passover. [20] Now when evening had come, he was reclining at the table with the twelve disciples. [21] As they were eating, he said, "“Most certainly I tell you that one of you will betray me.”"

[23] He answered, "“He who dipped his hand with me in the dish, the same will betray me. [24] The Son of Man goes, even as it is written of him, but woe to that man through whom the Son of Man is betrayed! It would be better for that man if he had not been born.”"

He said to him, "“You said it.”"
Why did Judas betray Jesus?  What could possibly be going through his mind to do such a thing?  Its not that he just met him, for he was with him about three years of itinerant preaching.  It could have been the money, because the scriptures say that he would steal from the general funds the group possessed.  Perhaps it was a combination of a desire to force Jesus' hand to greatness (as Judas says in his "gospel") along with his Judas' own greed, who knows???  Whatever the motive, he should have guessed that his betrayal method was incompatible with Jesus' lifestyle and teachings!  But, Judas did what he had to do and ultimately mankind was blessed by it!!!!  Judas' own blessing was his suicide and somehow it seems appropriate, considering what he did.  Sorry, but I just don't get this man and probably never will!!!  He should have faced up to his actions, repented and moved on, but that's the trouble with two faces (wills), you just never know which face is the correct one to put forward?
Email ThisBlogThis!Share to TwitterShare to FacebookShare to Pinterest


Mat 9:1 He entered into a boat, and crossed over, and came into his own city.
Mat 9:2 Behold, they brought to him a man who was paralyzed, lying on a bed. Jesus, seeing their faith, said to the paralytic, "Son, cheer up! Your sins are forgiven you."
Mat 9:3 Behold, some of the scribes said to themselves, "This man blasphemes."
Mat 9:4 Jesus, knowing their thoughts, said, "Why do you think evil in your hearts?
Mat 9:5 For which is easier, to say, 'Your sins are forgiven;' or to say, 'Get up, and walk?'
Mat 9:6 But that you may know that the Son of Man has authority on earth to forgive sins..." (then he said to the paralytic), "Get up, and take up your mat, and go up to your house."
Mat 9:7 He arose and departed to his house.
Mat 9:8 But when the multitudes saw it, they marveled and glorified God, who had given such authority to men.
Mat 9:9 As Jesus passed by from there, he saw a man called Matthew sitting at the tax collection office. He said to him, "Follow me." He got up and followed him.
Mat 9:10 It happened as he sat in the house, behold, many tax collectors and sinners came and sat down with Jesus and his disciples.
Mat 9:11 When the Pharisees saw it, they said to his disciples, "Why does your teacher eat with tax collectors and sinners?"
Mat 9:12 When Jesus heard it, he said to them, "Those who are healthy have no need for a physician, but those who are sick do.
Mat 9:13 But you go and learn what this means: 'I desire mercy, and not sacrifice,' for I came not to call the righteous, but sinners to repentance."
Mat 9:14 Then John's disciples came to him, saying, "Why do we and the Pharisees fast often, but your disciples don't fast?"
Mat 9:15 Jesus said to them, "Can the friends of the bridegroom mourn, as long as the bridegroom is with them? But the days will come when the bridegroom will be taken away from them, and then they will fast.
Mat 9:16 No one puts a piece of unshrunk cloth on an old garment; for the patch would tear away from the garment, and a worse hole is made.
Mat 9:17 Neither do people put new wine into old wineskins, or else the skins would burst, and the wine be spilled, and the skins ruined. No, they put new wine into fresh wineskins, and both are preserved."
Mat 9:18 While he told these things to them, behold, a ruler came and worshiped him, saying, "My daughter has just died, but come and lay your hand on her, and she will live."
Mat 9:19 Jesus got up and followed him, as did his disciples.
Mat 9:20 Behold, a woman who had an issue of blood for twelve years came behind him, and touched the fringe of his garment;
Mat 9:21 for she said within herself, "If I just touch his garment, I will be made well."
Mat 9:22 But Jesus, turning around and seeing her, said, "Daughter, cheer up! Your faith has made you well." And the woman was made well from that hour.
Mat 9:23 When Jesus came into the ruler's house, and saw the flute players, and the crowd in noisy disorder,
Mat 9:24 he said to them, "Make room, because the girl isn't dead, but sleeping." They were ridiculing him.
Mat 9:25 But when the crowd was put out, he entered in, took her by the hand, and the girl arose.
Mat 9:26 The report of this went out into all that land.
Mat 9:27 As Jesus passed by from there, two blind men followed him, calling out and saying, "Have mercy on us, son of David!"
Mat 9:28 When he had come into the house, the blind men came to him. Jesus said to them, "Do you believe that I am able to do this?" They told him, "Yes, Lord."
Mat 9:29 Then he touched their eyes, saying, "According to your faith be it done to you."
Mat 9:30 Their eyes were opened. Jesus strictly commanded them, saying, "See that no one knows about this."
Mat 9:31 But they went out and spread abroad his fame in all that land.
Mat 9:32 As they went out, behold, a mute man who was demon possessed was brought to him.
Mat 9:33 When the demon was cast out, the mute man spoke. The multitudes marveled, saying, "Nothing like this has ever been seen in Israel!"
Mat 9:34 But the Pharisees said, "By the prince of the demons, he casts out demons."
Mat 9:35 Jesus went about all the cities and the villages, teaching in their synagogues, and preaching the Good News of the Kingdom, and healing every disease and every sickness among the people.
Mat 9:36 But when he saw the multitudes, he was moved with compassion for them, because they were harassed and scattered, like sheep without a shepherd.
Mat 9:37 Then he said to his disciples, "The harvest indeed is plentiful, but the laborers are few.
Mat 9:38 Pray therefore that the Lord of the harvest will send out laborers into his harvest."

The anatomy of a backslider by Mark Copeland

Why do people fall away?  ... Gary
Email ThisBlogThis!Share to TwitterShare to FacebookShare to Pinterest
Newer Posts Older Posts Home
Subscribe to: Posts (Atom)