When a rainbow is not a rainbow... 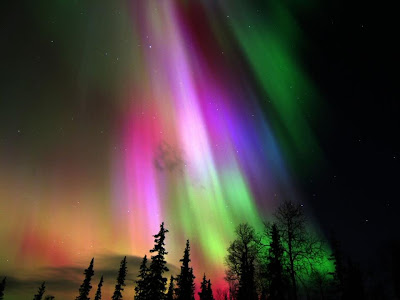 At first glance, I thought this was a rainbow.  I know that it is the aurora borealis, but sometimes when you look at something, it reminds you of something else.  And that is exactly what happened here.  This phenomenon is caused by the rays of the sun interacting with our upper atmosphere causing this display!  A rainbow is an entirely different exhibition of interactions.  All this made me think of the division that exists within "Christianity".  It seems that everyone wants to do their "own thing"; with no consideration (or in some cases, very little) of what the Bible has to say.  Instead of using Bible terms for something as simple as the name of the group, they use names like Lutheran, catholic, Presbyterian, etc..  Instead of following God, many follow men, like in the instance mentioned in this passage from 1 Corinthians...

1 Corinthians, Chapter 1
10 Now I beg you, brothers, through the name of our Lord, Jesus Christ, that you all speak the same thing and that there be no divisions among you, but that you be perfected together in the same mind and in the same judgment.  11 For it has been reported to me concerning you, my brothers, by those who are from Chloe’s household, that there are contentions among you.  12 Now I mean this, that each one of you says, “I follow Paul,” “I follow Apollos,” “I follow Cephas,” and, “I follow Christ.”  13 Is Christ divided? Was Paul crucified for you? Or were you baptized into the name of Paul?

Like the picture above, they might look somewhat like the genuine article, but they are not!!!  The foundation for the true church is found in the Bible and its Jesus and the teachings of his apostles.  If you can't find a book, chapter and verse for what you believe or what you do.... STOP, NOW!!!  There are many extremely intelligent people out there who can make white seem black, or the other way round... at will.  Do not be fooled, go back to the Bible for your beliefs.  Remember, a rainbow is a rainbow and not something else.  Question everything, prove everything and let the Bible be your guide!!!
Email ThisBlogThis!Share to TwitterShare to FacebookShare to Pinterest

Act 14:1 It happened in Iconium that they entered together into the synagogue of the Jews, and so spoke that a great multitude both of Jews and of Greeks believed.
Act 14:2 But the disbelieving Jews stirred up and embittered the souls of the Gentiles against the brothers.
Act 14:3 Therefore they stayed there a long time, speaking boldly in the Lord, who testified to the word of his grace, granting signs and wonders to be done by their hands.
Act 14:4 But the multitude of the city was divided. Part sided with the Jews, and part with the apostles.
Act 14:5 When some of both the Gentiles and the Jews, with their rulers, made a violent attempt to mistreat and stone them,
Act 14:6 they became aware of it, and fled to the cities of Lycaonia, Lystra, Derbe, and the surrounding region.
Act 14:7 There they preached the Good News.
Act 14:8 At Lystra a certain man sat, impotent in his feet, a cripple from his mother's womb, who never had walked.
Act 14:9 He was listening to Paul speaking, who, fastening eyes on him, and seeing that he had faith to be made whole,
Act 14:10 said with a loud voice, "Stand upright on your feet!" He leaped up and walked.
Act 14:11 When the multitude saw what Paul had done, they lifted up their voice, saying in the language of Lycaonia, "The gods have come down to us in the likeness of men!"
Act 14:12 They called Barnabas "Jupiter," and Paul "Mercury," because he was the chief speaker.
Act 14:13 The priest of Jupiter, whose temple was in front of their city, brought oxen and garlands to the gates, and would have made a sacrifice along with the multitudes.
Act 14:14 But when the apostles, Barnabas and Paul, heard of it, they tore their clothes, and sprang into the multitude, crying out,
Act 14:15 "Men, why are you doing these things? We also are men of like passions with you, and bring you good news, that you should turn from these vain things to the living God, who made the sky and the earth and the sea, and all that is in them;
Act 14:16 who in the generations gone by allowed all the nations to walk in their own ways.
Act 14:17 Yet he didn't leave himself without witness, in that he did good and gave you rains from the sky and fruitful seasons, filling our hearts with food and gladness."
Act 14:18 Even saying these things, they hardly stopped the multitudes from making a sacrifice to them.
Act 14:19 But some Jews from Antioch and Iconium came there, and having persuaded the multitudes, they stoned Paul, and dragged him out of the city, supposing that he was dead.
Act 14:20 But as the disciples stood around him, he rose up, and entered into the city. On the next day he went out with Barnabas to Derbe.
Act 14:21 When they had preached the Good News to that city, and had made many disciples, they returned to Lystra, Iconium, and Antioch,
Act 14:22 confirming the souls of the disciples, exhorting them to continue in the faith, and that through many afflictions we must enter into the Kingdom of God.
Act 14:23 When they had appointed elders for them in every assembly, and had prayed with fasting, they commended them to the Lord, on whom they had believed.
Act 14:24 They passed through Pisidia, and came to Pamphylia.
Act 14:25 When they had spoken the word in Perga, they went down to Attalia.
Act 14:26 From there they sailed to Antioch, from where they had been committed to the grace of God for the work which they had fulfilled.
Act 14:27 When they had arrived, and had gathered the assembly together, they reported all the things that God had done with them, and that he had opened a door of faith to the nations.
Act 14:28 They stayed there with the disciples for a long time.

"THE SECOND EPISTLE TO THE CORINTHIANS" Chapter Three by Mark Copeland