Dogs and the exhibition of goodness 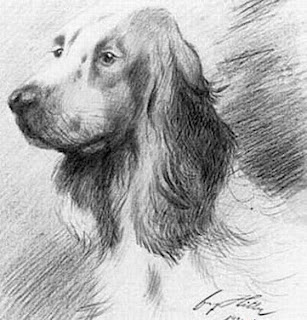 Over the past couple of years I have begun to re-think what I really like as a result of picking pictures for this blog.  Animals like this dog seem to be at the top of the list.  I especially like pencil drawings because somehow they seem to reflect the inner beauty of the artist.  Now, I freely admit I don't know any of them personally but the beauty that each picture exhibits says something for them all.  How nice they really are undoubtedly varies with the artist, but each a every one shows at least some goodness. Lets take this concept to its absurdity and consider a person whom most people would say is not a nice man; Pontius Pilate.
John 18:28-31 (WEB)

28) They led Jesus therefore from Caiaphas into the Praetorium. It was early, and they themselves didn’t enter into the Praetorium, that they might not be defiled, but might eat the Passover.
29) Pilate therefore went out to them, and said, “What accusation do you bring against this man?”
30) They answered him, “If this man weren’t an evildoer, we wouldn’t have delivered him up to you.”
31) Pilate therefore said to them, “Take him yourselves, and judge him according to your law.” Therefore the Jews said to him, “It is not lawful for us to put anyone to death,”

1) So Pilate then took Jesus, and flogged him.
2) The soldiers twisted thorns into a crown, and put it on his head, and dressed him in a purple garment.
3) They kept saying, “Hail, King of the Jews!” and they kept slapping him.
4) Then Pilate went out again, and said to them, “Behold, I bring him out to you, that you may know that I find no basis for a charge against him.”
5) Jesus therefore came out, wearing the crown of thorns and the purple garment. Pilate said to them, “Behold, the man!”
6) When therefore the chief priests and the officers saw him, they shouted, saying, “Crucify! Crucify!” Pilate said to them, “Take him yourselves, and crucify him, for I find no basis for a charge against him.”
7) The Jews answered him, “We have a law, and by our law he ought to die, because he made himself the Son of God.”
8) When therefore Pilate heard this saying, he was more afraid.
9) He entered into the Praetorium again, and said to Jesus, “Where are you from?” But Jesus gave him no answer.
10) Pilate therefore said to him, “Aren’t you speaking to me? Don’t you know that I have power to release you, and have power to crucify you?”
11) Jesus answered, “You would have no power at all against me, unless it were given to you from above. Therefore he who delivered me to you has greater sin.”
12) At this, Pilate was seeking to release him, but the Jews cried out, saying, “If you release this man, you aren’t Caesar’s friend! Everyone who makes himself a king speaks against Caesar!”
13) When Pilate therefore heard these words, he brought Jesus out, and sat down on the judgment seat at a place called “The Pavement,” but in Hebrew, “Gabbatha.”
14) Now it was the Preparation Day of the Passover, at about the sixth hour. He said to the Jews, “Behold, your King!”
15) They cried out, “Away with him! Away with him! Crucify him!” Pilate said to them, “Shall I crucify your King?” The chief priests answered, “We have no king but Caesar!”
16) So then he delivered him to them to be crucified. So they took Jesus and led him away.
17) He went out, bearing his cross, to the place called “The Place of a Skull,” which is called in Hebrew, “Golgotha,”
18) where they crucified him, and with him two others, on either side one, and Jesus in the middle.
19) Pilate wrote a title also, and put it on the cross. There was written, “JESUS OF NAZARETH, THE KING OF THE JEWS.”
20) Therefore many of the Jews read this title, for the place where Jesus was crucified was near the city; and it was written in Hebrew, in Latin, and in Greek.
21) The chief priests of the Jews therefore said to Pilate, “Don’t write, ‘The King of the Jews,’ but, ‘he said, I am King of the Jews.’”
22) Pilate answered, “What I have written, I have written.”


Pilate was a Roman Governor, and as such had a duty to act in the best interest of the Roman Emperor.  He did what he had to do to keep the peace and collect taxes.  His callousness towards the life of Jesus shows the brutality of the empire and the immorality of acting according to the rules of expediency.  However, even this person was used by God, for his sign says it all: "JESUS OF NAZARETH, THE KING OF THE JEWS".  And his testimony confirms the fact: "What I have written, I have written".  So, even bad people can show goodness, if God desires to work through them.  I just wonder what God had in mind by the picture of the dog, for its architech was Adolph Hitler???
Email ThisBlogThis!Share to TwitterShare to FacebookShare to Pinterest
Newer Posts Older Posts Home
Subscribe to: Posts (Atom)