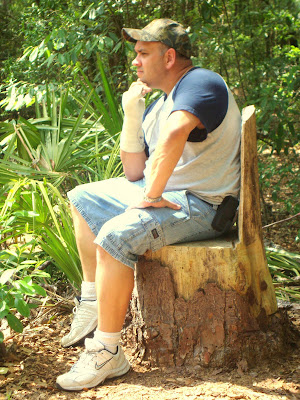 This is my son-in-law, Mike. Normally, he is doing something, so this picture is quite unusual! Lately, with a broken hand, he has had a lot of time to think; but I couldn't help but wonder what he was so engrossed about. He never seems to have to think about anything much, as he always knows his mind on everything. Some things will make anyone stop and ponder awhile and the following events would make anybody stop and reflect.


Acts 12:7-17 (WEB)
7) And behold, an angel of the Lord stood by him, and a light shone in the cell. He struck Peter on the side, and woke him up, saying, “Stand up quickly!” His chains fell off from his hands.
8) The angel said to him, “Get dressed and put on your sandals.” He did so. He said to him, “Put on your cloak, and follow me.”
9) And he went out and followed him. He didn’t know that what was being done by the angel was real, but thought he saw a vision.
10) When they were past the first and the second guard, they came to the iron gate that leads into the city, which opened to them by itself. They went out, and went down one street, and immediately the angel departed from him.
11) When Peter had come to himself, he said, “Now I truly know that the Lord has sent out his angel and delivered me out of the hand of Herod, and from everything the Jewish people were expecting.”
12) Thinking about that, he came to the house of Mary, the mother of John whose surname was Mark, where many were gathered together and were praying.
13) When Peter knocked at the door of the gate, a maid named Rhoda came to answer.
14) When she recognized Peter’s voice, she didn’t open the gate for joy, but ran in, and reported that Peter was standing in front of the gate.
15) They said to her, “You are crazy!” But she insisted that it was so. They said, “It is his angel.”
16) But Peter continued knocking. When they had opened, they saw him, and were amazed.
17) But he, beckoning to them with his hand to be silent, declared to them how the Lord had brought him out of the prison. He said, “Tell these things to James, and to the brothers.” Then he departed, and went to another place.
Herod was not someone you wanted to have angry with you. If you were imprisoned, you probably would never come out alive (remember John the Baptist). But God delivered Peter from certain death and while he was going to the house of Mary, he thought about what this meant. Can you really blame him? I would be a bit preoccupied myself. Then the business with Rhoda (which I always thought was funny) and finally the testimony to James and the brothers. The book of Acts tells of the practices of the Apostles of Jesus, but in this unusual situation we are given insight into what Peter was thinking. I can imagine Peter's thoughts coming back to the events of the day just before he fell asleep that night, can't you? When God acts in your life, sit back and think about it; you just might get to know God a little better. As for Mike, well, he is concentrating so hard, he looks like he just can't figure things out. You might say:He is stumped!
Email ThisBlogThis!Share to TwitterShare to FacebookShare to Pinterest
Newer Posts Older Posts Home
Subscribe to: Posts (Atom)