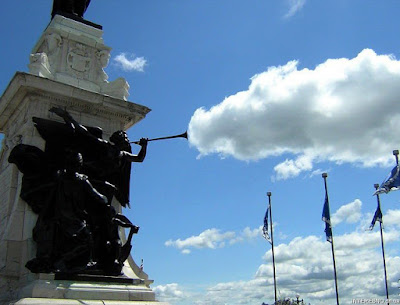 In Real Estate, the three most important selling points are: Location, Location, Location!!!  So, whoever took this picture had to be in the right place at the right time (with a camera of course).  It does make me think of heaven and that gives me comfort, as does the following passage from the book of Thessalonians.
1 Thessalonians 4:13-18 (WEB)

13) But we don’t want you to be ignorant, brothers, concerning those who have fallen asleep, so that you don’t grieve like the rest, who have no hope.

14) For if we believe that Jesus died and rose again, even so God will bring with him those who have fallen asleep in Jesus.

15) For this we tell you by the word of the Lord, that we who are alive, who are left to the coming of the Lord, will in no way precede those who have fallen asleep.

16) For the Lord himself will descend from heaven with a shout, with the voice of the archangel, and with God’s trumpet. The dead in Christ will rise first,

17) then we who are alive, who are left, will be caught up together with them in the clouds, to meet the Lord in the air. So we will be with the Lord forever.

18) Therefore comfort one another with these words.


Face it, this world can be a depressing place.  Wars, famine, greed, murder, social injustice and the like is enough to get anyone down.  Yet, Jesus gives hope, hope of something better: life after life!!  That's a pretty good thing to think about; to know that no matter how bad things are in the here and now, someday they WILL BE BETTER!!!  Not just in a general way, either.  Jesus cares for each and every one of us as this passage about the "rapture" shows.  In this world of sin that's something to blow your horn about!!!
Email ThisBlogThis!Share to TwitterShare to FacebookShare to Pinterest

Jos 17:5 Ten parts fell to Manasseh, besides the land of Gilead and Bashan, which is beyond the Jordan;

Jos 17:6 because the daughters of Manasseh had an inheritance among his sons. The land of Gilead belonged to the rest of the sons of Manasseh.

Jos 17:7 The border of Manasseh was from Asher to Michmethath, which is before Shechem. The border went along to the right hand, to the inhabitants of En Tappuah.

Jos 17:8 The land of Tappuah belonged to Manasseh; but Tappuah on the border of Manasseh belonged to the children of Ephraim.

Jos 17:9 The border went down to the brook of Kanah, southward of the brook. These cities belonged to Ephraim among the cities of Manasseh. The border of Manasseh was on the north side of the brook, and ended at the sea.

Jos 17:10 Southward it was Ephraim's, and northward it was Manasseh's, and the sea was his border. They reached to Asher on the north, and to Issachar on the east.

Jos 17:12 Yet the children of Manasseh couldn't drive out the inhabitants of those cities; but the Canaanites would dwell in that land.

Jos 17:13 It happened, when the children of Israel had grown strong, that they put the Canaanites to forced labor, and didn't utterly drive them out.

Jos 17:14 The children of Joseph spoke to Joshua, saying, "Why have you given me just one lot and one part for an inheritance, since I am a great people, because Yahweh has blessed me so far?"

Jos 17:15 Joshua said to them, "If you are a great people, go up to the forest, and clear land for yourself there in the land of the Perizzites and of the Rephaim; since the hill country of Ephraim is too narrow for you."

Jos 17:16 The children of Joseph said, "The hill country is not enough for us. All the Canaanites who dwell in the land of the valley have chariots of iron, both those who are in Beth Shean and its towns, and those who are in the valley of Jezreel."

Jos 17:17 Joshua spoke to the house of Joseph, even to Ephraim and to Manasseh, saying, "You are a great people, and have great power. You shall not have one lot only;

Jos 18:1 The whole congregation of the children of Israel assembled themselves together at Shiloh, and set up the Tent of Meeting there. The land was subdued before them.

Jos 18:2 Seven tribes remained among the children of Israel, which had not yet divided their inheritance.

Jos 18:3 Joshua said to the children of Israel, "How long will you neglect to go in to possess the land, which Yahweh, the God of your fathers, has given you?

Jos 18:4 Appoint for yourselves three men from each tribe. I will send them, and they shall arise, walk through the land, and describe it according to their inheritance; and they shall come to me.

Jos 18:6 You shall survey the land into seven parts, and bring the description here to me; and I will cast lots for you here before Yahweh our God.

Jos 18:7 For the Levites have no portion among you; for the priesthood of Yahweh is their inheritance. Gad, Reuben, and the half-tribe of Manasseh have received their inheritance beyond the Jordan eastward, which Moses the servant of Yahweh gave them."

Jos 18:8 The men arose and went. Joshua commanded those who went to survey the land, saying, "Go walk through the land, survey it, and come again to me. I will cast lots for you here before Yahweh in Shiloh."

Jos 18:9 The men went and passed through the land, and surveyed it by cities into seven portions in a book. They came to Joshua to the camp at Shiloh.

Jos 18:10 Joshua cast lots for them in Shiloh before Yahweh. There Joshua divided the land to the children of Israel according to their divisions.

Jos 18:12 Their border on the north quarter was from the Jordan. The border went up to the side of Jericho on the north, and went up through the hill country westward. It ended at the wilderness of Beth Aven.

Jos 18:13 The border passed along from there to Luz, to the side of Luz (the same is Bethel), southward. The border went down to Ataroth Addar, by the mountain that lies on the south of Beth Horon the lower.

Jos 18:14 The border extended, and turned around on the west quarter southward, from the mountain that lies before Beth Horon southward; and ended at Kiriath Baal (the same is Kiriath Jearim), a city of the children of Judah. This was the west quarter.

Jos 18:15 The south quarter was from the farthest part of Kiriath Jearim. The border went out westward, and went out to the spring of the waters of Nephtoah.

Jos 18:17 It extended northward, went out at En Shemesh, and went out to Geliloth, which is over against the ascent of Adummim. It went down to the stone of Bohan the son of Reuben.

Jos 18:18 It passed along to the side over against the Arabah northward, and went down to the Arabah.

Jos 18:19 The border passed along to the side of Beth Hoglah northward; and the border ended at the north bay of the Salt Sea, at the south end of the Jordan. This was the south border.

Jos 18:20 The Jordan was its border on the east quarter. This was the inheritance of the children of Benjamin, by the borders around it, according to their families.

Jos 18:21 Now the cities of the tribe of the children of Benjamin according to their families were Jericho, Beth Hoglah, Emek Keziz,

Jos 18:28 Zelah, Eleph, the Jebusite (the same is Jerusalem), Gibeath, and Kiriath; fourteen cities with their villages. This is the inheritance of the children of Benjamin according to their families.
Email ThisBlogThis!Share to TwitterShare to FacebookShare to Pinterest

Joh 2:1 The third day, there was a marriage in Cana of Galilee. Jesus' mother was there.

Joh 2:2 Jesus also was invited, with his disciples, to the marriage.

Joh 2:4 Jesus said to her, "Woman, what does that have to do with you and me? My hour has not yet come."

Joh 2:5 His mother said to the servants, "Whatever he says to you, do it."

Joh 2:6 Now there were six water pots of stone set there after the Jews' manner of purifying, containing two or three metretes apiece.

Joh 2:7 Jesus said to them, "Fill the water pots with water." They filled them up to the brim.

Joh 2:10 and said to him, "Everyone serves the good wine first, and when the guests have drunk freely, then that which is worse. You have kept the good wine until now!"

Joh 2:11 This beginning of his signs Jesus did in Cana of Galilee, and revealed his glory; and his disciples believed in him.

Joh 2:12 After this, he went down to Capernaum, he, and his mother, his brothers, and his disciples; and they stayed there a few days.

Joh 2:13 The Passover of the Jews was at hand, and Jesus went up to Jerusalem.

Joh 2:14 He found in the temple those who sold oxen, sheep, and doves, and the changers of money sitting.

Joh 2:15 He made a whip of cords, and threw all out of the temple, both the sheep and the oxen; and he poured out the changers' money, and overthrew their tables.

Joh 2:16 To those who sold the doves, he said, "Take these things out of here! Don't make my Father's house a marketplace!"

Joh 2:17 His disciples remembered that it was written, "Zeal for your house will eat me up."

Joh 2:18 The Jews therefore answered him, "What sign do you show us, seeing that you do these things?"

Joh 2:19 Jesus answered them, "Destroy this temple, and in three days I will raise it up."

Joh 2:20 The Jews therefore said, "Forty-six years was this temple in building, and will you raise it up in three days?"

Joh 2:22 When therefore he was raised from the dead, his disciples remembered that he said this, and they believed the Scripture, and the word which Jesus had said.

Joh 2:23 Now when he was in Jerusalem at the Passover, during the feast, many believed in his name, observing his signs which he did.

Joh 2:24 But Jesus didn't trust himself to them, because he knew everyone,

Joh 2:25 and because he didn't need for anyone to testify concerning man; for he himself knew what was in man.
Email ThisBlogThis!Share to TwitterShare to FacebookShare to Pinterest
Newer Posts Older Posts Home
Subscribe to: Posts (Atom)