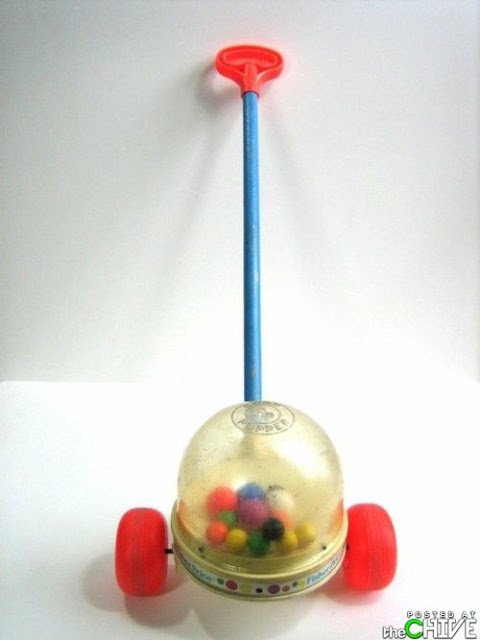 Before I took a close look at it, I knew what it was... a popper.  It was only after I looked at the top of the dome did I realize I was correct.  This was the first toy our oldest child played with after she learned to walk.  And not only her, but the rest of the children did as well.  They loved playing with this for many years.  Its such a simple thing; not even the smallest mirco-chip, but it provided a great deal of joy!!!  Sometimes simple is better; perhaps most of the time that is true!!!  When it comes to religious matters, I KNOW this is true; WHY?  Because God tells me so....

Jeremiah, Chapter 6
16 Thus says Yahweh, “Stand in the ways and see, and ask for the old paths, ‘Where is the good way?’ and walk in it, and you will find rest for your souls.....

But, you say... innovation is GOOD; I want the NEW, THE CREATIVE, you know, something exciting, something modern.  But, think about it for a minute; IF GOD REALLY IS WHO HE SAYS HE IS, THEN... THINGS DON'T CHANGE!!!!!  Since we know HE doesn't play favorites, then the eariliest humans must be on equal footing with modern man when it comes to fellowship and worship with the Almighty.  Sometimes, older really is better; whether it comes to a toy or being closer to the creator of the universe.  Think about it....

"ACTS OF THE APOSTLES" Chapter Twenty-Eight by Mark Copeland